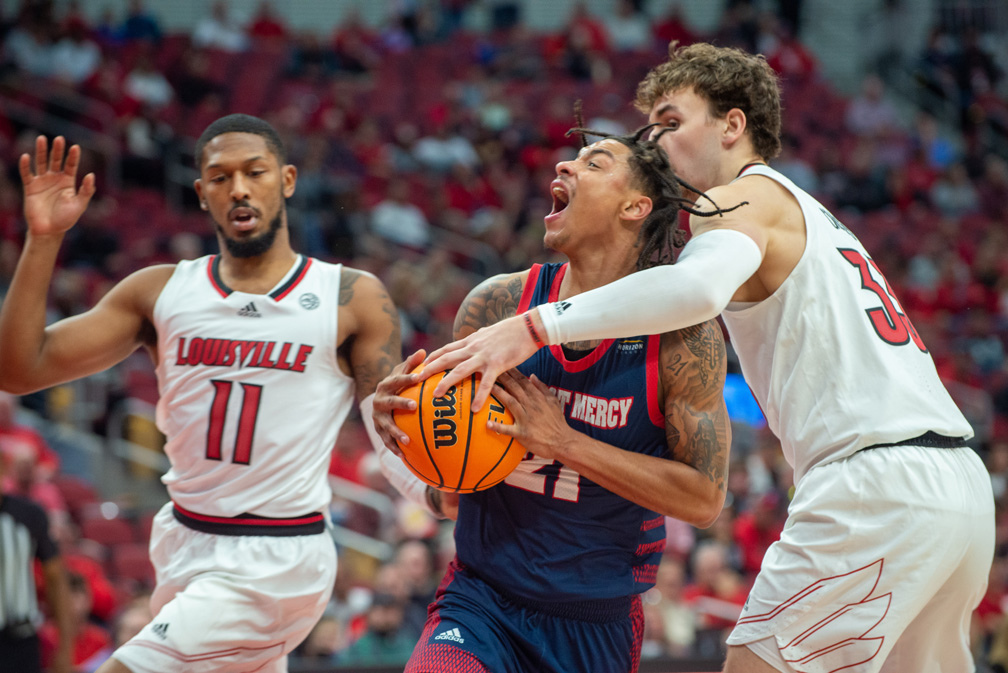 “Credit to a really, really talented Detroit team. We knew they would come in here and push us on the defensive end because of their individual talent. They have some guys who can really score the ball, starting with Antoine Davis.  He goes for 27 points. It took a lot of shots to get them but he’s been averaging about 20 shots per game.  Obviously, (Madut) Akec goes for 19 (points) and 10 (rebounds). We were concerned about Kevin McAdoo coming into the game. We did a pretty good job on him. We challenged Noah Locke this week in practice to do a good job. He and the other guys did a good job on him (McAdoo).  Detroit is a tough team because they can really score the ball. They can make threes. They had nine threes. They shoot a lot of threes. Anytime you can make a three, you can stay in the game. That being said, you cannot accept in victory which you wouldn’t accept in defeat.  I did not think we guarded the ball very well today. I don’t think that we guarded the three-point line very well. I thought there were some times when we really miscommunicated on some switches. Guys were able to get to the lane and either get to the rim or spray out. Although we won the rebounding margin, the rebounding battle by four. There were still way too many offensive rebounds. They got 11 offensive rebounds. Like I said in the last press conference, I hate to have to come back in here and say it again. That means our coaching staff has to do a better job of convincing our guys that it matters. We couldn’t have emphasized it more in the last few days. We have to get better all-around on the defensive end and on the glass. That was where my main concern was.”

(Does it bother you to take a step back when the ball pressure was so good against Navy?)

“Absolutely, we came into the game wanting to pick these guys up full court and turn them, knowing they only play seven or eight guys. I wanted to press more. That is probably on me for not making that call. But I didn’t think our full court man-to-man was good enough in order to apply even more pressure. I thought we would get hurt on the back end. They were shooting the ball so well when they got the ball in the front court. They kind of danced and did what they wanted to do. We didn’t harass the ball. We didn’t get into guys the way we did against Navy.  Their individual talent across the board was better than Navy’s. Navy had a couple of guys who could handle it, but for the most part, they had guys looking to shoot it who could only shoot it. Whereas these guys, Detroit, had guys who could do both. That presents a different challenge. This is what it is. We play Mississippi State, the ACC and Power 5 teams. You are going to see guys who can do both. And, we have to do a better job of guarding those guys.”

(On rebounding – when you watch film, what is missing?)

“I think we’re missing a physicality on the glass. I think that when the shot goes up, we have too many guys watching, and not enough guys hitting right away. As soon as the shot goes up, we should be looking for the closest guy to absolutely nail and we aren’t doing that, and it’s frustrating.”

“I think it was pretty apparent, unfortunately. I expect more from Jae’Lyn (Withers). We all do. He’s a better player than he showed today. But more importantly, and to your point, no matter what’s going on, on the offensive end, no matter how bad of a night it is for you or anybody else in that locker room. You owe it to your teammates to commit to defending and rebounding. That’s where my disappointment lies – with him and a few other guys as well.”

(On defense leaving the corners)

“We never want to help out of the strong side corner. But the fact of the matter is, if you’re in that strong side corner and you see the ball coming downhill, it’s hard to not pull in and want to provide some help. That goes back to our inability to guard the ball. But we do need to uphold our defensive standards and what we work on every day and not help from the strong side corner. We need to get that help from the backside. We need to get big guys coming over and protecting the rim when we do get beat. We’re not going to always keep the ball out of the paint, although that’s our objective. When guys do occasionally get beat, and right now it’s happening far too often. We need big guys coming over and making a hard play on the ball. That didn’t happen enough tonight.”

(On when the defense was playing well)

“That’s how we should look. That’s the fun way to play. That’s how we want to play. Unfortunately, we didn’t have enough stretches where we were able to do that which is really hard, because it’s all we talked about the last few days leading up to the game. The game was easier, and the game was more fun when we could get a stop, rebound and run, and get out in transition. We have some guys that can shoot the ball and push the pace, but you can’t get into that style of play if you’re constantly taking the ball out of the net.”

(How much of that is mindset or lack of focus or a combination of both?)

“Probably a little bit of both. I would like to think that… first of all, let me just say this, our team has not embraced what the defensive identify of this team needs to be. We haven’t embraced that yet. I thought that we were moving in the right direction against Navy. We said in the huddle at some point, maybe in the first half, ‘let’s hold these guys to 60.’ And they got exactly 60. And guys were into it. Maybe I need to set a number every game. But we have not embraced having that defensive identity of guarding the ball, keeping it out of the paint, gapping the ball, being there on the catch, taking away rhythm threes – all the things we talk about every day – enough to allow us to get into those stretches like we had in the first half when we were able to get stops and run. That has to come from our leadership in the locker room and has to filter down to everybody that’s on the floor.”

(It seemed like the half court execution offensively was bit disjointed – Dre Davis ended up taking six threes tonight- are you comfortable with that?)

“I think he took one or two that were a little ill-advised, but I thought the other ones were good ones he just didn’t knock them down. I thought Dre was great. I know a lot of people have been hard on Dre, he’s hard on himself. He couldn’t care less what people think, but he’s hard on himself and sometimes that prevents him from playing at his best. So, it was good to see him do good things. Without Dre Davis, we don’t win this game. Not only the 18 points, but the fact that he gets four offensive rebounds and one of those plays that led to a spark was him addressing something that I really got on him in film. The previous game, he tried to dribble a loose ball. That’s a cardinal sin, you dive on a loose ball. He dove on a loose ball today and ignited a break which led to a layup. That’s growth! That’s what you want to see from your guys.”

“Well, if that is the mindset of these guys, then we have the wrong mindset. As you can see none of these were easy. Even Navy we pull away late, but that was a tough game. And every one of these other ones were tough. I don’t expect for us to turn on a switch. We have to get better, and it doesn’t matter who we play whether it’s an ACC school, SEC school, a MAC school. We have to do some things a lot better on the defensive end and on the glass in order to beat anybody.”

“We felt like Noah had a good rhythm offensively, he goes 4-of-6 from three (point range), 6-of-9 (total). He was good offensively today, I thought he was good both ways (offensively and defensively). He really put a concerted effort together defensively, he made shots, we’re accustomed to him doing that. He’s a guy that we definitely want to get the ball in his hands at the end of the game, because he can do both: he can put it down and create a shot and also make jump shots. He hit a really tough shot. I’ll give Coach Ross (McMains) a lot of credit, he drew that one up. We talked about trying to get it in (Locke’s) hands. We actually drew something up that we hadn’t spent a lot of time running, and we were able to execute. And Noah hit a really difficult shot, but he’s a guy who can make those types of shots. He’s just got to give us that type of defensive effort when he goes 1-of-6 from three and 4-of-6 from three, but he was great today.”

“I’m not exactly sure (on Matt Cross), I don’t want to get ahead of myself on that. It sounds like dehydration has something to do with it, so we just couldn’t play him physically, he just couldn’t go. He’s a tough kid who would have loved to have gone, but he just didn’t have the energy to play. We were worried about him, so we kept him out. As far as Mason (Faulkner), we need more from Mason. He had a rough go at it in the first half. I didn’t like his response, so I didn’t play him in the second half.”

“(Noah) Locke hit a very big shot and I thought (Jarrod) West was really good defensively and (Dre) Davis had his best game with 18 points. They had some guys step up when they needed to, and they made the right plays. I’m proud of my guys because we never quit. There was a situation where we could easily have said, ‘Okay, the game is over with,’ but we came all the way back and tied it up, which was big for us.”