Skip to content
You are here
HOME PAGE > 01 FEATURED > UK VB: Stumler’s 14 Kills Push No. 8 Kentucky to Sweep of Auburn 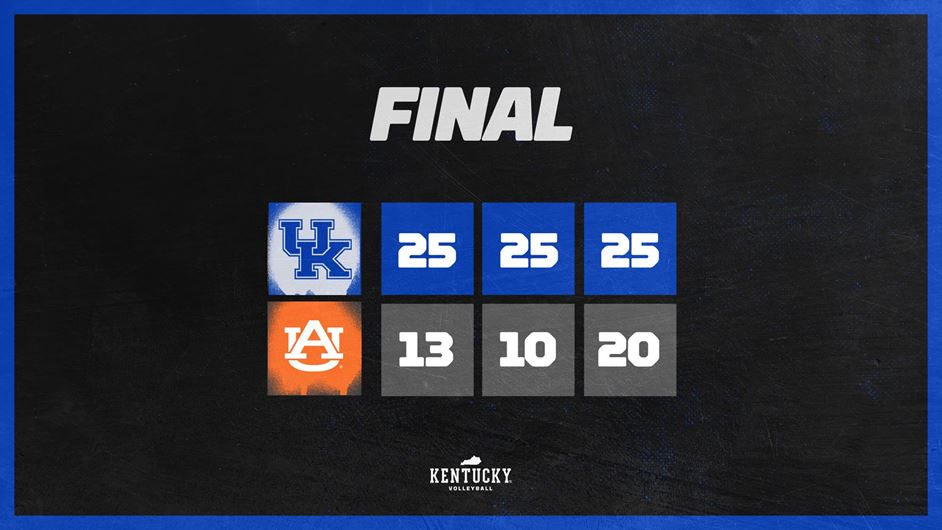 Wildcats sweep Auburn in first of two matches on The Plains

Kentucky came out strong, winning the first two sets by holding the Tigers to 13 and 10 points with the Wildcats hitting above .330 in both of the opening frames. The Wildcats held Auburn to .000 hitting in the first set, marking the third-straight set that Kentucky had held its opponents to .000 or below on the season.

UK improves to 21-4 on the season with Saturday’s result and retains its one-match lead in the Southeastern Conference with a 14-1 league record. Auburn falls to 13-12 overall and is 5-10 in SEC play this season.

Sophomore outside Madi Skinner had 10 kills on 20 swings for Kentucky, with junior middle blocker Azhani Tealer registering seven kills on just 16 swings and five digs with a pair of blocks.

RS-Sophomore Bella Bell had a match-high five blocks on the afternoon with two kills on four offensive swings to go with her defensive stops. Bell held the Tigers to .028 hitting in the match.

Emma Grome led the UK offense to a .324 percentage, above .200 in all three sets, and registered 33 assists on 45 Kentucky kills in the match. Grome also had a pair of stuffs and 10 digs, marking another double-double for one of the best freshman setters in the nation.

Kentucky plays its final road match Sunday at 2 p.m. ET against the Auburn Tigers to close out the two-match SEC series. The showdown will be broadcasted live on the SEC Network+, ESPN3 and the ESPN app.

Kentucky got a strong start with an early kill from Regan Rutherford on the opening point followed by a block on the left side to give UK the first two points of the match. Kentucky extended its lead on Madi Skinner’s first kill of the match to expand its lead to four at 6-2. A kill by Azhani Tealer along the right pin sent the match into a media timeout as the Wildcats led 15-10 at the stoppage and was holding AU to under .200 hitting at that moment in the match. Kentucky’s 2-0 run going into the media timeout was extended to a 6-0 run thanks to Madi Skinner’s fifth kill of the set to push Kentucky into a 19-10 lead and forced Auburn into its first timeout. A Rutherford and Bell block ended the first set, as UK took the opener, 25-13. Auburn hit .000 in the frame, marking the third-straight set UK has held its opponents under .000 in the season dating back to last weekend.

A 6-0 Kentucky run created the first degree of separation in the second set as UK ran off a half dozen in a row to make it 8-2. Stumler’s seventh kill of the match on one of the longer rallies of the match to that point sent the match into a media timeout with Kentucky leading, 15-7, its largest lead of the set. Bella Bell’s second kill of the day gave Kentucky a 10-point lead at 18-8 and the Wildcats played add-on in the next rally thanks to an Auburn hitting error thanks to the defense of Sophie Fischer. Kentucky’s lead ballooned to as many as 14 points, as it led 24-9 after a kill from Reagan Rutherford, her fifth of the match to put Kentucky at set point. On set point, Stumler’s 11 kill of the match put the frame in the books, as UK closed on a 5-1 run and hit .448 in the set with five blocks from Bella Bell making the difference as the Wildcats went 2-0 up in the match.

Kentucky rotated in some younger players into the lineup in the third set, as Sophie Fischer and Elise Goetzinger both started their first sets of the month for the Wildcats. After Auburn took an early five-point lead in the set at 7-2 and Kentucky called a timeout, the Wildcats went on a 6-0 run to take its first lead at 12-11 and Auburn called its first timeout of the set. Emma Grome’s second block of the match made it 18-16 Kentucky as UK tied its largest lead of the set and AU burned its final timeout. A kill by Fischer ended the match and Kentucky closed the book on its fifth-straight sweep.