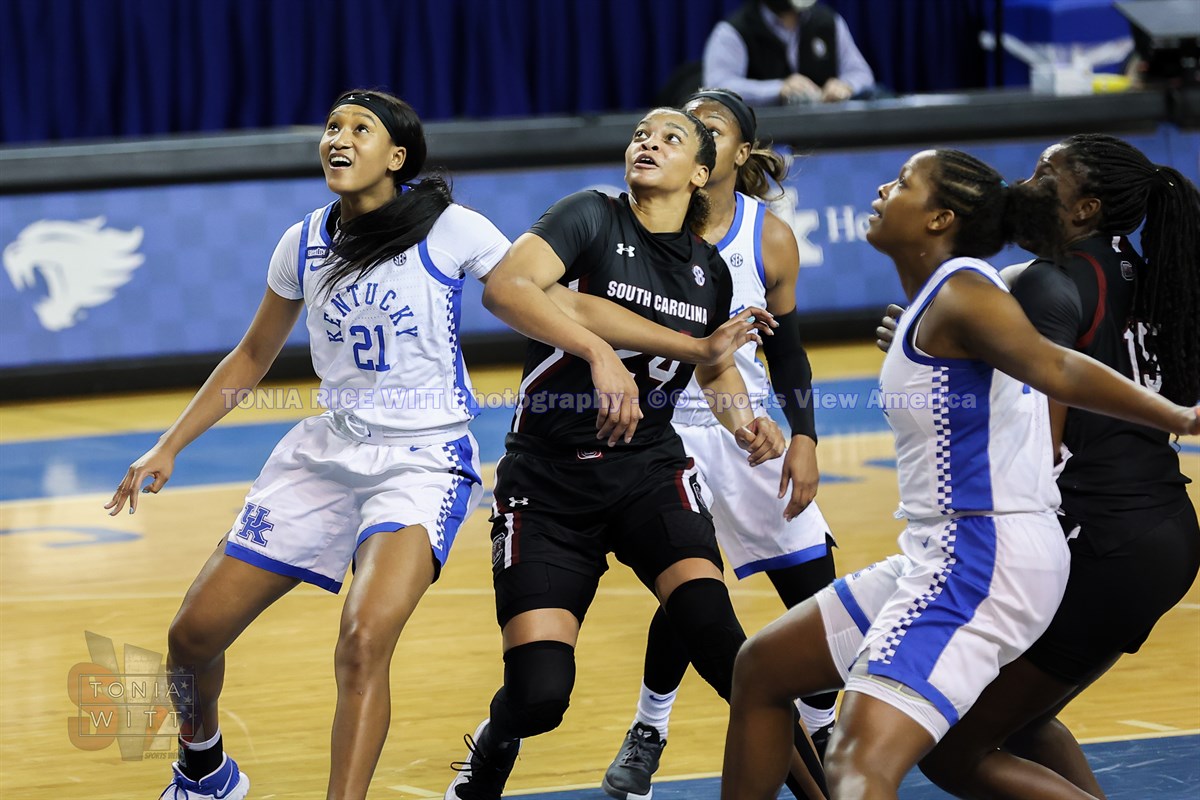 Kentucky (9-3, 2-2 SEC) got 12 points and seven rebounds from Dre’una Edwards and 12 points from Chasity Patterson.

For Howard, it was the second time that she has scored at least 30 points in a game this season and the fifth time in her UK career. Howard moved into 17th place on UK’s career scoring list on Sunday, passing Belitta Croley, Kristi Cushenberry and Taylor Murray. Howard now has 1,362 points in her three-year UK career.

After the teams combined to miss their first eight shots, five by Kentucky and three by South Carolina, the Gamecocks got on the board on a Victaria Saxton layup. Kentucky answered with a Howard driving layup, and a free throw, to take a 3-2 lead. After a South Carolina basket, Kentucky got a Patterson layup to take a 5-4 lead.

South Carolina would score four in a row, taking an 8-5 lead in the process. But Howard would score six straight for the Cats as UK took an 11-8 lead with 4:05 left in the first. Those were the first points in a 14-4 run that gave Kentucky a 19-12 advantage. UK would lead 19-15 after one period.

South Carolina scored the first three points of the second quarter to cut the UK lead to 19-18. But the Cats answered with a three from Blair Green and a jumper from Howard to lead 24-18. After South Carolina got within two, 24-22, the Cats went on a 7-2 run to take a 31-24 lead with 3:37 left in the period.

The Gamecocks then went on a 7-2 run of their own to cut the UK advantage to 33-31 with 2:09 left in the half. But the Cats closed the quarter on an 8-1 run, including the final six points of the half, to grab a 41-32 lead at the break. Howard led all scorers with 19 points at the break.

South Carolina started the second half with an 8-2 run to cut the UK lead to 43-40 with 7:20 left in the third. Kentucky then scored five of the next six, including a three-point play by Howard, to stretch the advantage to 48-41.

Kentucky would lead 56-48 late in the third before South Carolina scored the final nine points of the period to take a 57-56 into the final 10 minutes.

Howard scored the first basket of the fourth quarter to give UK a 58-57 lead but South Carolina would run off eight straight points to grab a 65-58 advantage with 7:21 to go, forcing a Kentucky timeout.

Kentucky got a basket from Howard out of the timeout, but South Carolina got four points in a row from Destanni Henderson to grab their biggest lead of the game, 69-60, with 4:29 to play.

The Cats would not go away, especially Patterson. The senior guard from Houston scored eight points in a row, including back-to-back three-pointers, to cut the deficit to 69-68 with 2:31 to play. The Cats would have a chance to take the lead on their next possession, but Howard missed an open three from the top of the key.

After South Carolina missed a pair of free throws with 25 seconds to play, the Cats had a chance to tie. Howard’s off-balance three missed, as did Edwards’ put back attempt and the Gamecocks got the rebound.

South Carolina’s Zia Cooke was fouled with 10.3 seconds left and made both free throws to give the Gamecocks a 75-70 advantage. That would be the final score.

Kentucky returns to action on Thursday, visiting Auburn for an SEC contest. The game is set to tip off at 8:30 p.m. ET and can be seen on the SEC Network.

WOMEN’S BASKETBALL POSTGAME QUOTES – NO. 10 KENTUCKY VS. NO. 5 SOUTH CAROLINA

On the difference between the first half and the second half…

On how Aliyah Boston has progressed since last season…

“She definitely came out looking to play smarter because she did pick up two quick fouls in the first half, so she just continued to be a big body down there, which they need, and just, and I heard her telling her teammates a lot of stuff, so she was being a leader on the floor, so, I didn’t hear that last year from her.”

On beginning the conference season playing all of the ranked teams…

On struggling from the 3-point line the last few games…

“Um, I don’t think that there is anything wrong. I think they’re just not falling. We do get a look of good looks, and we take a lot of 3s throughout the game. So, they’ll start falling, I guess we’re just in a slump right now.”

“Uh, personally, I do think I am the best in women’s college basketball and I also think that I have proven it to everyone over these last couple of games.”

On beginning the conference season playing all of the ranked teams…

“Well, I love the resilience of this team. We play together. We are tough. We have heart. What I told the players, you know, our margin of error is just so small. So, for three-and-a-half quarters against South Carolina tonight, against A&M, we played high caliber basketball. However, the small mental lapses cost us, and great teams expose you, so in order for us to take that next level, we have to be able to play for 40 minutes.”

“Well, the positives that we can takeaway, you know, we came here to win. We talked about that pregame. We were not going to play afraid. We were not going to play aggressive. Majority of the game, we did do that. Rhyne Howard continued to show why she is the best player, but you know, I like what we did offensively. We pushed the tempo. We played out of the ball screen extremely well. Rhyne hit some shots, but I thought we kept our offensive moving. We executed our offense a lot better today than we did at A&M, which is a positive. You know, even our one-on-one defense early, I thought we did some good things, forced them to take some tough shots. So, what we can take away from this, we are a very talented team. We have the pieces, we have a chance to really take this team to the next level. There are small things that we have to fix.”

“Well, that’s the thing about having depth. So, Rhyne Howard, who obviously was scoring, but Dre’una Edwards who has not been playing well, I thought she came in and made some big plays. So, we have people that can score. So, I’m not worried about our scoring. We have playmakers on the floor, and it might be different people every game, and that is ok. Right now, I am more disappointed in our transition defense. We really didn’t step up as a guard unite, get the ball stopped, but once again, we are a work in progress and we have to go back to work. Unfortunately, it cost us tonight, along with offensive rebounds, but this is how you grow. You continue to learn, grow, get better and move forward.”

On if you’re disappointed no charges were taken…

“Well, of course we’re disappointed, we didn’t get the stops on the end. Like I said, South Carolina, a great team, our margin of error is so small, so the defensive fundamentals, one-on-one defense, building a wall when we help over, we have to take the charge instead of trying to block the shot, help the helper, but we’ll continue to get better. But make no mistake about it. We came here with the intensity that we needed, and we did fight. We don’t believe in moral victories. We have the intention, every time we take the floor, to win. But there are things that we have to do consistently for 40 minutes, and one of those things in transition defense and boxing out.”

“I mean, it’s great to have Rhyne Howard. A lot of coaches would love to have Rhyne Howard. Um, she is a bucket getter, however, I will say this again, she can fill up a stat sheet. So, she does score, but she can rebound, she got down and played defense tonight, and her ability to create shots for others, I want to make sure people don’t miss that. And then, our transfers have been huge for us. Robyn Benton didn’t necessarily shoot the ball well tonight, but she came hard defensively, she came up with some steals, she will go get you some rebounds. Jazmine Massengill is another athletic guard that is big, a high basketball IQ, she hit some crucial buckets for us today as well. Olivia Owens, they just give us depth, so she is willing to come in, bang, get offensive rebounds, gives us some size in the post, so we’re going to need all three of those to help take us where we’re trying to go.”

“Well, she came in and watched film. Dre was pressing. She was trying to play extremely fast offensively, so she had the turnovers, and then it became mental, so she went back to the fundamentals, went back to the practice court, worked on her shots, slowing down, but majority of it is just mental, knowing that she can score when she needs to. But, we just try to bring her off the bench today, take the focus off just scoring every time the ball touches her hands, so we talked to her about going to get offensive rebounds, playing as hard as she can play, and allow herself to score within the offense and she did that tonight.”

On if the last possession was scripted…

“Well, we actually were going to go for a quick two. However,, you know, I trust Rhyne. She has great instincts and play off of it. If she’s open, I give her the freedom to make that read take that shot, and we can live with that shot.”

WOMEN’S BASKETBALL POSTGAME NOTES – NO. 10 KENTUCKY VS. NO. 5 SOUTH CAROLINA