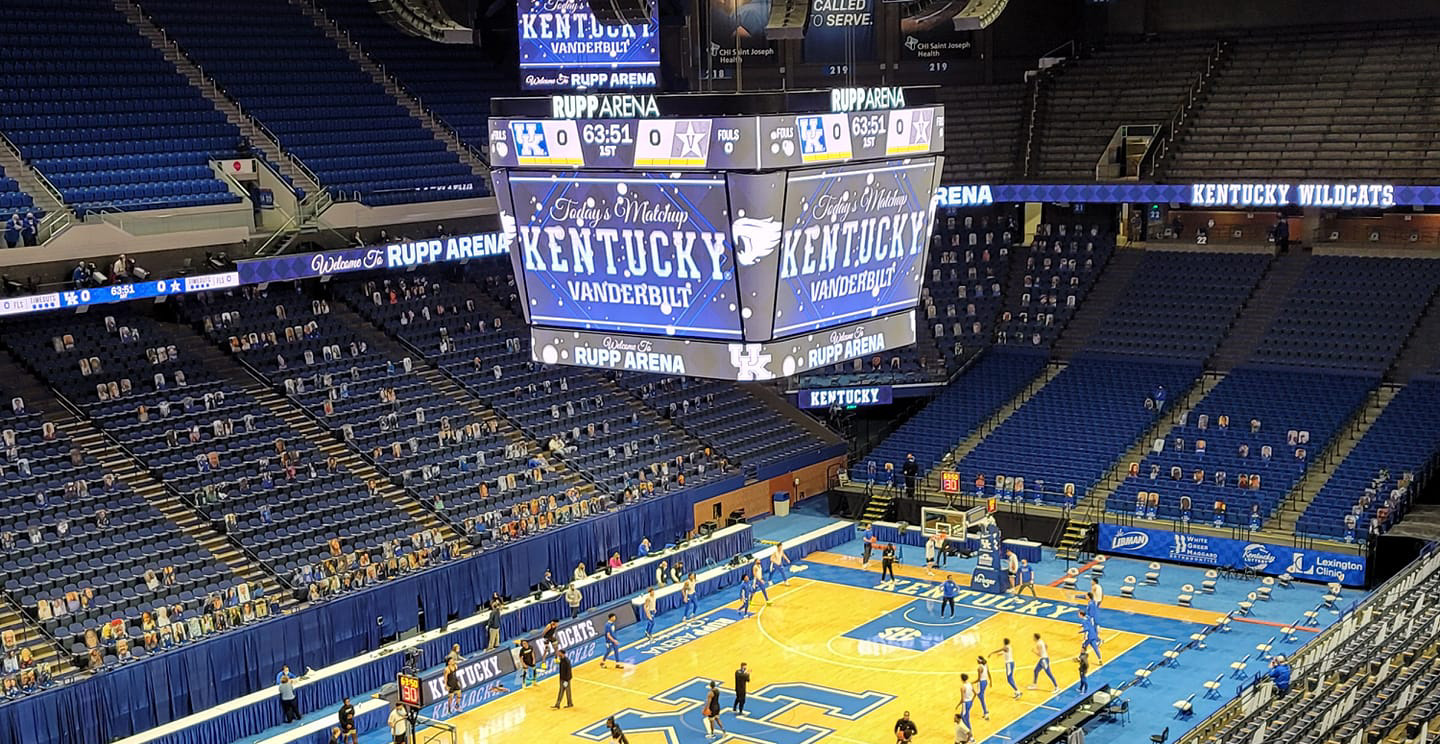 The top two teams in the SEC standings faced off in Rupp Arena tonight as the Kentucky Wildcats (3-0) hosted the Alabama Crimson Tide (4-0). A win would also be the ninth win in a row at Rupp Arena for the Cats when they have faced the Crimson Tide. However, the Wildcats knew that they would have their work cut out defensively if they were going to stop Alabama, who averages nearly 10 more points a game than the Cats. Kentucky had confidence in their defense coming into tonight’s match-up ranked fourth in the nation in block percentage of 15.8%, but did not show it on the court.

The Cats defense did not show its dominance in the first half letting Alabama hit 10 of 22 three-pointers. That gave the Crimson Tide a 42-30 advantage going into the half. Kentucky’s backcourt played good during the first half with Dontaie Allen and Devin Askew with eight points each to lead the Cats. The front court on the other hand could not match the physical opponents from Alabama and only contributed eight points all together. UK turned the ball over 10 times in the first twenty minutes which led to 14 of the Crimson Tide’s points.

The lackluster performance continued into the second half as Alabama led by double digits the entire second half and by 20 at one point. An eight-point run pulled the Cats within 12 with 5:22 left to play, but that is as close as Kentucky would get losing 85 to 65.

The difference of the game tonight and the great performance that we saw in the Florida game was defensive intensity. The Cats showed none of that tonight allowing the Crimson Tide to make 14 three-pointers while shooting 46.7 percent from behind the arc. Kentucky had 19 turnovers and only forced 11 turnovers.

Kentucky was led by Jacob Toppin with 14 points and 6 rebounds. Alabama’s John Petty had a great 23-point performance while grabbing 5 rebounds.

Kentucky’s next game will be at Auburn on Saturday at 2pm. Let’s hope that the defense shows up that that game.

JOHN CALIPARI: Not one of our players played well. I obviously didn’t coach well. But what I told them after is I’m going to find five guys that will fight and that’s who I’ll play. We got beat every which way but loose. We were late to everything. We were backing away from players, probably because of what you said. They’re afraid, I’m going to get beat on the dribble and look bad, I’ll back away, give them a three. They shoot 30 and make 14. Give Alabama credit. They came in here and one of their players asked me, ‘What’s the score,’ at the end of the game. You know, it’s 85-65, you killed us. They came in… We start the second half and, I mean, we work out of timeouts. When you’re getting clubbed, you got no confidence. It’s like a boxer. You walk in and you start getting hit in the head three or four times, it’s hard to be confident. Now you can’t run stuff. We couldn’t get a rebound. Nineteen turnovers. You know where most of them were? The hardest play we could make, we made. How about you just throw it to that guy right beside you because I got to do something crazy because I look really bad right now, I’m going to make a hard play. We reverted. I’m not sure I’ll even watch this tape, to be honest with you. Move on to the next one. This league, it’s not going to get easier. People were playing the way they are, which is space the court and beat people on the dribble. Let me ask you, did we have anybody that could stay in front of anybody? I don’t know. I mean, didn’t look like it. We got work to do. You know what, this team has made strides so they showed what they can be, but they’ve also shown now what they can be. You come and fight and execute and do this together. How about this one? We had about four or five, maybe six or seven, wide-open shots that we threw the ball out like that for no reason. All you had to do was throw it in their pocket, the guy gets a shot. We throw it here. What that means is I am not worried about him, I’m only worried about myself. I’m not thinking about that shooter, putting it in the pocket so he can get that thing off. We didn’t get it to Olivier (Sarr). He was wide open. We showed him at halftime five clips where the guy’s got him on his back. Either we don’t throw it or he’s in a dogfight to keep the guy behind him, and we throw it away from him. Can’t go get it. He’s in a dogfight. He’s fighting, fighting. You throw the ball over there because you’re afraid you’ll throw it away. I mean, it was a mess, but…

JOHN CALIPARI: Well, we took 18 threes. How many we make?

JOHN CALIPARI: Yeah. So, if we took 25 and made six, how would that be? We had a chance to go inside and post the ball and play, now put that game to where it was nine or 10. We couldn’t deliver the ball. When we did, we scored in there, did some good stuff. Again, we had a lot of one-for-fours, one-for-fives. Dontaie (Allen) was two-for-five. Four-for-18 from the three means, yeah, maybe you’re not a 3-point shooting team, but that’s ok. On the other side of it is in the first half they made 10. They were either uncontested or we were late getting to somebody. Well, they’re going to make them then. That’s how they play. Our game plan was we are not blocking the shot, but we’re going to contest. So, we get late, not late getting to them, but late jumping. We weren’t even near people.

JOHN CALIPARI: I can’t hear everything you’re saying. But I talked about it on the radio show. Half of these kids come from military families. They have either a father or brother or uncle, a grandfather that was in the military. This had nothing to do with military. They saw all the stuff that was going on and they felt like they needed to do something. I didn’t know about it until 90 minutes before the game. We’ve had a talk since then about you don’t need to speak now, you need to have action. How do you bring people together? How do you make a difference? Not just how do you make a statement. I talked to them about what we did with the minority leadership, the McClendon, which was action, you do something, you don’t just speak. Like I said to them, they’re 18 years old, they’re learning. It was not meant… These kids are good kids. They’ve got good hearts. Again, this political time, probably not a real good time to do it. But when they came in, we really feel strongly, we want you to kneel with us. I put my hand on my heart even though I did kneel. I have friends in the military, friends in the police. This is our country right now. Anything that’s done you’re either for something, for a party or against a party. That’s not who they are. I like to think their civic duty of voting, they all did. I don’t know how many of you voted when you were 18 or 19. I didn’t. They have. Their statement was peaceful. It was a peaceful statement. Hopefully going forward we’re going to figure out and help them have some actions that are not in front of the public, that are not in front of the TV, but things they can do to bring people together or make a difference.

JOHN CALIPARI: I’m not saying that. That’s what they wanted to do. The timing of it, with all that’s going on right now, they felt the timing was right because of what they’re seeing on TV. Now they’re like, OK.

JOHN CALIPARI: Let me ask you this question. How have we been guarding the three?

JOHN CALIPARI: So, there’s a lot of things that went on today. My hope is this is a knock-off game. Alabama’s good. They deserved to do what they did to us. They made open shots. They were physical going to the basket. So, not only did they get that, they were getting plays at the rim. We were getting back on the left and right. Like I said, this may be one you burn the tape, don’t even look at it. My hope is this isn’t who they are. This is a knock-off.

JOHN CALIPARI: It was a rough day today. It was an emotional day today. We’ve got four or five that will go to the viewing tomorrow that were friends, knew they could count on Ben. Ben was one of the nicest. Ben came in with one thing, I need you to help Nick (Richards). I need you to be physical. When I went to put him in games, he begged the coaches not to put him in. Tell coach not to put me in. This kid was only here to help the team. He had a great smile and a great way about him. He was a little bit of a prankster. It’s just sad. It affected the guys. I mean, the guys that didn’t know him could see that the other five… It was an emotional morning. It was emotional for me. I didn’t know it until the morning. I just feel for his parents. I feel for his sister. I mean, it’s just a bad deal all the way around. I’m not worried about it having an effect on my team today. This is a basketball game. That family, man. I mean, I talked to Brad (Calipari). You try, doing the best you can, absolutely. Sometimes there’s things that will work against you. But I wanted Brad to know, you’ve done everything to put yourself in a position. If it doesn’t all work out, doesn’t mean you failed. You use all that stuff and put it to good use. That’s what the great game of basketball is about, what you learn about yourself, what you learn about being a team, how you sacrifice, how you give up for each other.

JOHN CALIPARI: I said after if I had to do it over again, because we wouldn’t fight in battle, I would have just put Lance in there. But, again, did you expect us to play this way? Anybody? So, now you’re giving guys a chance to play through it thinking they’ll wake up. Sometimes you look back and say, If I would have known you wouldn’t have woken up, I would have just played this guy. But that’s not how this goes. Lance has been great. Like I said, I’m looking for five fighters, battlers, that will come in and play confident. Can’t play confident if you’re getting hit in the head. Now, if you’re hitting somebody in the head, you’ll be confident. If you’re taking all the shots instead of giving shots, you’re not going to be confident. We got kind of got worked there a little bit. I mean, pushed around, shoved around. Got to fight back. But anyway, thanks, folks.