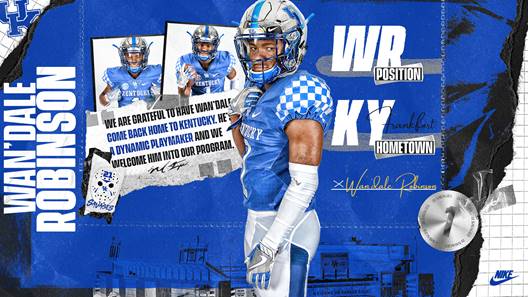 LEXINGTON, Ky. – Former Nebraska wide receiver Wan’Dale Robinson has signed to play football at the University of Kentucky, head coach Mark Stoops announced today. Currently, he will have to sit out the 2021 season due to NCAA transfer rules but could become eligible pending adoption of the NCAA transfer legislation or extension of the blanket waiver. Due to COVID-19, every student-athlete was granted an extra year of eligibility, therefore, he will have three seasons of eligibility remaining.

“We’re grateful to have Wan’Dale come back home to Kentucky,” Stoops said. “He’s a dynamic playmaker and we welcome him into our program.”

Robinson, who hails from Frankfort, Kentucky, returns to the Commonwealth after playing two seasons at Nebraska.

As a freshman in 2019, Robinson was a key member of the Husker offense, playing in 10 games and earning three starting assignments at receiver and one at running back. He caught 40 passes for 443 yards and two touchdowns while rushing for 340 yards and three scores. The 40 catches and 443 receiving yards were the most by any true freshman in Nebraska history. Overall, he ranked second on the team in receptions, receiving yards and receiving touchdowns, while ranking third in carries, rushing yards and rushing touchdowns. Robinson totaled 1,029 all-purpose yards as a true freshman, which ranked second on the team and was the third-highest total ever by a Husker true freshman.

Because of his versatility and play-making ability, he was named a second-team freshman All-American, an honorable-mention All-Big Ten selection, and was a two-time Big Ten Freshman of the Week. He was also one of four national finalists for the Paul Hornung Award, given to the nation’s most versatile player.

Robinson ranked fourth nationally among all FBS freshmen in all-purpose yards per game in 2019 with the second-highest total among Power Five freshmen. Robinson was also one of only two FBS players to total 400 receiving yards, 300 rushing yards and 200 kickoff return yards in 2019.

In 2020, he led the Huskers with 51 catches and 461 receiving yards despite playing only eight games and splitting duties at running back. He was fourth on the team with 240 rushing yards and led Nebraska with 696 all-purpose yards. He once again was on the Paul Hornung Award Watch List and he earned honorable-mention All-Big Ten honors from the conference coaches. Robinson ranked fourth in the Big Ten and 23rd nationally with 6.4 receptions per game, the fourth-highest average in the country for an underclassman.
Robinson first made a name for himself while at Western Hills High School in Frankfort, Kentucky where he was the state’s consensus top player as a senior. His career stats are staggering as he totaled 8,582 yards from scrimmage with 118 offensive touchdowns. On the ground, he gained 6,795 yards, averaging more than 11 yards per carry while scoring 97 rushing touchdowns. He was also a threat in the receiving game, catching 102 passes in his career for 1,787 yards and 21 touchdowns. Robinson totaled 781 career points, which ranks No. 2 all-time in Kentucky history.

He went on to win the Paul Hornung Award as the state’s player of the year, Kentucky’s Mr. Football and the Gatorade Kentucky Player of the Year. He also was one of five finalists for the 2019 All-American Bowl Player-of-the-Year award, which is presented annually to the nation’s most outstanding high school senior.

He was a consensus four-star recruit coming out of high school, ranked as the nation’s No. 2 all-purpose back and was the top player in Kentucky by 247Sports.

Robinson is majoring in sports media and communications with a minor in business.