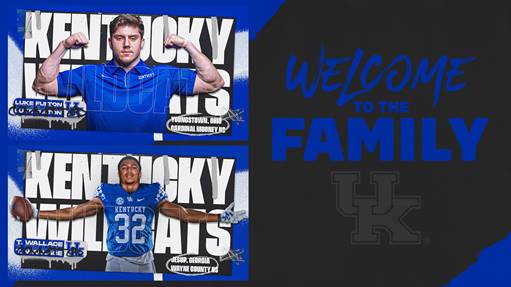 Linebackers Luke Fulton and Trevin Wallace sign with the Wildcats

LEXINGTON, Ky. – Head coach Mark Stoops is pleased to announce the addition of two talented linebackers to the 2021 signing class in Michigan State transfer Luke Fulton, and Trevin Wallace, a prep standout at Wayne County High School in Jesup, Georgia. After signing 19 in the early signing period in December, Stoops and his staff have now brought in 21 new Wildcats, which includes 18 high school prospects and three transfers.

“I’ve known Luke for a long time and watched him play for a long time,” Stoops said. “We’re grateful to add him to our program and the contributions he will bring at inside linebacker.”

Luke Fulton, Linebacker, 6-4, 230, RFr-Tr, Youngstown, Ohio (Michigan State/Cardinal Mooney) – Transfer from Michigan State … Did not play in 2020 … Redshirted his freshman season in 2019 … Named Scout Team Special Teams Player of the Week vs. Rutgers in 2019 … A four-star linebacker who came out of traditional powerhouse Cardinal Mooney High School in Youngstown, Ohio … Ranked among the best players in Ohio by 247Sports (No. 9), Rivals.com (No. 15) and ESPN.com (No. 19) … Also listed as one of the top overall prospects in the nation by 247Sports (No. 280) and one of the top overall prospects in the Midwest (No. 51) by ESPN.com … Three-year starter for head coach P.J. Fecko … Cardinals’ leading tackler as a junior and senior … Totaled 98 tackles, 16.0 TFL and three sacks in 2018 as a senior … Named to the 2018 Ohio Prep Sportswriters Association All-State Third Team in Division IV … Two-time Ohio All-Northeast Inland District First-Team selection … Named to the Butkus Award preseason watch list as one of the top 50 linebackers in the country … Landed a spot on the WKBN Big 22 list … Honorable mention all-state choice by OPSWA (Division IV) as a junior in 2017 after recording 135 tackles, including six sacks, and eight forced fumbles … An all-around athlete who also participated in basketball, basketball and track at Mooney … Excellent in the classroom as he was a member of the National Honor Society and ranked in the top 10 in his class with over a 4.00 GPA … Named the WYTV “33 Student-Athlete of the Week” on Sept. 13, 2018 … Chose UK over N.C. State and West Virginia among others.

“Trevin is as talented an inside linebacker as we have recruited here,” Stoops said. “He jumps off the tape as you watch film. He’s the type of athlete with the potential to make an immediate impact.”

Trevin Wallace, Linebacker, 6-2, 220, Fr-HS, Jesup, Georgia (Wayne County)  – A four-star prospect by all of the national recruiting analysts ….  Ranks as the nation’s 35 overall prospect and No. 2 inside linebacker by 247Sports … Rated as the state of Georgia’s No. 6 overall player … A two-way difference-maker for head coach Ken Cribb at Wayne County High School … Saw action at receiver, running back, quarterback, and multiple linebacker spots, plus had reps as a kick and punt returner during his prep career … Totaled 96 tackles, 12.0 tackles for loss, 5.0 sacks, three forced fumbles and an interception on defense as a senior … Had 78 rushes for 910 yards and seven touchdowns and 10 catches for 79 receiving yards playing on the offensive side of the ball … Had an incredible performance in his final high school game, rushing 28 times for 382 yards and three touchdowns … Also played every snap at outside linebacker in the game … Earned WCHS Varsity Offensive Player of the Week for his performance in the playoffs … Named a Sports Illustrated All-American … Played in only four games as a junior due to injury … Participates on the track team for the Yellow Jackets in the 100- and 200-meter dashes, 110m hurdles, high jump, long jump, and shot put … Chose Kentucky over Auburn, South Carolina, Ole Miss and Florida State.

The signing further bolsters a class rated in the Top 40 nationally by ESPN and 247Sports and includes eight signees who have been rated as four- or five-star players by Rivals. Prospective student-athletes originally had until April 1, 2021 to sign national letters of intent but due to COVID-19 that has been extended to August 1, 2021.

Six different states and Australia are represented in the class. Kentucky was the Wildcats’ most represented state with eight. Four apiece are from Georgia and Ohio, while two are from Alabama, one is from Michigan and one is from Tennessee. Wilson Berry is UK’s third-straight Australian punter, following Matt Panton (2017) and Max Duffy (2018-20).

Class is eligibility for the 2021 season