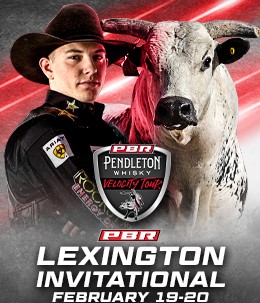 LEXINGTON, Kentucky – For the fourth time in as many years, PBR’s (Professional Bull Riders) Pendleton Whisky Velocity Tour (PWVT) will buck into Lexington, Kentucky and Rupp Arena. America’s Original Extreme Sport is set to storm into the Bluegrass State on Friday, February 19 and Saturday, February 20 with the PBR Lexington Invitational.

For two nights only, some of the best bull riders in the world will battle the sport’s rankest bovine athletes in the ultimate showdown of man vs. beast in one of the most exciting live sporting events to witness. The fearless riders of the PBR are eager to bring back to Lexington the only sport that pits a lightweight against a heavyweight in epic 8-second confrontations.

In cooperation with the office of Kentucky Governor Andy Beshear, as well as Rupp Arena, PBR has instituted a series of fan safety protocols for a safe and responsible event, including:

In 2020, Cole Melancon (Paris, Texas) and Lindomar Lino (Anapolis, Brazil) tied for the event win at the home of the University of Kentucky Wildcats. Both cowboys went a flawless 2-for-2, with Lino’s march to the victory including a championship round winning 90-point ride aboard Sledge Hammer (Golden Boys/Knapp).

In addition to both riders collecting crucial world points, each also earned a berth to compete on the elite Unleash The Beast for the Iron Cowboy Major at STAPLES Center in Los Angeles.

Capitalizing on the opportunity, Melancon parlayed his elite tour invite into yet another victory, becoming just the second rookie in the sport’s history to win a PBR Major when he was crowned the Iron Cowboy. Earning a $123,407.69 payday along with 200 world points, Melancon skyrocketed from No. 29 to No. 6 in the world.

Narrowly edged out for the Rookie of the Year honor at season’s end, Melancon concluded 2020 a career-high No. 10 in the world.

Other past event winners include 2019 PBR Lexington Invitational Champion Stormy Wing (Dalhart, Texas) and Keyshawn Whitehorse, who won the event en route to being anointed the 2018 PBR Rookie of the Year.

The PBR Lexington Invitational will mark the third PWVT event of the year, with PBR’s fastest-growing tour first scheduled to stop in Cedar Park, Texas, and Greenville, South Carolina.

The 2021 PWVT season is slated to make more than 20 stops, scheduled to make future stops in cities including Memphis, Tennessee; and Reno, Nevada, before culminating the season with the 2021 Pendleton Whisky Velocity Tour Finals in Las Vegas. Former PWVT champions include some of the top riders on the globe today, such as Chase Outlaw (2016), 2020 PBR World Champion Jose Vitor Leme (2019) and reigning champion Mason Taylor (2020).

All riders will attempt one bull each in Round 1 on Friday night and Round 2 on Saturday night. Following Round 2, the Top 10 will then advance to the championship round where they will attempt one final bull, all in an effort to be crowned the event champion. Additionally, the PBR Lexington Invitational event winner will also earn an invite to compete on the elite PBR Unleash The Beast.

For an enhanced PBR experience, fans can also purchase PBR Premium Experiences, which provide a behind-the-chutes look into the toughest sport on dirt.

Throughout the 2021 season, PBR will continue to commit to providing a safe environment for fans, athletes, employees, and crew by working with its venue partners to implement industry-leading protocols for live events while following health guidance from local and state officials.