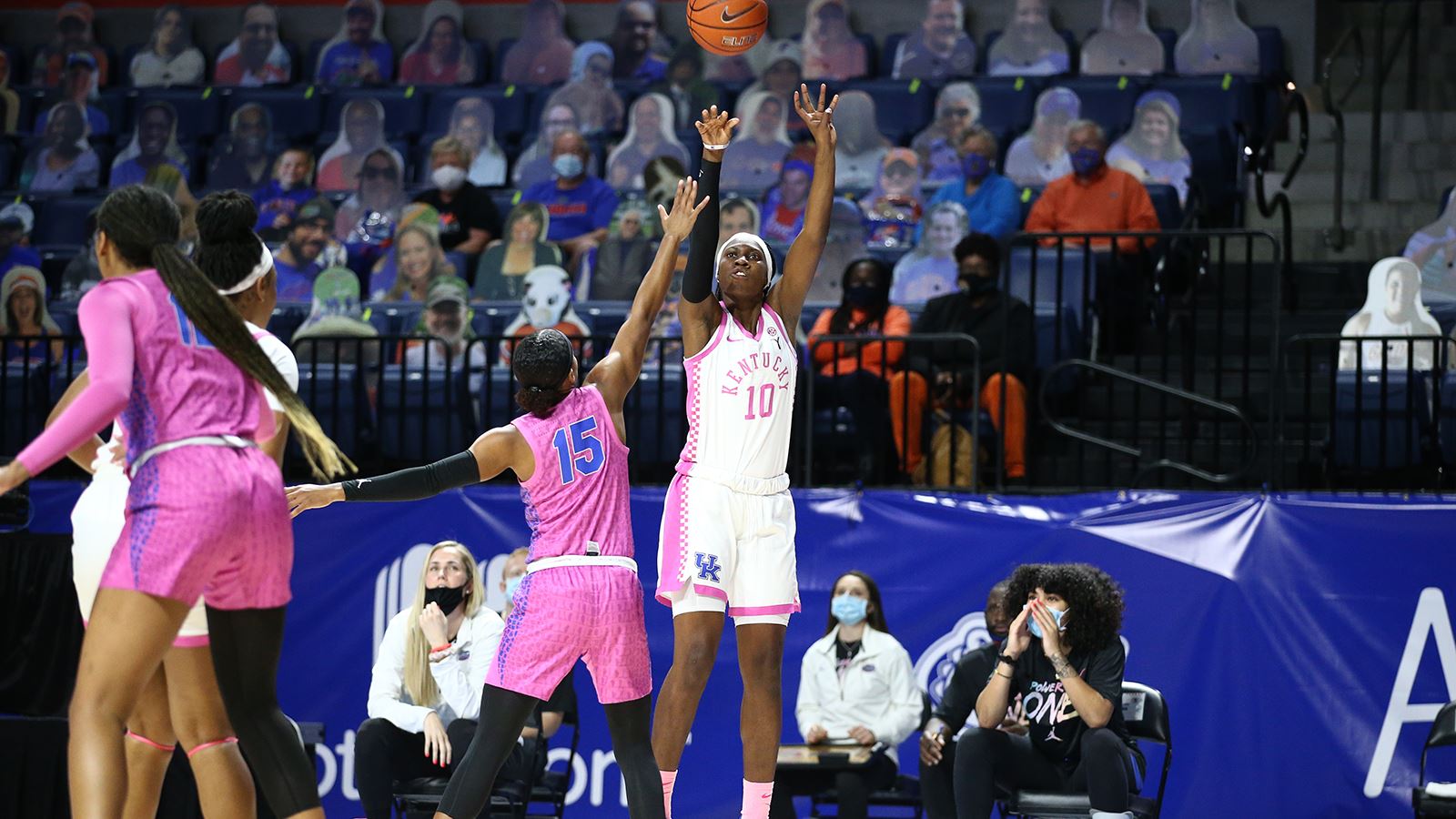 Howard Leads No. 17 Kentucky Past Florida

Howard made 12 of her 20 shots from the floor, including four of seven from behind the arc, and three of four at the free throw line. In addition to her nine rebounds, Howard added two steals, two assists and a blocked shot.

Kentucky (15-5, 8-4 SEC) got 13 points apiece from KeKe McKinney and Chasity Patterson. The Cats also got nine points and 10 assists from Jazmine Massengill.

Kentucky got the scoring underway on a three from Patterson. The Cats took a 6-0 lead when Howard hit a three from the left wing. But Florida answered by scoring the next six in a row, tying the game at 6-6. Kentucky would get a Tatyana Wyatt corner jumper and a McKinney layup to lead 10-6.

After Florida cut it to 10-9, McKinney hit a three from the top of the key to make it 13-9. But Florida would hang tough, tying the game at 13, 15, 17 and 19 before UK’s Massengill converted a layup with 10 seconds left in the quarter to give the Cats a 21-19 advantage after one period of play.

Early in the second period, Florida’s Danielle Rainey hit consecutive threes to give Florida a 25-21 advantage. After UK got a Patterson jumper to cut the deficit to 25-23, the Gators scored four in a row to take a 29-23 advantage and force at UK timeout.

Kentucky would continue to chip away at the lead throughout the period but it took a big run late in the half for the Cats to take the lead back. Trailing 42-37 with 2:50 left in the half, Kentucky got a jumper from Massengill, then a jumper from Howard and a basket from Blair Green, the latter giving UK a 43-42 advantage with 1:36 left in the half. Kentucky would get another Howard jumper and a Howard layup to close the half on a 10-0 run that gave the Cats a 47-42 lead at the break. Howard closed the first half with 12 points and six assists.

Florida got a Kiara Smith free throw to start the second half scoring. However, Kentucky would get a three from Howard, a jumper from McKinney and a Howard layup to score seven in a row and to grab a 54-43 lead with 7:47 left in the third. Florida would get a Nina Rickards layup to cut the UK lead to nine, but the Cats responded with a 9-3 run to lead 63-48 with 5:18 to play.

Howard had an amazing third period, scoring 13 of UK’s first 19 points in the period as the Cats built a double-digit lead. However, Florida would close the third period on a 7-2 run to cut the UK lead to 70-59 with one quarter to play.

Florida continued to chip away at the UK lead early in the fourth period. After a Howard free throw gave Kentucky a 71-59 lead, Florida scored eight in a row, cutting the lead to four with 7:48 to play. The Gators would eventually get within three, 73-70 but Florida could get no closer.

Kentucky would put the game away with a 9-0 run late in the fourth period. Howard scored five of UK’s nine points in the run as the Cats put the game out of reach.

Kentucky returns to action on Thursday, hosting LSU at Memorial Coliseum. Tipoff is set for 7 p.m. ET and the game can be seen on SEC Network Plus.