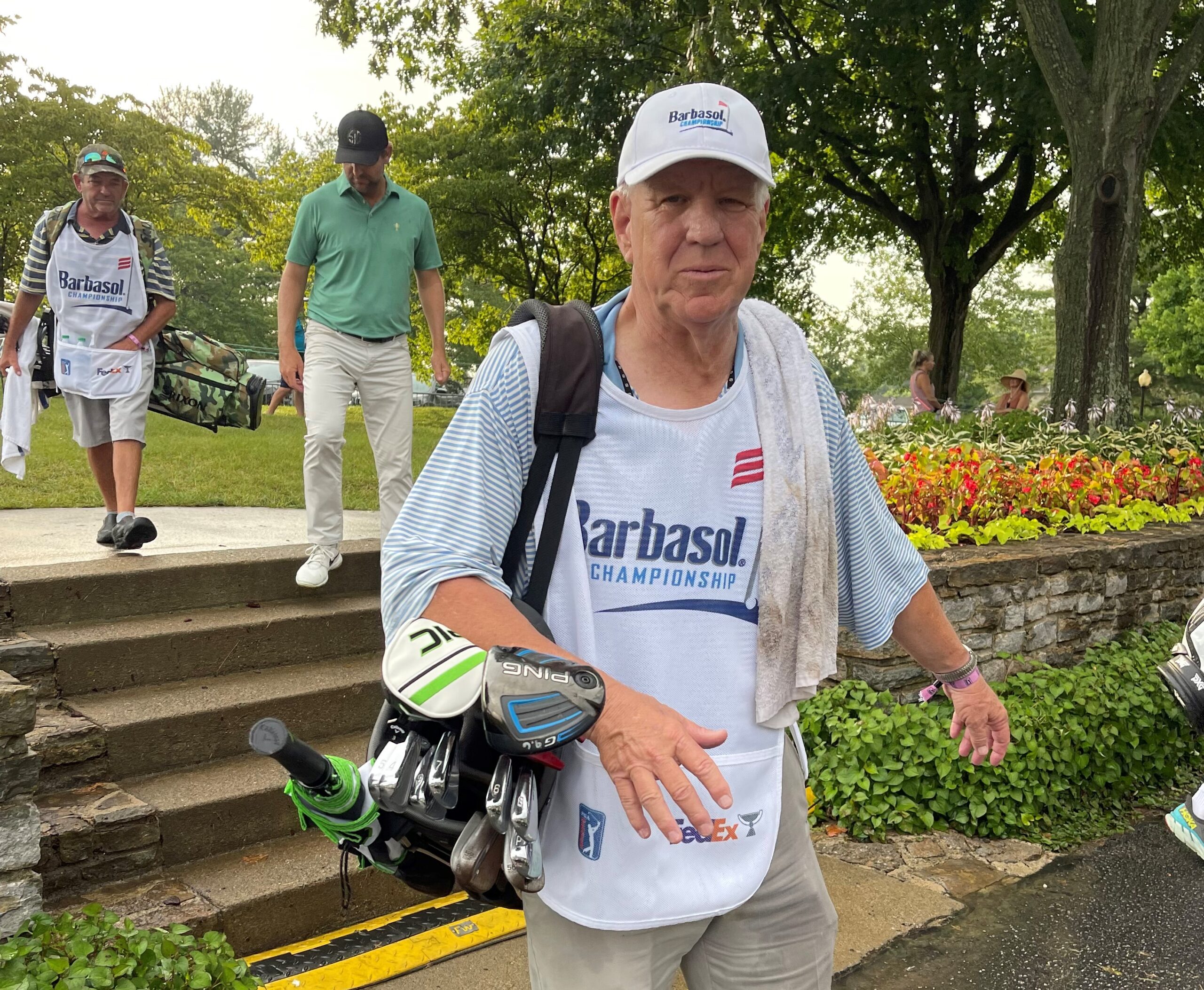 (NICHOLASVILLE, Ky.) – For Randy Maynard, the call came with minimal notice. Only hours before the start of the Barbasol Championship on Thursday, the Lexington pastor was plucked from his mundane role as the volunteer chairperson of player dining and thrust into the high-stakes world of a PGA caddie.

It turns out that a last-minute withdrawal had allowed PGA Tour Pro Will MacKenzie to sneak into the 132-player field. MacKenzie, from Ft. Jupiter, Florida, desperately needed someone to carry his clubs. Having spent the entire prior week in the Barbasol “bubble” robotically stocking food and beverages as part of his volunteer duties, Maynard jumped at the chance to get back in the game. The 67-year-old preacher felt like he had been rescued from purgatory.

“I was thinking this was second only to being baptized and being married,” he quipped. “It was like Christmas had come on July 15.”

On the surface, the pairing of MacKenzie and Maynard was quite serendipitous. MacKenzie was born in Greenville, North Carolina. Maynard pastored a church there from 1992 – 2001, so the two had several mutual acquaintances. In addition, the cumulative 113 years of age between a 46-year-old golf pro with his 67-year-old caddie had to set some sort of PGA record, right?

“I told Will it was a God thing,” Maynard said about the pairing. “‘You grew up in Greenville, I was in Greenville. This was God ordained.’ Then I got to thinking it was Satan ordained. Or maybe God just has a sense of humor.”

Although Maynard had plenty of previous caddie experience, he hadn’t carried a bag in quite a while—37 years to be exact. The last time he caddied was in 1984 working for his friend Bobby Mitchell at the PGA Championship at Shoal Creek in Birmingham, Alabama. Mitchell had some good success on the Tour, winning the 1971 Cleveland Open and finishing 2nd to Jack Nicklaus in the 1972 Masters. He would later go on to defeat Nicklaus in a playoff in the 1972 Tournament of Champions.

This would be no tournament of champions, however, for MacKenzie and Maynard. After carding a 2-over score in round one on Thursday, the pair was 5-over when they abruptly withdrew after completing only nine holes on Friday.

Although the entire experience was over the top for Maynard, he was extremely disappointed in the way he performed.

“I was rusty, rusty, rusty,” he openly admitted. “I almost committed the unpardonable sin—Will caught me—of putting a bag down on the green. That’s unpardonable. I mean everybody knows that. Then during the rain delay, I stepped on the tee marking Lee Hodges’ ball. Will got a little upset with that.”

Having walked the course as a spectator, I can’t imagine how grueling it would be to be carrying around a 40-pound weight for four straight hours under the brutal afternoon sun. Throw in the pressure of top-flight competition after a three-decade drought, and I would have wilted like Jordan Spieth at the 2016 Masters. Maynard, however, was undeterred.

“I know Will was hoping for a caddie who could help him with his clubs,” Maynard lamented. “I was fortunate just to keep up with him. He walks fast and I ran quite a bit. But I still had a lot of energy. I’ve been working out on the treadmill all year, and that helped immensely. I was just disappointed that he withdrew. I understand. He was not playing well, and I was not caddying well. He was used to a better caddie.”

There are only three rules to being a good caddie: show up, shut up, and keep up. Based on those standards, there’s no doubt that Maynard performed admirably.

The entire Caddie experience at the Barbasol Championship has been greatly upgraded this year. Every single participant has commented on the outstanding food, the additional swag bags, the luxurious clubhouse accommodations, and not having to deal with flies in the garage like years past. The miniature golf putting contest on Tuesday night (organized by Maynard) was a big hit.

During the competition—which boasted a $600 total purse—2019 Barbasol winner Jim Herman stopped in to offer the caddies some inspiration and encouragement. Besides offering a few putting tips, the always generous and magnanimously spirited Herman also sweetened the pot with an additional three-hundred dollar tip out of his own pocket.

Such is life for caddies on the PGA Tour. After such an action-packed week, is Pastor Maynard looking for a full-time gig perhaps?

“It’s one of the most exciting things I would like to do,” Maynard admitted. “But after the word gets around [about how bad I am], I’m not sure who would want to ask me.”

Dr. John Huang is a retired orthodontist and military veteran. He covers University of Kentucky and professional sports for Nolan Group Media, Sports View America, and JustTheCats.com. His book “Cut To The Chase” is now available on amazon. His newest release, “Kentucky Passion—Wildcat Wisdom and Inspiration,” is scheduled for October (IU Press).