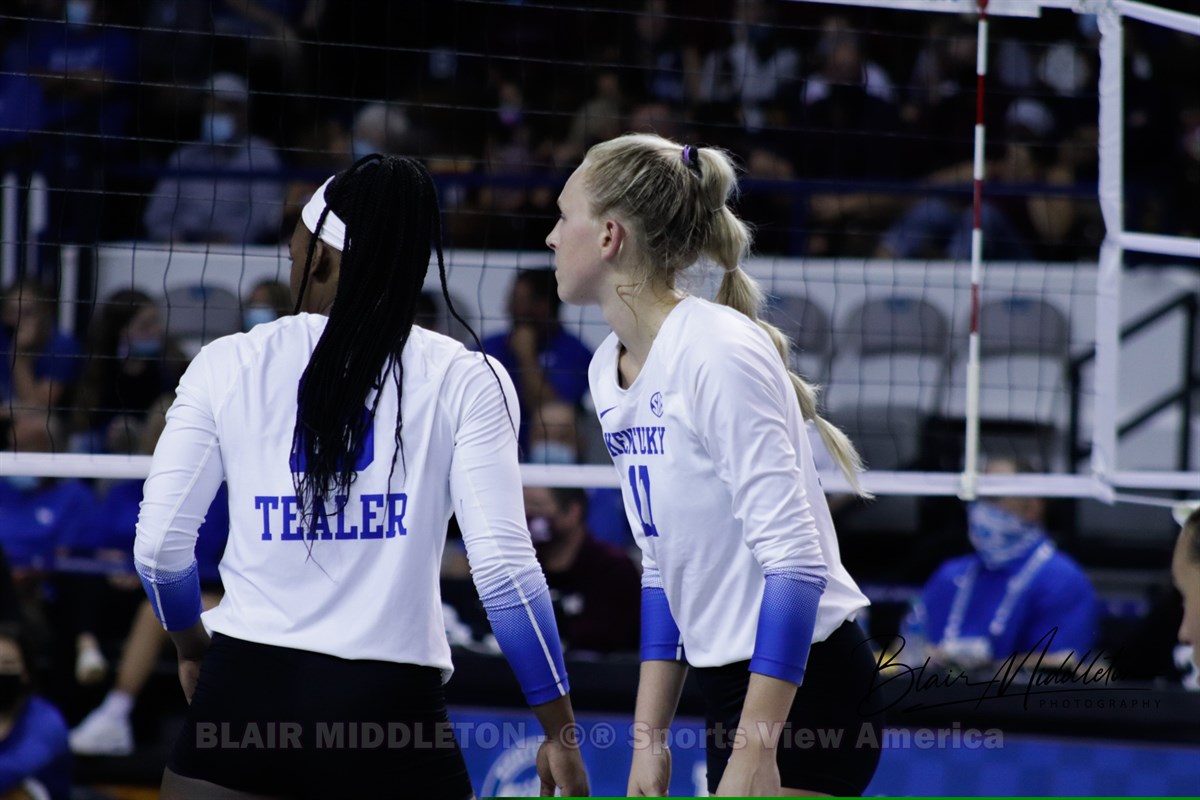 Tealer was one of three Kentucky players in double figures scoring, joining Madi Skinner who had 15 kills and Alli Stumler who had 14 kills in Wednesday’s match. The Wildcats hit .204 as a team in the match, but the defense told the story, holding Mississippi State to .134 hitting in the match and holding the Bulldogs to under .100 in two of the four sets.

With the win, Kentucky remains the only unbeaten Southeastern Conference team left in the league with a 3-0 conference record. UK is now 10-3 on the season and has won a season-high tying four matches in a row.

UK will next face a road test Saturday afternoon in Tuscaloosa, Alabama as the No. 5 Wildcats take on the Alabama Crimson Tide at 2 p.m. ET. The match will be broadcasted on the SEC Network+, ESPN3 and the ESPN app.

Freshman setter Emma Grome recorded her sixth match in a row with 40 or more assists, as the Loveland, Ohio native went for 48 assists and a new career-high five blocks. Defensively, it was four different players with 10+ digs that carried the night paced by Eleanor Beavin’s career-high 20. Lauren Tharp, a senior from Louisville, Kentucky had 10 alongg with Stumler and Skinner both recording 12.

Kentucky came out strong with two quick points and a thunderous kill from Azhani Tealer. Mississippi State fought back with some quick points of its own, but Kentucky persisted and held them off.  Alli Stumler hammered down a huge kill to bring the Kentucky lead back to two at 10-8. A dominating block by Tealer and Emma Grome made Memorial Collesium erupt to make it 15-13, Kentucky. Tealer and Stumler continued to pound Mississippi State with kills from everywhere on the court as Kentucky increased their lead to three at 19-16. Mississippi State fought back and closed the gap to two but another kill from Stumler kept Kentucky in the lead. MSU couldn’t seem to find a stop for Stumler as she continued to dominate from the outside. An ace from Tealer led Mississippi State to take their first timeout at 19-16. Out of the timeout Tealer’s strong serve pushed Kentucky to 20 as the lead ballooned to 20-16, UK’s largest of the set. MSU followed up with their own strong serves and forced Kentucky into calling a timeout at 20-19. The Bulldogs went on a last-minute run, and Kentucky called another timeout trailing 23-20. Mississippi State’s nine-point run ended with a kill from Bella Bell. Both teams fought hard as the last point was won on a long volley ending the set at 25-21 MSU.

Mississippi State came out strong in set two but Stumler was able to quickly put out the fire, followed by a monster block by Tealer keeping the game close. MSU successfully won a challenge to gain the lead at 4-3.  Mississippi State took that lead and turned it into quick points on a 5-2 run ended by two Madi Skinner kills.  MSU continued to march on keeping a steady four-point lead.  Reagan Rutherford had an incredible block followed by a powerful kill to get Kentucky back within one point at 10-9. Stumler and Rutherford continued to assert their dominance at the net keeping Kentucky within one in the middle stanza of the set. Skinner forced down a powerful kill to tie the set at 14 and continue a five-point streak for Kentucky which made MSU take a timeout at 17-14 Kentucky.  Skinner hammered it down twice to keep the Kentucky streak alive and extend UK’s lead to 20-18. MSU continued to fight but a correct challenge pushed Kentucky up by two.  Bell hammered down her second kill of the match to secure a Kentucky lead but MSU pushed back and pulled to within one at 21-20.  A needed forceful block by Rutherford and Tealer moved Kentucky to 23-21 and Kentucky finished the set with a huge kill by Stumler, winning 25-21.

Set three started out with a huge kill from Rutherford as she pounded a freeball to the floor.  Rutherford and Tealer combined for a huge block which continued Kentucky’s lead followed by a huge kill from Tealer.  Those two went back-to-back as they combined for another massive block. This 6-0 Kentucky run forced MSU into an early timeout as the Wildcats had won 13 points in a row dating back to the second set after they took a 9-0 lead in the third set. Rutherford continued to kill it from the right side, and Stumler from the left continuing the Kentucky streak to 10 unanswered points.  MSU fought back with five unanswered points of its own which forced Kentucky to call a timeout at 10-5. Out of the timeout, Rutherford ended the steak with a powerful kill from the outside. Tealer was able to hammer down a kill and have back-to-back massive blocks as part of a five-point Kentucky run which forced MSU into a timeout at 15-5.  Out of the timeout Tealer kept that energy as she forced down another kill. Stumler was able to get it done from the back row extending Kentucky’s lead to 19-7. MSU fought back for six quick points but Bell ended the streak with a huge kill out of the middle.  Rutherford and Stumler had back-to-back kills that pushed Kentucky to set point. The set was finished by a swift kill from Skinner out of the back row as Kentucky took it, 25-15.

Set four opened with quick points from both teams back-to-back. Mississippi State began a four-point run, ended by a Skinner and Tealer block. Skinner drilled a ball home with a massive kill, and after another rally, Kentucky tied the game at seven all. Another huge Skinner kill led to a Bulldog timeout at 17-14 with UK in front. Bell added another kill and kept Kentucky in the lead at 10-9. Two aces from Grome increased the Kentucky lead and a giant kill from Rutherford emphasized it. Quick plays by MSU tied the game but Stumler was able to give the lead back to Kentucky. The game remained close as both teams fought for the lead but a huge Grome and Tealer block kept the points going Kentucky’s way.  Stumler was able to end a quick Mississippi State streak with a huge kill. Tealer got another huge block which gave her nine, that tied her career high for blocks in one match and picked up her career-high breaking tenth to make it 21-18 Kentucky. A successful Kentucky challenge gave Kentucky the point on a net violation at 23-19. A three-point MSU streak forced a Kentucky timeout at 23-21 as the Bulldogs climbed to within a pair. Out of the stoppage, a Miss. St. service error gave Kentucky match point and Stumler finished the set with a kill 25-22 to close out the match.