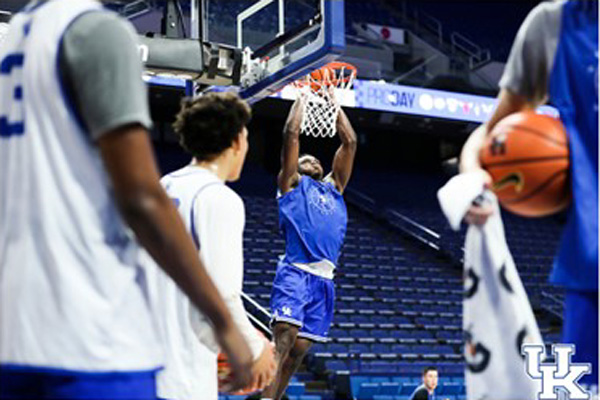 Fans across Big Blue Nation had to be worried as UK traveled to #5 Kansas. The question on most fans minds was simple, which UK team would show up for this game. Fans remember the season opening loss to DUKE at the Champions Classic in New York. A loss to a top team to start the season was not enough to worry about for these experienced Cats.

Fast forward to December 11th when UK traveled to Notre Dame and laid an egg falling to the Fighting Irish in a game UK clearly should have won. Kentucky would travel to Las Vegas the following week to take on North Carolina in the CBS Classic. UK would dismantle the TarHeels, 98-69. It would be the first of 4 straight blowout wins for the Wildcats.

Then the other UK team showed up in a trip to #21 LSU where UK would drop a very winnable game 65-60. UK would follow that up with 4 straight wins that included a near perfect win and dismantling of the #22 Tennessee Vols winning 107-79.

Of course Kentucky, as they had done all season, the Cats would fall on the road to #2 Auburn. This after looking like the Wildcats were on a path for a tremendous upset. This is why you play both halves of a game as Kentucky would fall at Auburn.

This set up the road contest at Kansas. Fans hoping the team that looked like a title contender would show up or would it be the team that lost to Duke, Notre Dame, LSU & Auburn.

It didn’t take long for that question to be answered as Kentucky would dominate the Jayhawks all night long. Keion Brooks Jr.’s 27 points led the Cats and super transfer Oscar nearly had an “average” night by his standards, as his 17 points and 14 rebounds were very close to his season averages of 16.3 points and 15.2 rebounds.

Kentucky looked every bit the team that looks to be a title contender. There is still a good portion of the season to go, but if this UK team shows up every night, Kentucky will easily be considered one of the favorites for another r National title.

Brooks scored 15 of Kentucky’s 29 points in the second half and Tshiebwe’s nine rebounds in the final stanza helped keep the homestanders at bay.