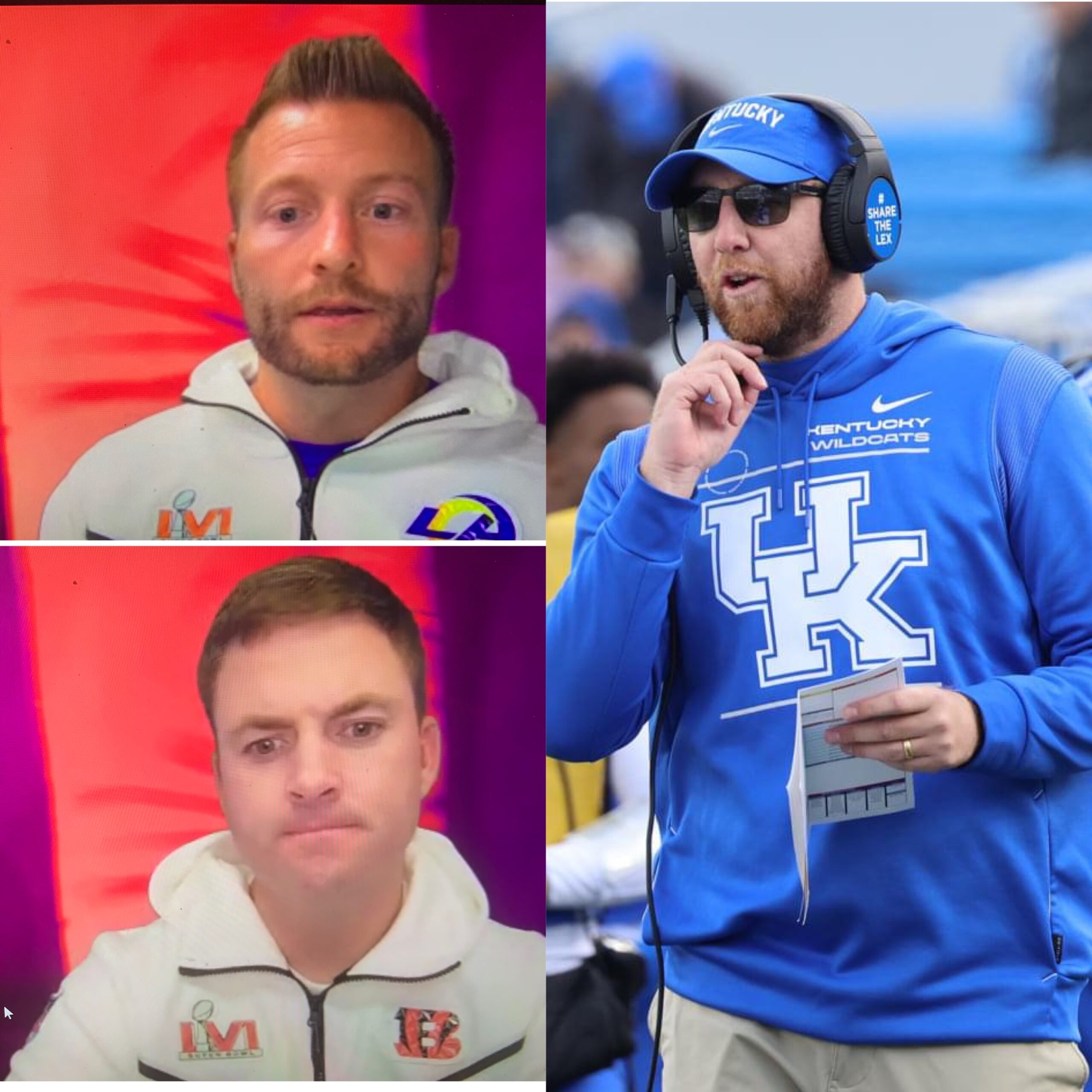 (LEXINGTON, Ky.) – If they say the apple doesn’t fall too far from the coaching tree, then Liam Coen surely remains closely tied to two football coaches who helped spring his career to life. Coincidentally, those two coaches just also happen to be facing off against each other as NFL head coaches in Super Bowl LVI.

The Bengals’ Zac Taylor served as the quarterbacks coach under Rams head coach Sean McVay in 2018. Coen, currently Kentucky’s wunderkind offensive coordinator, also served under McVay as the Rams’ assistant wide receivers coach during that same period. He then went on to become the Rams’ assistant quarterback coach prior to Mark Stoops hiring him on at Kentucky.

“I don’t really look at it as a coaching tree as it is coworkers that I worked together [with] that have gone on to really establish themselves and be really successful,” McVay said in an interview kicking off Super Bowl week on Monday afternoon. “These guys were big parts—they were great leaders for our football team. I think we [all] positively poured into one another.”

The culture established by McVay in Los Angeles has been well documented. The energy levels, the positivity, the work ethic, the strategy initiatives, and the communication channels all coalescing into a winning formula at multiple future levels.

“All those guys were people that I learned from as well,” McVay emphasized. “I just happened to be in the head coaching role, but these guys were instrumental parts of our success with the Rams. They’ve gone on to do great things. They’re coworkers. We’ve worked together positively [and] poured into one another. I’m too young to be having a coaching tree.”

Technically, he’s probably right. McVay was the youngest coach in modern NFL history when the Rams hired him in 2017 at the age of 30. Now at age 36, McVay is the same age as Coen. Taylor—the old man of the trio at age 38—spewed superlatives when I asked him about his former colleagues.

“I think the world of Liam,” Taylor said during the Bengals’ portion of the 45-minute interview session with reporters. “I think he’s a tremendous football coach. Kentucky is really lucky to have him. I came across Liam—I didn’t know him—while I was at the University of Cincinnati. We were playing, I believe, Connecticut. I was watching some early tape of Connecticut and they were playing Maine. I remember thinking, ‘Maine’s offense is really good. Who runs this show?’ I looked it up and Liam Coen was the offensive coordinator. I’ve followed his career ever since.”

After Taylor was promoted to quarterbacks coach, the Rams were in the process of interviewing some highly qualified candidates to replace him. Someone on the coaching staff recommended Liam Coen.

“I told them that I had never met the guy,” Taylor explained. “But I knew that his film proved that he belonged in the league. And so, he interviewed, he knocked it out of the park, we hired him, and he was a great addition to that staff. I know that he and Sean got really close as well.”

Hopefully not too close, as Coen has recently been rumored to be a possible candidate for the vacant offensive coordinator position under McVay.

“So, Kentucky is lucky to have him,” Taylor reiterated, as if preparing Wildcat fans for the inevitable. “He’s done a great job. He’s going to be a head coach in one of these leagues soon enough—college or pro. That’s how much I think of his football IQ and his work ethic and his relationship with his players. So, I really think the world of Liam. No surprise, I watched every game they played this year whenever I could—just to see the cool things he was doing.”

That’s pretty high praise from an NFL Super Bowl coach. But Taylor wasn’t finished gushing about the Wildcats just yet. He also revealed that he had a special connection with defensive coordinator Brad White.

“Brad White was my host on my Wake Forest trip when I signed with Wake Forest,” Taylor clarified. “So, Brad got me to Wake Forest. We played on the same team there for two years. It’s awesome to see him as well. I think it’s two of Rhode Island’s finest—Brad White and Liam Coen—leading the charge over there at UK.”

It’s awesome to see BBN getting some well-deserved publicity on the big Super Bowl stage. Now let’s just hope that Liam Coen’s tenure here at Kentucky isn’t one-and-done. Regardless of the length of his stay or wherever he ends up, we all now know the guy has more than enough pedigree for a future championship run.