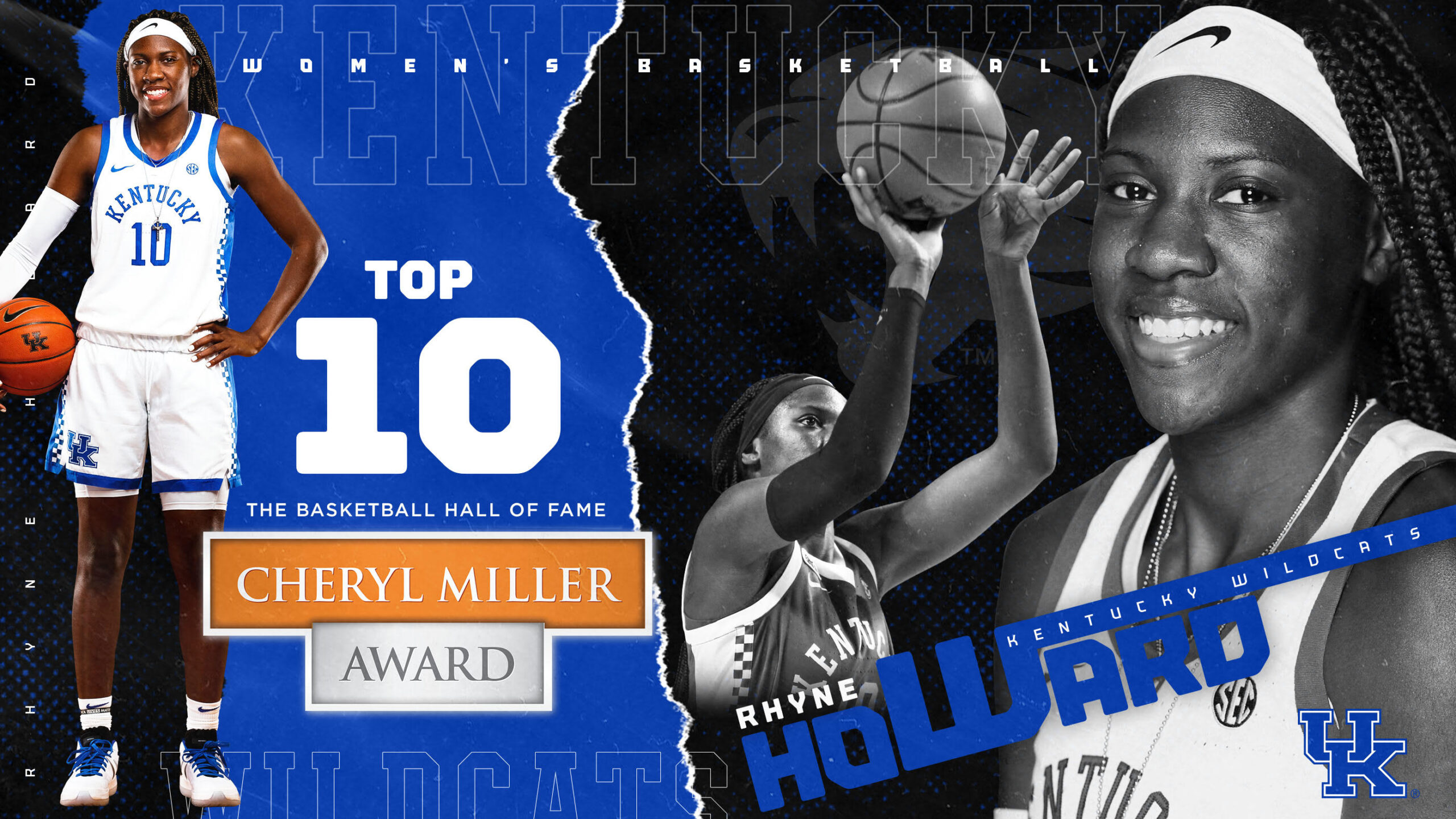 Senior guard is having an amazing year averaging 20.4 points per game with 7.6 rebounds per game

LEXINGTON, Ky. – Another day, another national watch list for University of Kentucky women’s basketball senior guard Rhyne Howard, who has been tabbed to the Cheryl Miller Award Top-10 Watch List.

Named after the three-time Naismith Player of the Year and Class of 1995 Hall of Famer, the annual award in its fifth year recognizes the top small forwards in women’s NCAA Division I college basketball. A national committee of top college basketball personnel determined the watch list of 20 candidates in November, which has now been narrowed to 10.

College basketball fans are encouraged to participate in Fan Voting presented by Dell Technologies in each of the three rounds. In late February, the watch list of 10 players for the 2022 Cheryl Miller Small Forward of the Year Award will be narrowed to five. In March those finalists will be presented to Ms. Miller and the Hall of Fame’s selection committee where a winner will be selected.

The winner of the 2022 Cheryl Miller Award will be presented on a to be determined date, along with the other four members of the Women’s Starting Five. Additional awards being presented include the Nancy Lieberman Point Guard Award, the Ann Meyers Drysdale Shooting Guard Award, the Katrina McClain Power Forward Award and the Lisa Leslie Center Award, in addition to the Men’s Starting Five.

Her best game this season came against top-15 ranked Georgia, scoring 30 points in the game, including 22 in the second half. She scored 17 points in the fourth quarter. On top of scoring UK’s last 10 points in the game, she scored 13 of UK’s last 17 points overall. She also shined against West Virginia, when she scored 27 points, going 5-of-7 from long range with six rebounds, four assists and three steals. Against Winthrop, Howard joined an exclusive club by becoming the third player in UK history to record a triple-double in a game. She scored 22 points against the Eagles with 10 rebounds and 10 assists, adding five steals.

Howard has been playing at another level the last few games with 20+ points in five of the last seven games. She has recorded a double-double in five of the last six games for UK, including a season-best 12 rebounds at No. 12 LSU. Against Auburn, she scored 29 points with nine rebounds, hitting five 3s. The guard scored 17 points in the fourth quarter against Auburn to help propel UK to the victory.

For her career, Howard has scored 2,042 career points sitting second in UK history in points scored. Against Vanderbilt, Howard scored her 2,000 career points, becoming just the third Wildcat in school history – both men’s and women’s – to record 2,000 or more points in 100 games or less. She joined Hall of Famers Dan Issel and Valerie Still in that category. Howard ranks second in school history in career scoring average at 20.0, while she is fourth in field-goals made with 711, third in career 3s made with 249 and fourth in career 3-point field-goal percentage at 37.2. She is also fourth in UK history in steals per game at 2.38.2.

Howard’s junior season was one for the record books at Kentucky, earning first-team All-America honors from the Associated Press, Women’s Basketball Coaches Association, United States Basketball Writers Association and Wooden Award. She was one of four finalists for the WBCA Wade Trophy, one of five finalists for the John R. Wooden Award, one of four finalists for the 2021 Naismith Trophy and a finalist for the 2021 Cheryl Miller Award. For the second year in a row, Southeastern Conference coaches named Howard the SEC Player of the Year, while she earned All-SEC First Team honors for the third straight season.

The native of Cleveland, Tennessee, played 24 games last season with nearly half of those coming against top-25 ranked opponents. In those games, Howard showed she is the best player in the country with impressive numbers. In 11 games against ranked opponents, Howard averaged 22.3 points per game, hitting 47.1 percent from the field and 39.7 percent from 3 with 6.7 rebounds per game and 3.0 assists per game. Howard had four 30+ scoring games during the season with three coming against top-25 ranked teams.

One of her best performances of the year was when she scored 33 points at No. 12 Mississippi State, hitting four 3s with 10 rebounds and six assists. She scored 25 points in the fourth quarter and overtime against the Bulldogs, scoring 25 of UK’s last 31 points, including 10 of 14 in overtime. Other impressive performances on the biggest stage include 32 points with seven rebounds, three assists and two steals against No. 5 South Carolina and 24 points with four 3s, 10 rebounds and four assists against No. 10 Arkansas. She also posted 22 points against No. 13 Indiana and at No. 8 Texas A&M. Howard took over for Kentucky at No. 17 Georgia with 27 points, four rebounds, four steals, two assists and went 4-of-4 from 3 and then followed with a 33-point performance against the Bulldogs in the SEC Tournament.