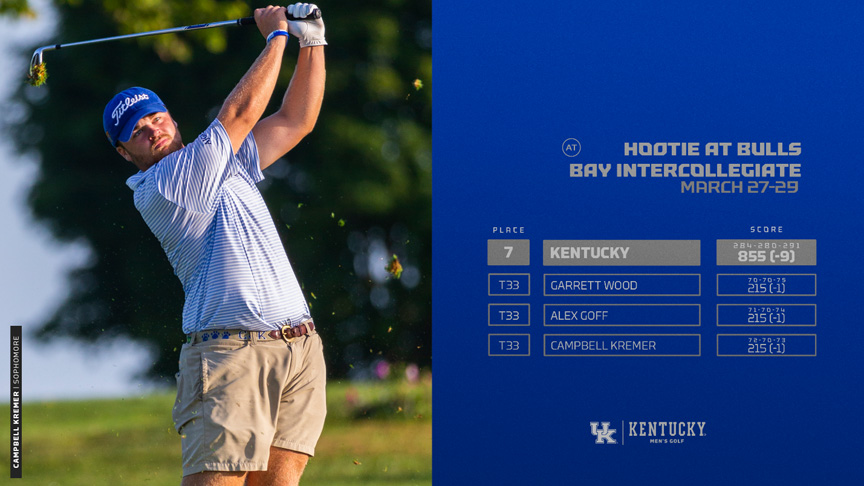 AWENDAW, S.C. – Windy conditions prevented the Kentucky men’s golf team from making a jump during the final round of the Hootie at Bulls Bay Intercollegiate on Tuesday. The Wildcats capped the tournament in seventh overall with a combined 9-under scorecard with four starters posting par-or-better finishes, but it was not enough for the Cats to ever threaten the leaders.

“A little bit of a disappointing week for us here at the Hootie,” UK head coach Brian Craig said. “We just did not get hot in any of the rounds and played the back nine today poorly in the windy conditions. I was proud of Hugo Archer. Hugo played the last 36 holes very well and is rapidly gaining in confidence and that is great to see.”

Four teams tied for the team lead at 20-under par. East Tennessee State, NC State, Missouri and South Carolina all capped the three-day, 54-hole event deadlocked. Ole Miss was a mere shot behind with a 19-under scorecard for fifth.

Archer’s steady play over the final two rounds in addition to even par or lower scorecards from Garrett Wood, Campbell Kremer, Jacob Cook and Alex Goff gave the Wildcats an opportunity this week, but the Cats just never could gain momentum.

Wood, Kremer and Goff all tied for 33rd overall and were 1-under for the tournament. Cook placed in a tie for 40th at even par and Archer tied for 57th behind a 3-over score. He played 1-under over the final two rounds.

Cook paced the Cats during Tuesday’s final round with a 1-under 71. It was the second of three rounds this week he came in under par. The Frankfort, Kentucky, native got off to a good start with three birdies over his opening eight holes.

Kremer and Archer both turned in 1-over scorecards on Tuesday. Kremer faced a 2-over deficit through 12 holes but was able to pick up some momentum with birdies at the 14th and 16th to combat a bogey at the 15th. Archer had the lowest hole of any UK player in the tournament with an eagle at the par-five fourth. He finished the day with a birdie on the 18th to offset four bogeys in between.

Goff had a round of 74 during the final round, while Wood shot a 75.

Zach Norris, playing as an individual, had a round of 76 and tied for 85th overall. Norris matched Archer with an eagle at the fourth to highlight his round.

The Wildcats amassed 50 birdies or better this week and encourage fans, friends and family of the program to donate to the Any Given Tuesday’s GoFund me for the victims of the horrific tragedy involving the University of the Southwest golf program.