Skip to content
You are here
HOME PAGE / 01 FEATURED / Dirt Track Racing – RICO BACK ON TOP AT ELDORA! 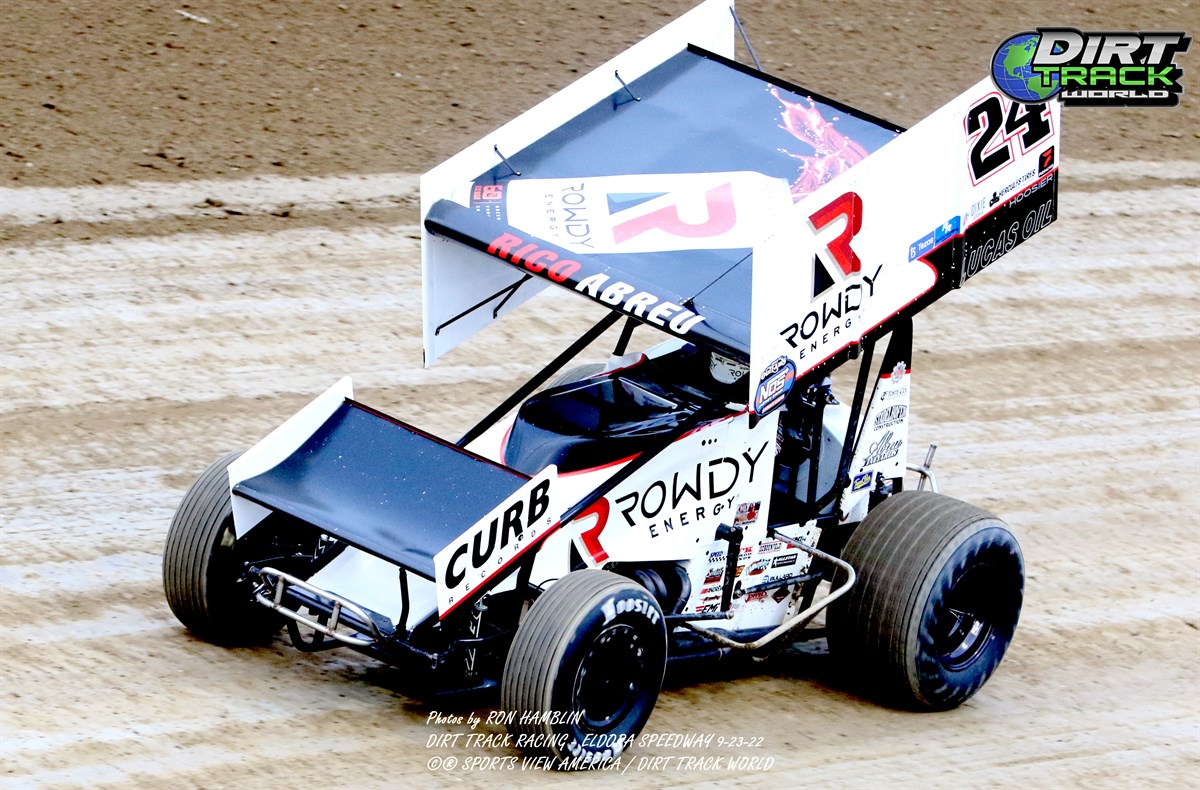 Stop the count. The drought is over. Rico Abreu is once again a winner with the World of Outlaws NOS Energy Drink Sprint Car Series.

The Rowdy Energy, Lucas Oil Products #24 led the final 24 laps of Friday’s “BeFour The Crowns Showdown” at Eldora Speedway, earning his ninth career win with The Greatest Show on Dirt and snapping a four-year winless streak with the Series in the process.

Bound and determined to overcome the agony of 105 consecutive losses, the St. Helena, CA native fended off a fury of four different challengers including Spencer Bayston, Brad Sweet, Donny Schatz, and James McFadden throughout the 30-lap affair. After sliding by Bayston on Lap 6, the 30-year-old fan favorite never relinquished the lead but could feel the full-time Outlaws breathing down his neck the whole time.

Friday’s win not only brought Rico back to NOS Energy Drink Victory Lane for the first time since September 8, 2018, but it also marked his first World of Outlaws win since the off-season addition of eventual Hall of Fame Crew Chief, Ricky Warner.

“This is a huge confidence booster,” a relieved Rico told a joyous Eldora crowd. “As race car drivers, you become so hard on yourself through these slumps inconsistencies. We built another new team this year and I’m just so thankful to have Ricky Warner in my corner. He makes any driver look outstanding. The chemistry in our team is showing, it’s just awesome to be with such a great group.”

Abreu is now a four-time winner of Eldora’s #4Crown Nationals, adding a World of Outlaws win with an All Stars triumph and pair of USAC National Midget victories. More than anything, it’s momentum ahead of the 40th Kings Royal coming soon in July 2023.
“Standing up here against the World of Outlaws is what it’s all about,” Abreu added. “Everything we do here is learning, practicing, and collecting data for when the Crown Jewel races come back in the summer. I never, ever thought in a million years that I would win a race on the bottom at Eldora Speedway, but that shows how comfortable my car is right now. These guys made some last-minute adjustments before we pushed off, and they nailed it.”

Falling short by 1.051-seconds at the checkered flag, McFadden collected his fourth runner-up result of the year and 10th podium finish since joining Roth Motorsports. Although the Australian is starving for that first win of 2022, he was relatively amped with the chance to beat the boards one more time at one of his favorite tracks on the schedule.

“I was pounding the top so hard right there,” J-Mac said with a big grin. “That’s why I come to Eldora, it’s such a blast. I actually got through to the front on the bottom, but the top was coming in during that last run so I just started hitting it harder and harder. I’m happy with a second-place tonight because I know it’ll come to us if we keep putting ourselves in a position to win.”

Rounding out the podium after briefly challenging for the lead on the final restart was Donny Schatz aboard the Tony Stewart/Curb-Agajanian Racing, Ford Performance, Carquest Auto Parts #15. The #10-time Series champion is now only six-points behind Sheldon Haudenschild in the battle for fourth-place in the championship.

“We just needed to better at the end, and that’s a recurring problem for us,” Schatz said. “We could kind of hang for three-to-five laps, but then I would just stall out. All I could do at that point was run the win back, keep the tires under it, and hang on. Rico didn’t make any mistakes tonight, so hats off to him. We’ll keep plugging away.”

Abreu’s now-snapped winless streak of both four years, 15 days, and 105 races was the longest of his World of Outlaws career – even longer than the time from his debut in 2011 to his first-career win in 2014.

James McFadden’s runner-up result puts him into a rare category with Jac Haudenschild, Bobby Allen, Tim Shaffer, Mark Kinser, Johnny Herrera, and Daryn Pittman as the seventh man in World of Outlaws history to record 10 podium finishes without any wins during a single season. He’ll have 10 races remaining to try and change that statistic.

After earning his first KSE Hard Charger Award of 2022 last week (22nd-to-2nd at Hanford), Jacob Allen did it again – this time driving from 21st-to-6th at Eldora in the Shark Racing #1A.

After a vicious head-on crash to the inside wall down the frontstretch, Brock Zearfoss was checked and released from the infield care center at Eldora Speedway.