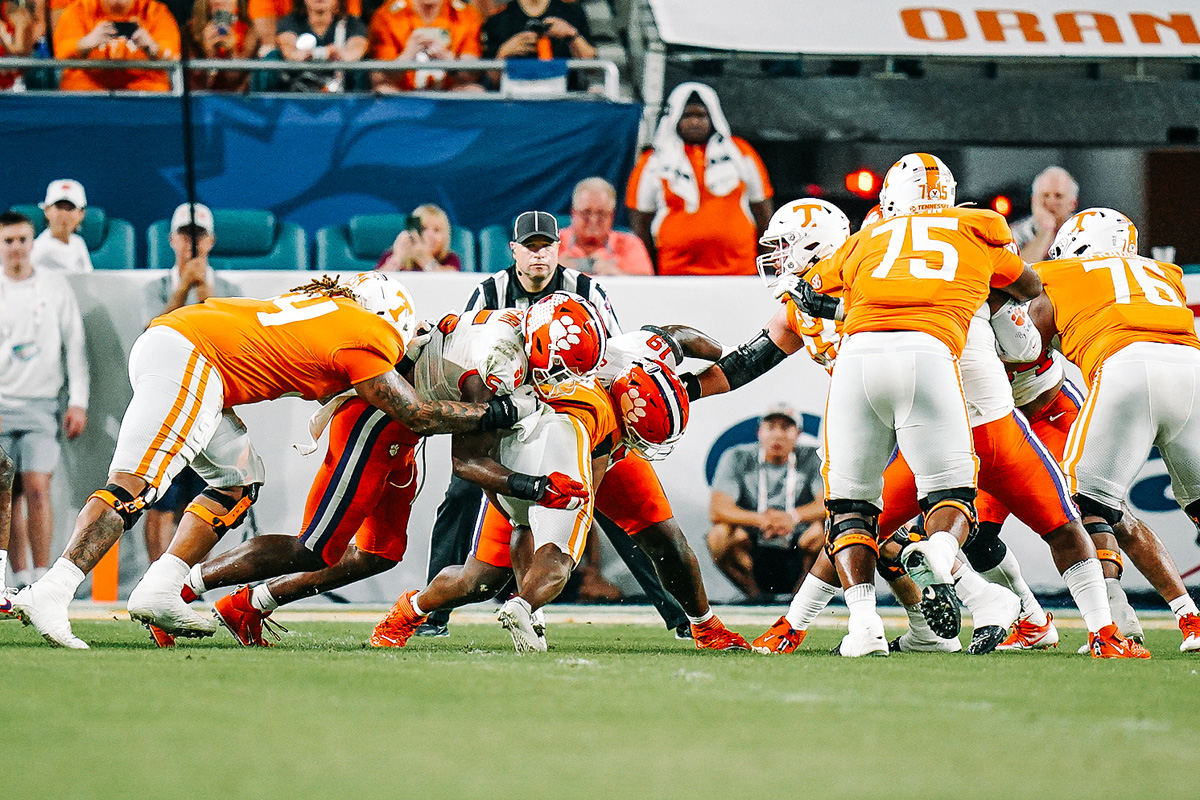 MIAMI GARDENS, Fla. – No. 7 Clemson (11-3) amassed 484 yards of offense and penetrated the Tennessee side of the field on 11 drives but ultimately fell, 31-14, to No. 6 Tennessee (11-2) on Friday night at the Capital One Orange Bowl at Hard Rock Stadium. The Tigers ran 101 plays, the second-highest mark in school history, and produced 34 first downs.

Clemson freshman quarterback Cade Klubnik completed 30-for-54 passes for 320 yards and rushed 20 times for 51 yards and a touchdown in his first career start. On defense, Clemson forced five Tennessee three-and-outs, registered four sacks and produced eight tackles for loss. The Tigers also forced the Volunteers to punt a season-high eight times before Tennessee pulled away late.

Each of Clemson’s first eight drives advanced into Tennessee territory, but the Tigers were unable to convert any of the possessions into touchdowns. Clemson missed three field goals and weren’t able to convert a fake field goal, which allowed Tennessee to take a 14-0 Volunteer lead on a two-yard touchdown run with 9:03 to play in the second quarter.

Clemson scored its first points of the game on its fifth possession, as B.T. Potter converted a 31-yard field goal at the conclusion of a 10-play, 46-yard drive. Clemson trailed 14-3 at the end of the first half despite outgaining the Volunteers, 273-191, and holding a 19-12 edge in first downs. All seven of Clemson’s first-half possessions crossed midfield, which saw the Tigers run 51 offensive plays.

To start the second half, Potter put another three points on the board with a 40-yard field goal. The field goal was the 73rd of his career, pushing Potter past Nelson Welch (72 from 1991-94) for the Clemson record for career field goals.

After an unsuccessful fourth-down attempt by Clemson, Tennessee took the ball 70 yards in 1:22 minutes to score another touchdown, increasing their lead over Clemson to 21-6 with five seconds left in the third quarter.

With 10:01 left in the game, Klubnik rushed four yards into the end zone for the Tigers’ first touchdown of the night. Shipley then punched the ball in for the two-point conversion and cut the lead to 21-14.

Tennessee responded with a 46-yard touchdown pass to take a 28-14 advantage. A late Tennessee field goal brought the final score to 31-14.

Clemson now enters the offseason to prepare for a 2023 campaign in which the Tigers will attempt to push their streak of consecutive 10-win seasons to 13. Clemson’s 2023 schedule is tentatively expected to be announced by the Atlantic Coast Conference later this winter.