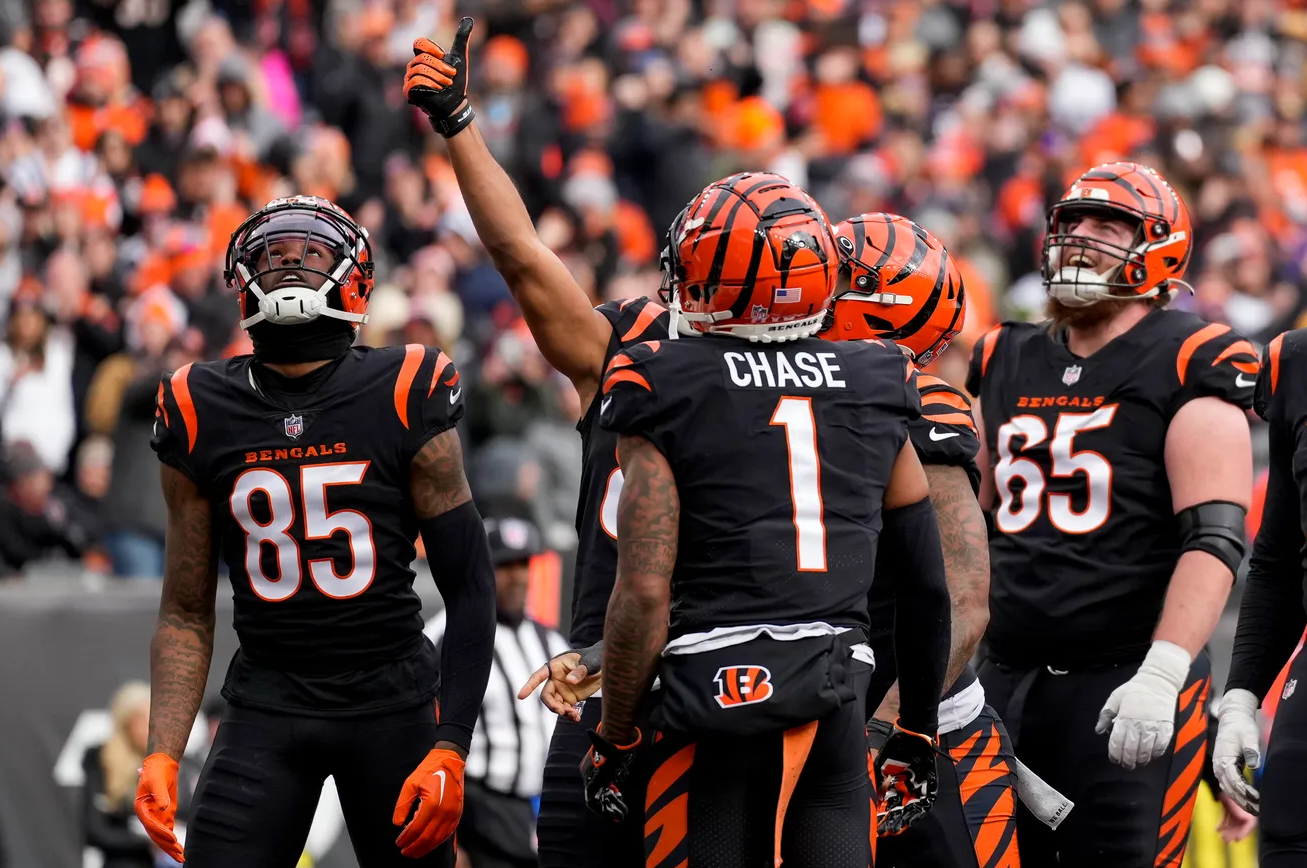 Cincinnati Bengals running back Joe Mixon (28) does his own coin flip after scoring a touchdown against the Ravens on Sunday. Sam Greene/The Enquirer photo credit.

(CINCINNATI, Oh.) – The NFL pulled out all stops in trying to screw the Bengals out of a first-round home playoff game, one that the team and its fans rightly deserved. A newly concocted league rule formulated this week said that had the Bengals lost this one today, there would have been a coin toss to determine home field advantage next week.

Fortunately for those in the Queen City, Cincinnati coaches and players had something to say about that.

They talked first with their games, punching the Baltimore Ravens in the chops, winning 27 – 16 in a rather predictable, physically taxing, regular-season divisional rock fight before another near capacity crowd at Paycor Stadium.

They then talked with their mouths in a celebratory, cigar-smoke-filled locker room afterwards.

“I think our guys did a great job handling [the coin toss decision] the right way,” said head coach Zac Taylor. “They know that winning this game solved a lot of our problems. That’s what they focused on doing. That’s what they got done.”

“We controlled our own destiny,” said defensive end Trey Hendrickson, who had two sacks and a forced fumble resulting in a defensive touchdown. “Everything that we wanted to do was out there on the field. It didn’t matter heads or tails. We controlled our destiny. We’re not playing for a coin flip now. We got a home field game.”

The Ravens never really stood a chance in this one, going with their third-string quarterback, Anthony Brown, in his first NFL start. Fueled by two Brown interceptions and the aforementioned fumble in the endzone, Cincinnati jumped out to a comfortable 24 – 7 halftime lead. Thankfully, that was all the Bengals needed. A rather lackluster offensive second-half performance kept the score close in a game that couldn’t end soon enough.

Quarterback Joe Burrow broke his own career record for touchdown passes in a season with his 35th of the year—a 26-yard toss to Ja’Marr Chase in the second quarter. For the game, Burrow completed 25-of-42 passes for 215 yards and that one touchdown.

After the Bengals win, talks of a coin flip became moot. Joey Franchise and crew will be back at Paycor next week to start on their second consecutive Super Bowl run. As the third seed in the AFC behind Kansas City and Buffalo, they’ll face the sixth-seeded Ravens again in a repeat.

Unlike the fairytale run last year, however, the expectations and the mindset have been a bit different this season.

“This year we expected to win the division, and we just wanted to get to the playoffs,” said defensive end Sam Hubbard, who returned successfully from a calf injury. “Last year we were kind of surprised to get there. It’s a little bit different mentality. As far as our mindset throughout the year, it’s just knowing we’re going to have to play our best football right now.”

Cincinnati certainly has been playing well here recently. They’ve won eight straight ballgames, tying a team record. With their 12 – 4 record, the Bengals become the first team to win back-to-back division titles in the franchise’s 55-year history. They also tie the franchise-best team record of most wins in a season set by the 1981, 1988, and 2015 teams.

For the Bengals moving ahead, it won’t be easy. They lost right tackle La’el Collins to a season ending torn ACL two weeks ago. Today, right guard Alex Cappa went down with an unspecified ankle injury. The postseason isn’t the most opportune time to be patching up your O-line.

The team also needs to somehow find ways to put together full sixty-minute football games. In too many instances this year, they’ve played well for a half and then fizzled. It hasn’t always been pretty.

“This team just keeps finding ways to win,” said Taylor, who knows full well just how hard it is to win the AFC North. “At this point, we don’t care how pretty it’s going to be. We just gotta be the ones to win on top.”