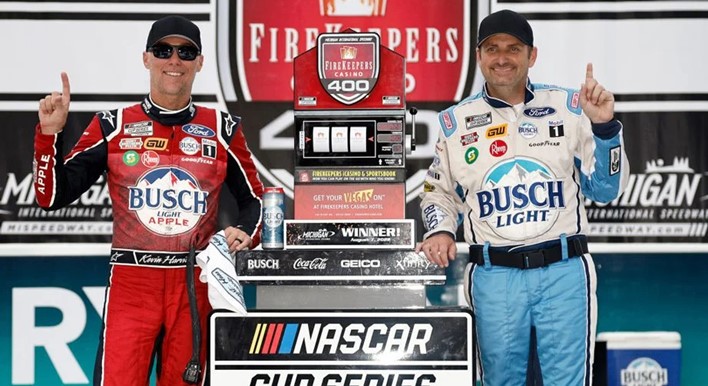 Kevin Harvick announced Thursday that he will retire after the 2023 NASCAR season, bringing an end to a Hall of Fame-caliber career after two-plus decades at the sport’s top level.

Harvick enters what’s scheduled to be his final full-time season as a 60-time winner in the NASCAR Cup Series. The 47-year-old driver’s accomplishments include the 2014 Cup championship, achieved in his first season with Stewart-Haas Racing’s No. 4 team.

“There is absolutely nothing else in the world that I enjoy doing more than going to the race track, and I’m genuinely looking forward to this season,” Harvick said in a team release. “But as I’ve gone through the years, I knew there would come a day where I had to make a decision. When would it be time to step away from the car? I’ve sought out people and picked their brains. When I asked them when they knew it was the right time, they said it’ll just happen, and you’ll realize that’s the right moment. You’ll make a plan and decide when it’s your last year.

“It’s definitely been hard to understand when that right moment is because we’ve been so fortunate to run well. But sometimes there are just other things going on that become more important and, for me, that time has come.”

RELATED: Kevin Harvick through the years | Catch up on offseason moves

Harvick’s run of success has come with two organizations — 23 Cup Series victories with Richard Childress Racing and 37 more with team co-owners Tony Stewart and Gene Haas. The Bakersfield, California, native also scored championships in the Xfinity Series in 2001 and 2006.

“With championships across several NASCAR series and a NASCAR Cup Series win total that ranks in the top 10, Kevin Harvick’s legacy as one of the all-time great drivers is secure,” NASCAR President Steve Phelps said in a statement. “Beyond his success inside a race car, Kevin is a leader who truly cares about the health and the future of our sport – a passion that will continue long after his driving days are complete. On behalf of the France Family and all of NASCAR, I congratulate Kevin on a remarkable career and wish him the best of luck in his final season.”

Harvick was thrust into the Cup Series under tragic circumstances in 2001, called up from the Xfinity ranks by Childress after the death of Dale Earnhardt in that season’s Daytona 500. The ride he took over was changed from Earnhardt’s iconic black No. 3 to a primarily white Chevrolet carrying No. 29.

“Looking back on it now, you realize the importance of getting in the Cup car, and then we wound up winning my first race at Atlanta in the 29 car after Dale’s death,” Harvick said. “The significance and the importance of keeping that car on the race track and winning that race early at Atlanta – knowing now what it meant to the sport, and just that moment in general of being able to carry on, was so important.”

Harvick made that car a winner in his third race out, edging Jeff Gordon by 0.006 seconds at the checkered flag in an emotional victory at Atlanta Motor Speedway. He went on to claim Rookie of the Year honors and notch more crown-jewel triumphs for Childress, including the Daytona 500 (2007), Coca-Cola 600 (2013) and Brickyard 400 (2003).

When Stewart-Haas Racing expanded to a four-car operation in 2014, Harvick was a key part of the organization’s growth. He joined forces on the No. 4 team with crew chief Rodney Childers, establishing what has become one of the Cup Series’ most enduring partnerships.

Harvick became the first champion of the NASCAR elimination-style playoff format, notching five wins and eight poles in his first campaign for SHR. He has qualified for the postseason field each year with Stewart-Haas, winning multiple races in all but one of their nine seasons together.

“I want Kevin to savor every lap this season, to compete like hell and to take it all in,” Stewart said. “He’s made all of us at Stewart-Haas Racing incredibly proud and we want to make his last season his best season.”

Harvick’s mark on stock-car racing is not confined to his driving talent. From 2001 to 2011, he excelled as a team owner, with his Kevin Harvick Inc. (KHI) organization posting 53 wins across the Xfinity and Craftsman Truck Series. Those winning efforts included three championships — two for NASCAR Hall of Famer and fellow California native Ron Hornaday Jr. in the Truck Series (2007, 2009), and for himself as an owner-driver in his last full season of Xfinity competition in 2006.

Harvick’s impact in the broadcasting and sports marketing worlds is expected to continue as he enters this next chapter. His on-air poise and veteran expertise have made Harvick a reliable guest analyst for FOX Sports, and he has anchored recent “drivers only” broadcasts as a play-by-play quarterback. Harvick and his wife, DeLana, have also kept the KHI name alive through KHI Management, a marketing agency that represents fellow drivers and other athletes from mixed-martial arts, bull-riding and professional golf. Harvick also joined Dale Earnhardt Jr., Jeff Burton and Justin Marks as part of an ownership group announced earlier this week for the CARS Tour late model series.

Harvick has also made his influence felt as a senior leader in the Cup Series garage. He has been outspoken as an advocate for safety improvements as the current-model car enters its second year of competition.

The departure of Stewart-Haas Racing’s winningest driver creates a high-profile vacancy with the No. 4 Ford team for 2024. SHR enters this season with Harvick joining returning drivers Aric Almirola and Chase Briscoe alongside newcomer Ryan Preece, a KHI client.

Harvick won two times last year, stringing together back-to-back victories at Michigan and Richmond near the end of the regular season. He failed to advance past the first round of playoff eliminations for the first time in his career.