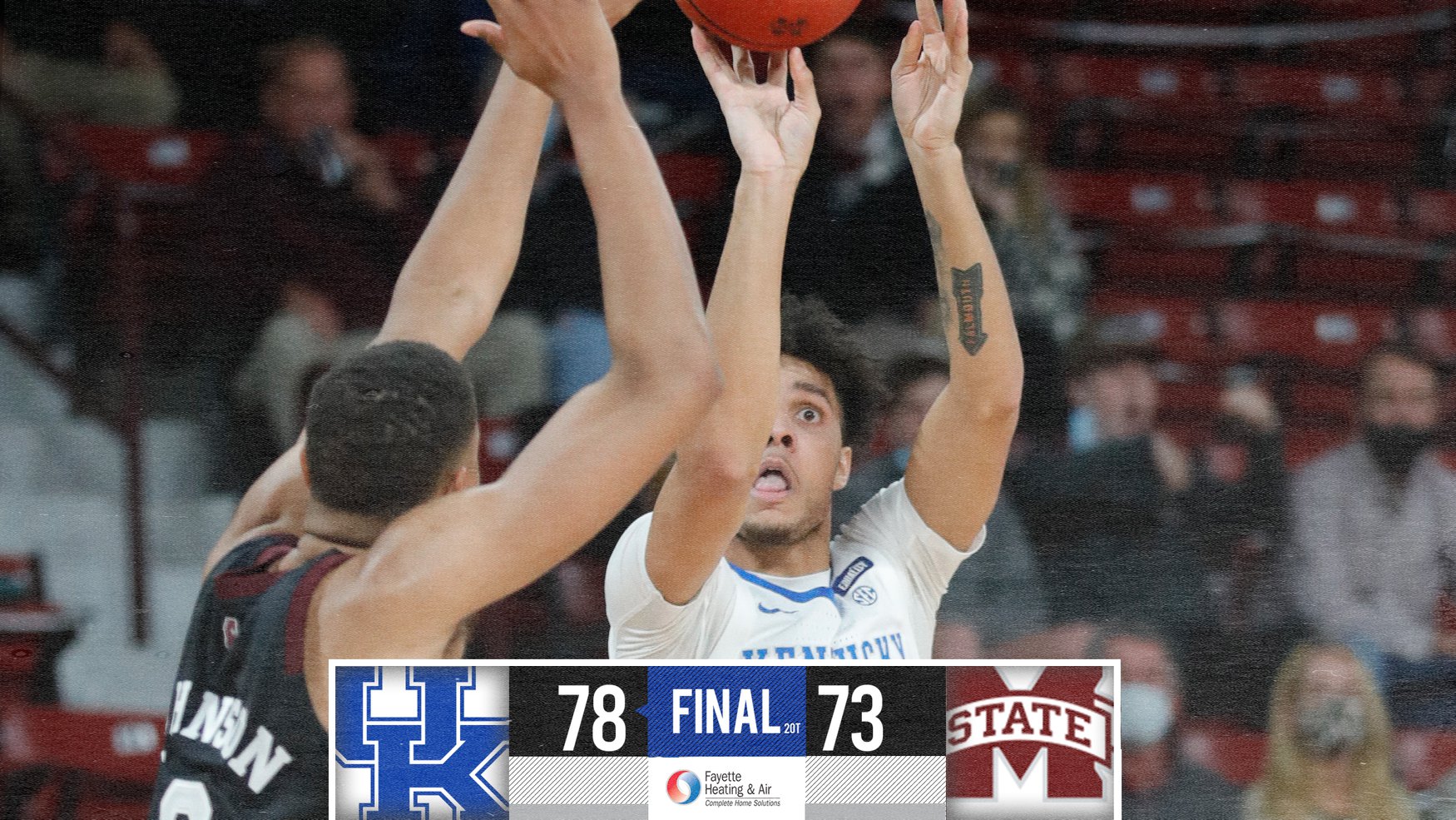 Fans across the state of Kentucky have been asking, “WHERE IS DONTAIE ALLEN”? Sports View America did a special article on Dontaie Allen which can be read HERE. KY Fans also have been wondering where transfer Olivier Sarr has been. Both questions were answered in a big way Saturday as sharp shooting Allen came in and calmly knocked down 7, that’s right, 7 three pointers, while Sarr dropped in 14 points, pulled down 12 rebounds and blocked 2 shots as Kentucky would break their 6 game losing streak. It took double overtime, but Dontaie Allen & Sarrs made sure they would get the win 78-73.

Fans started questioning Coach Cals’ methods in his decision on not letting Allen play. In hindsight, and if the Mississippi State game was any indication, Coach Cals’ decision not to play Allen, may have been a huge mistake for a team that was struggling to score and was in dire need of three point shooting. If UK fails to make the NCAA Tournament, the decision not to play Allen during the teams scoring drought and 6 game losing streak, may loom large. It is not to say Allen would have scored or made a difference in the 6 losses, but it surely could not have been any worse than what happened during their skid.

Kentucky controls their own destiny and must pretty much win the SEC to make it in to the Tournament, so there is no time like the present to go on a roll.

Q: How has Dontaie Allen impressed you tonight?

JC: “That’s what you’re supposed to do when you get a chance. I’m so happy for him [Dontaie Allen]. I said before the game, to the staff, ‘I hope he goes big.’ Because we need to win. We needed a win, and he changed us offensively because he spread the court. In the first half, he passed up about four shots. We were all saying, ‘Shoot it.’

“I’ve got a shoutout to [Transylvania University head coach] Brian Lane because they really helped us. Dontaie [Allen], there, was 6 out of 10, but it got him going. He was exactly the same way in the first half. Then, he goes and starts making shots. He makes one after the other which put him a great frame of mind. I’ve already texted Brian and told him to tell his team ‘Thank You.’

Q: What has Dantaie done tonight that you haven’t seen him do yet? How has he gotten to a point of doing something that he wasn’t doing before?

JC: “You guys know about last year and the injuries and stuff that we went through. But at the beginning of this year, there’ve been signs of this. Again, you’re playing behind some guys that you’re proving now, that they should be playing behind me. He changes our team. The reason we couldn’t score, and you guys all know it, guys couldn’t make shots. It doesn’t matter what you run. It bleeds into free-throw shooting.”

“So, him being able to that, I told the team after, he’s earned more minutes. Some guys are going to end up having to play less. The way we finished the game up – I was in the room, I was pacing. I probably put on about three miles in there watching it on ESPN on my phone.”

“I thought they fought. There was a play late where we had fought for a ball that the guy had an easy basket that we just didn’t give up on. How about Olivier [Sarr], and how he played? Unbelievable. Then, all we talked about all week, is 10 rebounds. He got 14 and made the big three that spread the game open after missing two game-winners shows what he is.”

“And Lance, I thought Lance [Ware] fought crazy and did good stuff. These kids deserve something good to happen, and it did. And again, I know you’re going to say ‘You do this on purpose.’ Look, the first one, yes I did. Because there were two or three things that happened, and we weren’t going to have a chance to win if it didn’t change.”

“The second one was, you know, okay. How about my staff? All those guys on the bench, and they stayed in that zone. Everybody’s been telling me we need to play more zone, but I think it’s going to be a game-to-game thing. We’ve had guys that had to wait their turns and then prove themselves. Dontaie’s attitude was so good. It never changed. He’s a great kid, comes in and spends extra time. Now, he has his chance. Now, all of Kentucky, is going crazy.”

Q: Were you thinking about the ejection at Arkansas, and did you think it would happen in this game?

JC: “When I walked off, I said ‘This is either going to be a good thing or a bad thing’. Then when we started making our run, it was a lot of time. So, I knew it wasn’t four minutes, it was nine. So, we watched it.”

“What I did after the game, I snuck in the back of the locker room in the far corner before they came in because I just wanted to enjoy that celebration. I wanted to see it, and I wanted to enjoy it. I wanted to remember why I do what I do – to see that kind of stuff. Them doing it without me is even better.”

Q: How good does it feel to win, and what did Dontaie [Allen] do to surprise you out there?

OS: “It feels great to win. We definitely needed that. As far as Dontaie, it was a great game. Without him, we are not in that game at all. I’m just proud to see him play like that, play that way. It was a great feeling.”

Q: What did it mean for your confidence that Coach Calipari has kept saying he believes in you and he has his faith in you even though you had those two games in a row where it wasn’t working very well?

OS: “As a player, you can’t rely on your coach all the time. As a coach, being that confident, means a lot. It definitely helped on the court. It took the pressure off – just going out there, playing for the team and helping anyway I could.”

Q: What did you think when Dontaie banked in the shot from the top of the key?

OS: “We have to keep going to him. He can’t miss right now; the bank was open for him. However, he makes it, and it’s going in. That was impressive.”

Q: Was there anything you guys saw as teammates that lead you to believe that Dontaie could do this on a given night in a game where there is a ton of pressure on you all?

OS: “You guys know about the scrimmage we had and that he made that many shots, he was on fire. Every day at practice, we know that Dontaie is a shooter. We know that he can do that, and we always want him to shoot when he is open.”

Q: What was going through your mind when Coach Calipari got ejected?

OS: “For me and the entire team, we knew that might happen. Knowing the past that coach has had in games like that. For us, it was just with coach not being here, we need to execute. We have a great coaching staff. We are just going to be fighting more. That had the spark for us, and it helped us in a way.”

Q: Are you saying that he initially got ejected?
OS: “No, I’m not saying that. Coach had emotion in the game, and he was frustrated. It happens, he got tossed out. We had to step in – the entire coaching staff had to step in and lead us to that win.”

Q: Why do you think the zone defenses were so effective?

OS: “As far as the zone, it was really effective. That is something that we talked about. We knew that they would have some problems with it and definitely worked for us. We communicated, and it worked for us today.”

Q: What have the last few weeks been for like for you as all the fans have been complaining about you not playing more, and what was the pressure like for you today?

DA: “I don’t think it was pressure only because I put in the work. I didn’t know when my opportunity was going to come. Obviously, it could have come today, next week or next month. Nobody knows, so I was just keeping my head down and just working hard. I am thankful for the opportunity I had tonight.”

DA: “I fall back on my work every time. The reason I said there is no pressure is of you put the work in, and you get your opportunity you know you are going to be ready. A lot of people go down a different path – I was just waiting for my opportunity, and I capitalized on it.”

Q: How was the scrimmage helpful earlier this week?

DA: “It was big on momentum. A lot of guys got really comfortable. It gave us a lot of momentum, and it carried over to today.”

Q: Do you think what you did tonight is something you could do every night?

Q: How does it feel to have your moment?

Q: What has been the message to Olivier [Sarr] to keep him going?

DA: “We were telling him in practice to be dominate. I knew he was good for a good game. He had a great week of practice – fighting and playing hard. He was making a lot of shots. Coaches were saying for him to get 10 rebounds tonight. That is big, I so proud of him and the rest of the guys.”