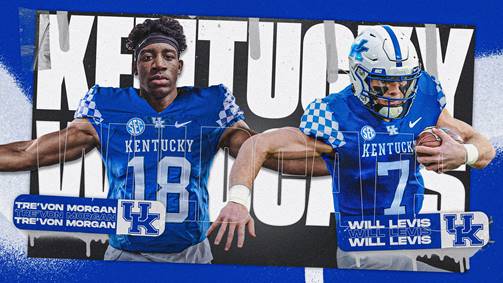 Levis is on track to graduate from Penn State in May with a degree in finance, and as a graduate transfer, will be eligible immediately. Because of COVID-19, every student-athlete has been granted an extra year of eligibility, therefore, he will have three seasons of eligibility remaining.

Morgan will have to sit out the 2021 season due to NCAA transfer rules but could become eligible pending adoption of the NCAA transfer legislation or extension of the blanket waiver. He will have four seasons of eligibility remaining.

“Will is a big quarterback who combines a strong arm and good mobility,” Stoops said. “He’s also had the benefit of significant game experience over the last two seasons and we’re glad to have him join us.”

Levis, a 6-foot-3, 222-pound quarterback, comes to the Bluegrass after three seasons at Penn State. In 15 career games, he completed 61-of-102 passes (59.8) for 644 yards and three scores, with just two interceptions. Often used as a running quarterback, he also had 133 carries for 473 yards and six touchdowns. His 473 career rushing yards rank 10th all-time by a Penn State quarterback.

In 2020, he played in eight games with one starting assignment, completing 33-of-55 passes for 421 yards and a score. On the ground, he had 82 rushes for 260 yards and three touchdowns. Among his highlights, he completed 14-of-31 passes for a career-high 219 yards, including a 74-yard completion in his first starting assignment of the season vs. Iowa. At Michigan, he rushed for 25 yards on six carries and had a two-yard rushing TD, helping the Nittany Lions win 27-17 in “The Big House.”

As a redshirt freshman in 2019, he appeared in seven games with one start and completed 28-of-47 passes for 223 yards with two touchdowns and two interceptions. He totaled 213 rushing yards on 51 carries with three scores. He redshirted the 2018 season.

Levis was a three-year letterwinner for head coach Andy Guyon at Xavier High School in his hometown of Madison, Connecticut. As a senior captain, he earned second-team Walter Camp All-Connecticut honors and was selected to the Connecticut High School Coaches Association (CHSCA) Top 25 list, after breaking Xavier’s records for passing yards (2,793), passing touchdowns (27) and completions in a season. He also was named the Hartford Courant’s Offensive Player of the Year, was an All-Courant first-team selection and earned All-Southern Connecticut Conference (SCC) Tier 1 accolades. In addition, he was the SPARQ MVP for The Opening Elite 11 event in New Jersey in 2017.

An excellent student, Levis was a two-time Academic All-Big Ten selection at Penn State. In 2019, he earned the team’s High Academic Average (cumulative GPA), along with teammate Black Gillikin.

Levis carried a 4.0 grade-point average during his prep career, winning the Brother Celestine Academic Award. He also was chosen as an All-SCC Tier 1 academic athlete in 2017, was a member of the National Honor Society and was a Ryken Scholar.

After using a redshirt in 2019, Morgan saw action in four of Michigan State’s seven games during a shortened 2020 season. He totaled two catches for 46 yards and a score, his first collegiate catch coming on a 26-yard TD at Penn State.

As a senior under head coach Nate Moore, the 6-6 receiver helped lead Massillon Washington post an impressive 14-1 overall record and average 44.7 points per game and 416.3 yards of total offense. The Tigers went on to see their season culminate in a berth in the Ohio Division II state championship game vs. Akron Archbishop Hoban, in which Morgan hauled in two receptions for 29 yards, including a 25-yard catch.

Overall, he had 37 catches for 691 yards and 12 touchdowns on the season and totaled 12 punt returns for 147 yards and one TD on special teams. Defensively, he charted nine tackles, including one for a 1-yard loss. Morgan was named to the 2018 Ohio Prep Sportswriters Association All-State Third Team in Division II.

In the annual Ohio North-South All-Star Classic on April 27, 2018, he was named the North Offensive Player of the Game after snagging five catches for 93 yards and a touchdown.

He collected 36 receptions for 489 yards and two TDs as a junior in 2017, helping Massillon Washington to a 10-4 record in 2017 and a berth in the Ohio Division II state semifinals. He caught a season-best five passes for 49 yards in the regional title game victory over New Albany, Massillon’s first regional championship since 2009.