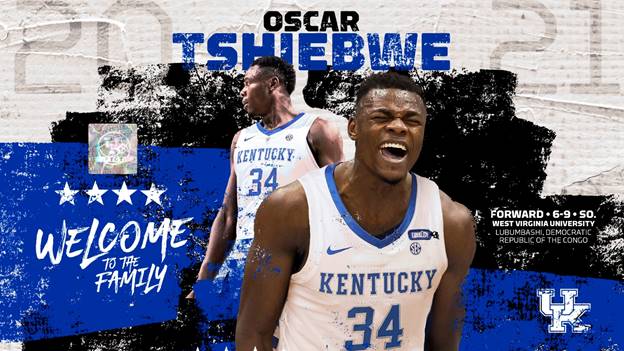 Tshiebwe, a 6-foot-9, 260-pound forward with a 7-5 wingspan, will join the team immediately but will not be eligible for competition for the 2020-21 season under NCAA transfer rules.

“Kentucky just felt like the perfect place for me,” Tshiebwe said. “I love the way they play, the coaches’ players-first approach and just how Kentucky felt like home to me. I’m looking forward to coming in and helping the team this year in practice and I can’t wait to compete for Big Blue Nation.”

Tshiebwe made an instant impact at West Virginia, playing and starting in all 31 games as a freshman. He led the Mountaineers in scoring (11.2 points per game), rebounding (9.3 boards per game) and blocks (1.0) in 23.3 minutes per game, helping guide West Virginia to a 21-10 record. He shot 55.2% from the floor and 70.8% from the free-throw line.

“We recruited Oscar two years ago and absolutely fell in love with his effort, his energy and his desire to improve,” UK head coach John Calipari said. “Oscar has a rare combination of strength and skill with tremendous length, not to mention he’s a wonderful kid. There is no question his time at West Virginia was well spent playing for a terrific coach and friend in Bob Huggins. Oscar won’t be able to play for us this season but we’re looking forward to getting him here and be a part of this culture. He will really help us in practice.”

Prior to West Virginia, Tshiebwe was considered a five-star prospect by Rivals and 247Sports. He was a McDonald’s All American after leading Kennedy Catholic High School (Hermitage, Pennsylvania) to a 27-3 record and the Pennsylvania 6A state title as a senior.

Tshiebwe averaged 23.2 points as a senior and scored 1,480 points during his high school career. He was the 2019 Gatorade Pennsylvania Boys Basketball Player of the Year.

Tshiebwe will be the fourth newcomer to the 2021-22 team. UK already signed highly rated forwards Daimion Collins and Bryce Hopkins and guard Nolan Hickman during the fall signing period. All three players are consensus four- or five-star prospects and all are ranked in the top 50 by at least one major national recruiting service.

Originally from Lubumbashi, Democratic Republic of the Congo, Tshiebwe is the third undergraduate transfer the Wildcats have welcomed in the last calendar year. Current senior forward Olivier Sarr transferred from Wake Forest and sophomore forward Jacob Toppin came from Rhode Island after last season. They have both established leading roles with this young Kentucky team. UK also features graduate transfer Davion Mintz from Creighton, the third season in a row the Wildcats have added a graduate transfer.