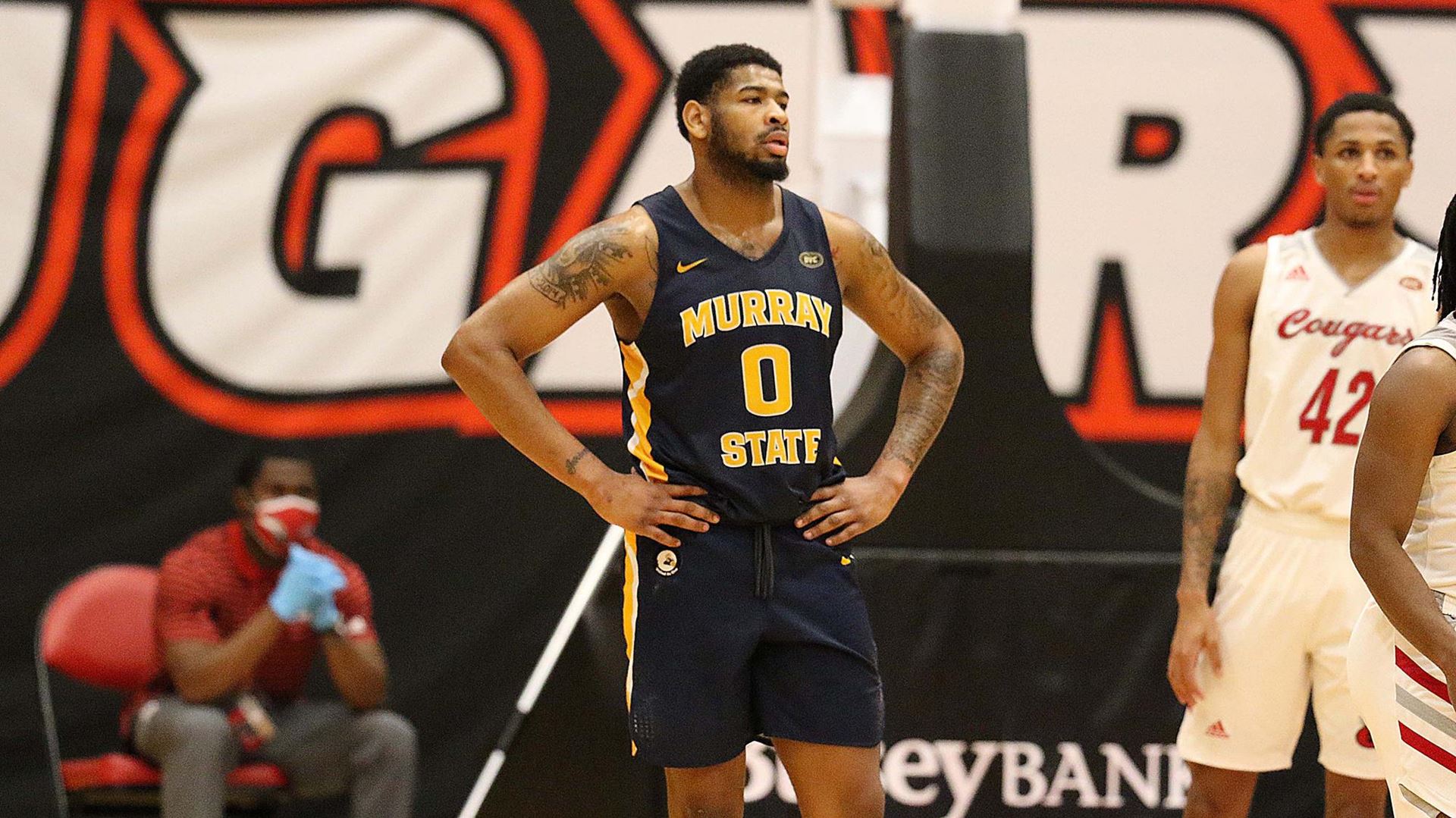 The Murray State Racers pushed their winning streak to four after winning a Monday afternoon game against the SIUE Cougars at First Community Arena in Edwardsville 86-57. With four games remaining in the Ohio Valley Conference regular season, the Racers (12-9) are 9-7 in league play and coming home to host Eastern Illinois Thursday and meet the Cougars again Saturday at the CFSB Center.

KJ Williams recorded his 16th career double-double (seventh this season) with 28 points and 14 rebounds, while Tevin Brown scored 18 on 6-of-9 from the 3-point line. Chico Carter, Jr. added 14 points and Demond Robinson had his fifth double-digit scoring game in his last seven games with 10 points. Justice Hill hit a pair of 3-pointers off the bench and scored eight points.

The Racers hit their first three 3-point attempts to grab an 11-8 lead and stretched that to 18-9 on a 7-0 run a little more than seven minutes into the game. Hill’s threes pushed the Racers in front 23-10 at 11:58. Carter scored for MSU’s largest lead of the game with three seconds left and the Racers enjoyed a 46-30 advantage at the halftime intermission.

Entering the game ranked ninth in NCAA D-I with 17.2 assists per game, the Racers notched 11 assists on their 17 first half field goals. Ninth in the nation in field goal percentage at .507, the Racers hit 17-of-31 shots in the first 20 minutes for a percentage of .548.

Williams scored seven straight points at the start of the second half, using his third-straight 3-pointer of the day for a 23-point MSU lead (58-35) with 16:31 left. MSU later went 4:24 between made baskets, but held SIUE to only four points in the segment to keep a 70-52 lead with 7:45 left. Brown put the game away with back-to-back threes for a 78-56 lead with 5:41 remaining.

Game Notes
The four game winning streak is the longest of the season for the Racers. They have also won five of their last six games.

The Racers held SIUE to zero offensive rebounds in the first half. They also did this against UT Martin in Saturday’s win.

Williams now has 985 points and is trying to become the 48th member of the MSU 1000-Point Club.

This week’s games with EIU and SIUE mark the end of the 23rd regular season in the history of the CFSB Center.

About MSU Athletics Mobile Ticketing
Beginning with the 2020-21 basketball season, all Murray State Athletics tickets will be distributed via mobile delivery and no physical ticket sheets will be printed in accordance to guidelines from the Commonwealth of Kentucky. Season ticket holders can use the http://am.ticketmaster.com/murray site to access and manage their tickets. Going mobile is the most convenient and flexible way to receive and manage tickets while increasing protection against fraud. Mobile tickets reduce the risk of lost, stolen, counterfeit or forgotten tickets and quick and contactless entry into the venue.

Racer Restart – Basketball
Through the Racer Restart initiative and planning process, Murray State University will follow a collaborative, thoughtful and proactive approach in re-opening campus. This process includes athletics and our goal to offer you the same Racer brand you have enjoyed over the years in a way that is safe for everyone – the student-athletes, the coaches, the staff and the best fans in the OVC, Racer Nation.

FAQ About Racer Restart For Basketball

About Murray State Athletics
Located in Murray, Kentucky, the athletics department at Murray State University is a member of NCAA D-I and plays in the Football Championship Subdivision. The Racers have 15 programs including men’s teams for baseball, basketball, cross country, football, golf and women’s teams for basketball, cross country, golf, soccer, softball, tennis, track & field and volleyball. MSU also has a rifle program that is coed. The Racers are one of the founding members of the Ohio Valley Conference from its beginnings in 1948. Kevin Saal has served as director of athletics since March 2019.