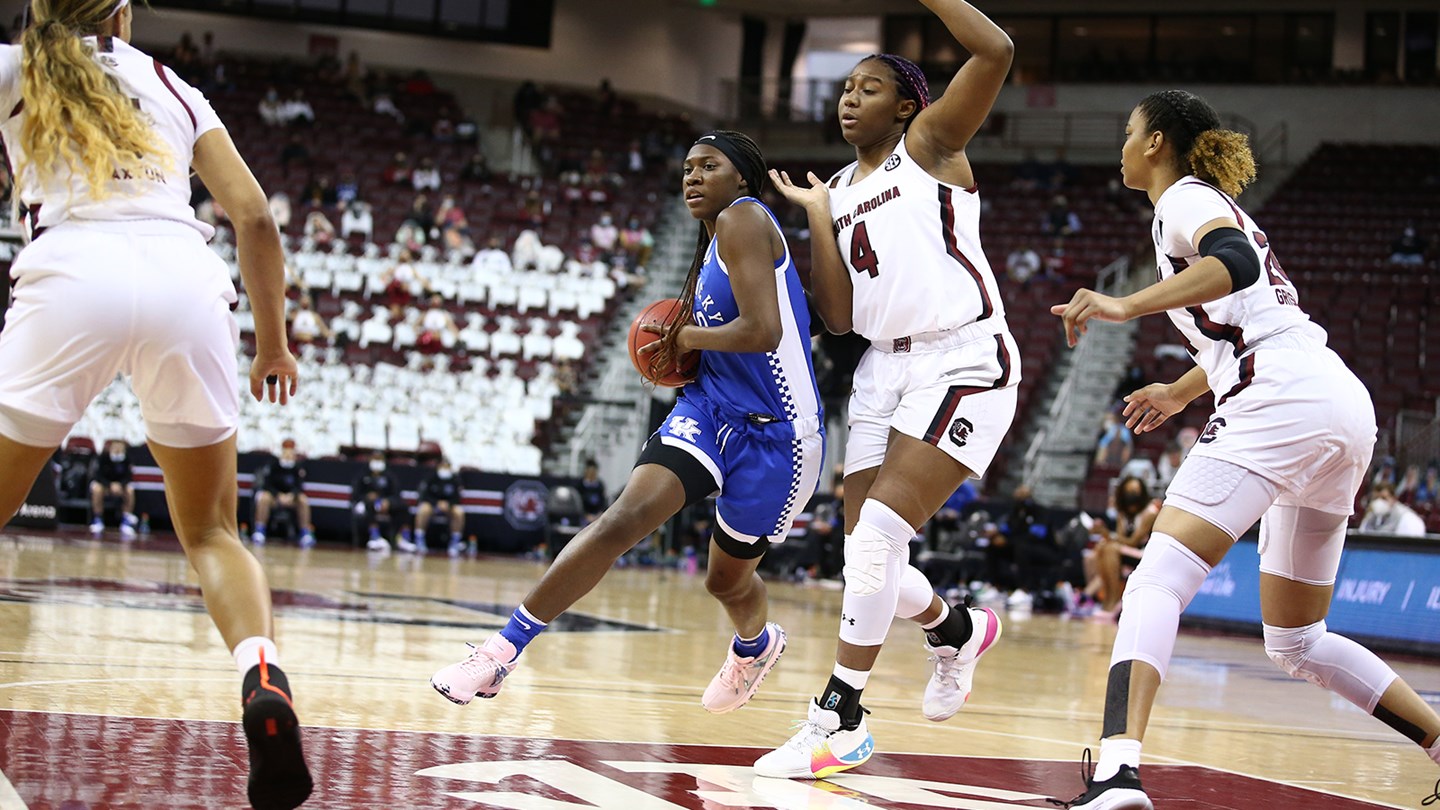 No. 17 Kentucky Falls at No. 2 South Carolina

Wildcats back in action Thursday at top-20 ranked Georgia

Chasity Patterson had nine points for Kentucky, while Dre’una Edwards and Tatyana Wyatt each had seven. Jazmine Massengill had six points, five assists and three rebounds for the Cats.

The taller Gamecocks outrebounded the Cats 49-30 in the game. Included in that number were 20 offensive rebounds for South Carolina, which led to 18 second chance points. The Gamecocks also scored 16 points off Kentucky turnovers, while the Cats scored just six points off South Carolina miscues.

Both teams came out cold, with South Carolina missing its first six shots and Kentucky missing its first four. The Gamecocks scored first on a pair of Zia Cooke free throws but the Cats tied the game on a slashing layup from Patterson. Kentucky took its first lead, 3-2, on a free throw by Edwards with 6:35 left in the first period.

Kentucky (15-6, 8-5 SEC) took the lead back early in the second period on a three by Massengill. However, Howard picked up her second foul and went to the bench shortly thereafter. At that point, South Carolina scored the next 10 points to lead 24-15.

Howard returned and the Cats got consecutive baskets from Robyn Benton and Edwards to cut the deficit to 24-19. But South Carolina again answered, this time with an 8-2 run to take a 32-21 lead.

Near the end of the half, Howard got hot, hitting consecutive threes that were part of a 9-2 run to close the half. South Carolina would lead 34-30 at the break.

The Gamecocks scored the first four points of the third quarter and went on a 9-2 run to lead 43-32. From there, the lead would stay between nine and 11 points until South Carolina scored five in a row to grab a 54-40 lead late in the third quarter.

Kentucky would get a layup from Patterson with 33 seconds left in the period but just before the horn sounded, Cooke hit a three to give South Carolina a 57-42 lead after three periods.

The Cats would score the first four points of the final period on a Tatyana Wyatt jumper and a pair of Howard free throws, cutting the deficit to 57-46. South Carolina answered with a Destanni Henderson three, starting a 9-0 run that put the game away.

Kentucky returns to action on Thursday, visiting Georgia in Athens. Tipoff is set for 7 p.m. ET and the game can be seen on the SEC Network.

WOMEN’S BASKETBALL POSTGAME NOTES / NO. 17 KENTUCKY VS. NO. 2 SOUTH CAROLINA