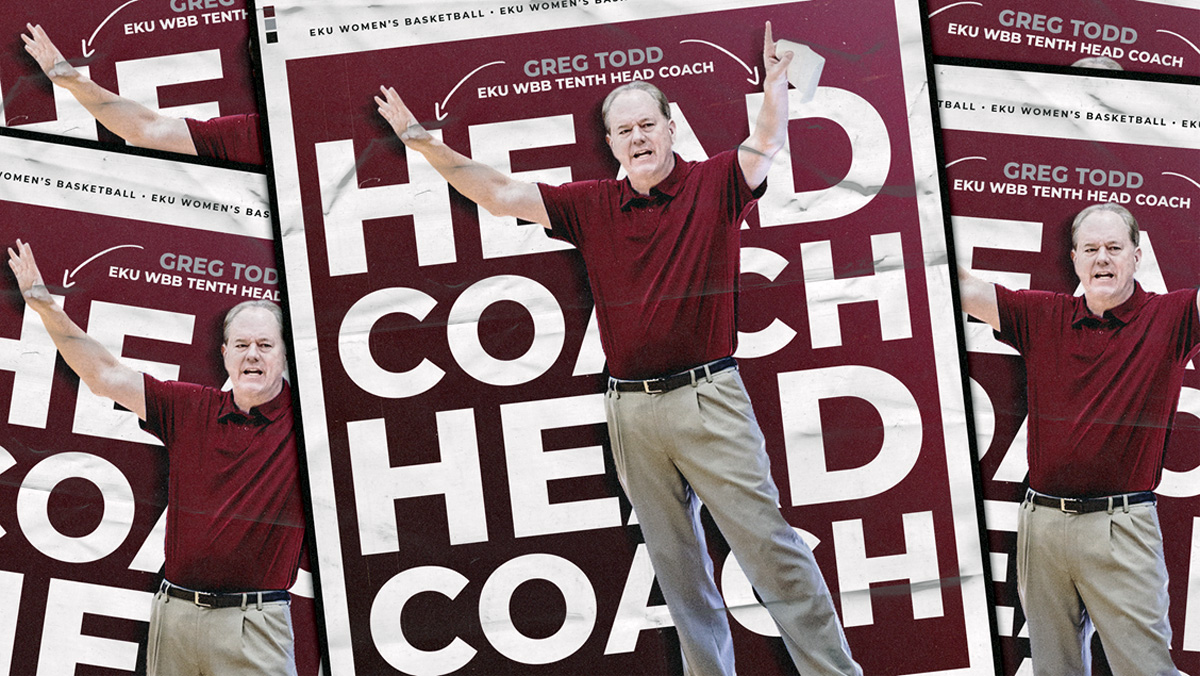 Todd, a Madison County, native who has spent his entire 29-year head coaching career inside the Commonwealth of Kentucky, becomes the tenth head coach in program history.

Todd most recently served as the women’s basketball head coach at Morehead State University for the last seven years. He led the Eagles to three straight 20-plus win seasons from 2016 to 2019 with two WNIT appearances. During the 2018-19 season, his team advanced to the second round of the WNIT after upsetting Big Ten foe Ohio State in the first round.

EKU will host a reception and press conference for Todd on Wednesday at 10:30 a.m. at McBrayer Arena.  All fans and media are invited to attend.  Please observe social distancing and masks requirements.

“As we set out to hire the next head women’s basketball coach to elevate our program, we were pleased with the interest in our position and the opportunity that lies ahead of us. At every step in our process, Greg Todd rose to the top as the ideal coach to lead us at this exciting time,” Roan said. “He’s a coach who has dedicated his entire coaching career to women’s basketball, has experienced amazing success with each program he’s led, has a wealth of experience and understands the landscape, and knows our state incredibly well.  His love for his alma mater and desire to build a championship-contending program here are unmatched. He comes highly recommended from all corners of Kentucky and beyond, and those folks speak not only to his ability as a coach, but also to his quality as an individual. He’s tested and proven, and we’re excited to have him in charge of the Colonels and leading us to victories!”

The success between 2016 and 2019 marked the first time in program history that Morehead State had three straight 20-win seasons.  The Eagles’ 36 Ohio Valley Conference victories during that time is also the most-ever during any three-year period.

Todd recruited two top-50 nationally ranked players, the highest rated recruits in Morehead State history.  He also recruited the junior college national player of the year. Under Todd’s guidance, the Eagles’ had a team grade-point-average of 3.0 or better each of the past six years.

“It’s a great time to be a Colonel under the leadership of Athletics Director Matt Roan and President David McFaddin, and to build the women’s basketball program at EKU,” Todd said.

In his eight years at Transylvania he helped produce four Heartland Collegiate Athletic Conference (HCAC) Players of the Year.

During his time as a collegiate coach, Todd has compiled a 261-169 record with four conference championships and five post season appearances.

Todd’s teams finished ranked in the top-10 nationally in 2005 and 2006. His 2005-06 team at Lexington Catholic finished the season ranked No. 3 in the nation by USA Today, which stands as the highest final ranking ever for a boy’s or girl’s Kentucky team. Todd was named EA Sports National Coach of the Year following that season.

In 2017, Todd was inducted into the Kentucky High School Basketball Hall of Fame.

“Being from Madison County, I am so excited to come home and get the women’s basketball program to the top of the ASUN Conference as quickly as possible,” said Todd. “I am excited about being able to build a bigger fan base with my local connections around the community.”

Todd started his head coaching career at Berea Community High School where in seven seasons he led his team to a 166-54 record and an appearance in the state final four in 1998. Berea won 20 games every year under Todd, despite never winning 20 or more games before in school history. He is a member of the Berea Community High School Hall of Fame as a coach and basketball player.
“I am looking forward to re-recruiting and building a strong relationship with the players already on campus,” Todd said.

Fans can get a head start on reserving their season tickets for the 2021 season. Call toll free, 844-3-GOBIGE to discuss ticket options for the new season.