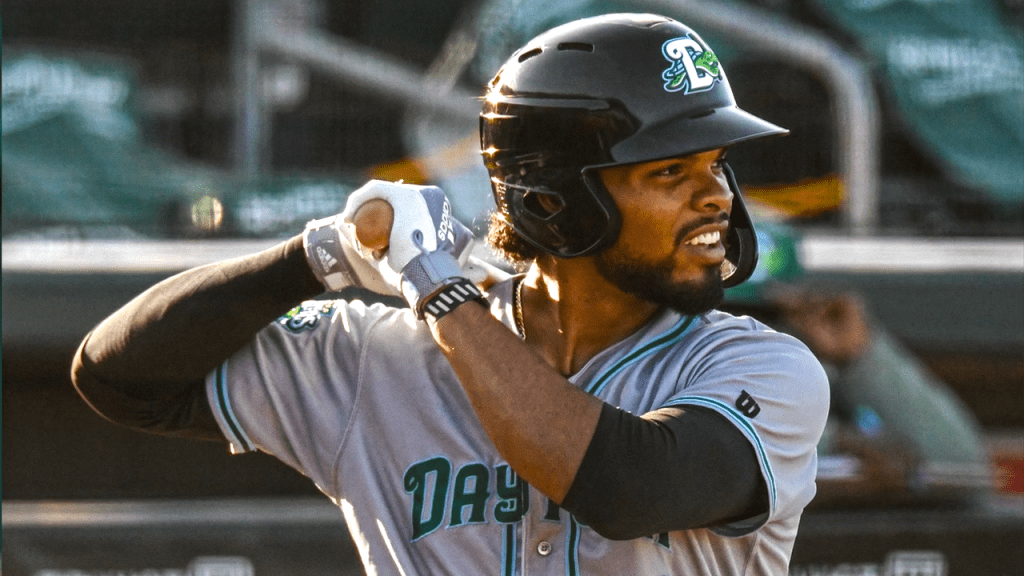 Daytona erases two three-run deficits, set new Tortuga record for runs in triumph
JUPITER, Fla. – Trailing by three runs twice, the Tortugas erupted for ten straight runs beginning in the fifth. An 18-run, 13-hit performance guided Daytona to a 17-8 victory over the Palm Beach Cardinals on Saturday night at Roger Dean Chevrolet Stadium.
Behind 6-3 in the top of the fifth, Tortugas (3-2) C Daniel Vellojín (0-3, 2 R, 2 BB) walked, 2B Tyler Callihan (3-6, 2 R, 2B, RBI) doubled, and 3B Rece Hinds (1-4, 2 R, RBI, BB, SO) got drilled by a pitch to load the bases.
On the first pitch he saw, DH Debby Santana (1-6, 2 R, 3 RBI, SO) uncorked a sharp liner that stayed fair down the left-field line to clear the bases, tying the game at six.
After re-loading the bases via a hit-by-pitch and walk, Daytona took the lead on a wild pitch and added to their advantage on a run-scoring double play. RF Danny Lantigua (3-5, 2 R, 2B, HR, 4 RBI, SO) capped the six-run, 10-batter frame with an RBI double to put the Tortugas in front, 9-6.
Two innings later, it was Lantigua at the center of the attack once more. SS Ivan Johnson (1-3, 3 R, HR, 2 RBI, 2 BB, 2 SO) walked and stole second, while LF Wendell Marrero (0-4, R, SO) got plunked to put two men on. The 22-year-old then rifled the second offering over the right-field fence at 111.8 mph for a three-run home run — his first of the season — to double the Daytona edge to six, 12-6.
The Tortugas put the game to rest during the top of the eighth. Following a single by Callihan and a walk to Hinds, CF Allan Cerda (2-3, 3 R, 2B, HR, 3 RBI, BB) continued his torrid beginning to the year. The right-handed swinger cranked a 434-foot moonshot to dead centerfield for a three-run shot — his second — to make it a 16-6 affair. 1B Alex McGarry (2-4, R, HR, RBI, BB) — making his professional debut — launched one out to right two batters later for his first career long ball.
Daytona tacked on two extra tallies in the top of the ninth courtesy of run-producing ground outs from Callihan and Hinds to increase the ‘Tugas run total to 18. That final number is the most the team has scored since Daytona rebranded to the Tortugas before the 2015 season. The previous high had been 16 in a win at St. Lucie on July 26, 2015.

For the fifth consecutive game in the series, Palm Beach (2-3) dented the scoreboard first. C Carlos Soto (4-6, 2 R, 2B, HR, 5 RBI, SO) cranked a two-run home run — his first of the year — in the opening frame. An inning later, he delivered an RBI single to put the Cardinals up 3-0.

Daytona rallied to tie it in the top of the fourth. Subsequent Hinds single and a fielder’s choice, Cerda doubled to bring up Johnson. The Georgia native jolted one to the opposite field in left for a three-run clout, his first of the season.

The shared score was short-lived, as the Redbirds regained the lead, 6-3, in the bottom half of the inning on a three-run two-bagger by Soto.

Of note, after serving as the Tortugas designated hitter and left fielder in respective ends of Friday’s doubleheader, RH Garrett Wolforth (1.2 IP, 3 H, 2 R, 2 ER, BB, SO) entered as a relief pitcher on Saturday. Entering in the seventh with two on and one out, the Texas resident induced a soft line-drive double play to get out of the jam.

Daytona will search for victory in the series on Sunday afternoon. RHP James Proctor (0-0, 0.00) — who hurled three scoreless innings of relief on Tuesday — is scheduled to take the hill for the Tortugas. Palm Beach projects to counter with its season-opening RHP Nick Trogrlic-Iverson (0-0, 0.00).

The Tortugas return to Jackie Robinson Ballpark and will roll out the green carpet for their long-awaited home opener against the St. Lucie Mets, Low-A affiliate of the New York Mets, on Tuesday, May 11. Gates will open at 6 p.m. ET. The first pitch is scheduled for 7:05 p.m.

Season ticket, multi-game plans, group packages, and more are currently available and can be purchased online at www.daytonatortugas.com or by calling the Tortugas’ Ticket Office at (386) 257-3172.