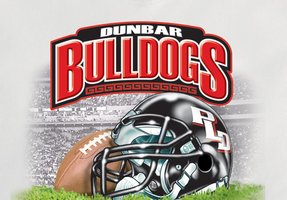 The Bobcats from Breathitt County looked to be a handful for the Paul Laurence Dunbar Bulldogs, that is, for the 1st half. Breathitt had tied the score at 22 when Dunbar’s Cole Colony hit K. Robinson for a 20 yard pass for a touchdown with 44 seconds to go in the half for a 29-22 lead at the half.

The game got off to an ominous start as Erik White of Dunbar would take the opening kickoff 84 yards for a 7-0 Bulldog lead. Breathitt would shake off the kickoff return touchdown when Breathitt’s all everything Jaylen Turner would score from 3 yards out. Turner would also score on the two pint conversion capping a 14 play 98 yard drive and giving the Bobcats their first and only lead at 8-7.

Dunbar would strike next as Mason Hayslett would score on a 2 yard run making it 14-8. The Bulldogs would open the 2nd quarter with a K.Robinson 2 yard run followed by a Terry Tinsley 2 pt conversion making the Dunbar lead 22-8.

The second half would open with Shyhiem Drew catching a 65 yard pass from Cole Colony giving Dunbar a 36-22 lead. Breathitt would bounce back on a Caden Bowling 1 yard run at the 5:10 mark of the 3rd quarter. The Bobcats would cut the Bulldog lead to 36-28 as the Jaylen Turner 2 point conversion run would fail.

Dunbar was led in rushing by K. Robinson who had 129 yards on 11 carries. Cole Colony would hit on 13 passes in 21 attempts. Shyhiem Drew led the receiving core with 3 catches for 86 yards.

The team stats were in favor as Dunbar. Breathitt would amass 413 yards while Dunbar had 514 total yards. The Bobcats would run for 173 yards compared to Dunbars 302. The passing game saw Breathitt with a 240 yards on 38 attempts as Dunbar would end up with 214 on 21attempts.

Paul Laurence Dunbar will play at home Friday August 27th at 7:30pm hosting Madison Central. Madison Central under new coach Mike Holcomb is coming off a season opening loss a home to Lexington Christian 21-12.
Breathitt County Bobcats will play at home against Powell County Friday August 27th at 730pm. Powell County is coming off a 29-6 home loss to Estill County and should be a good game for Breathitt to bounce back.