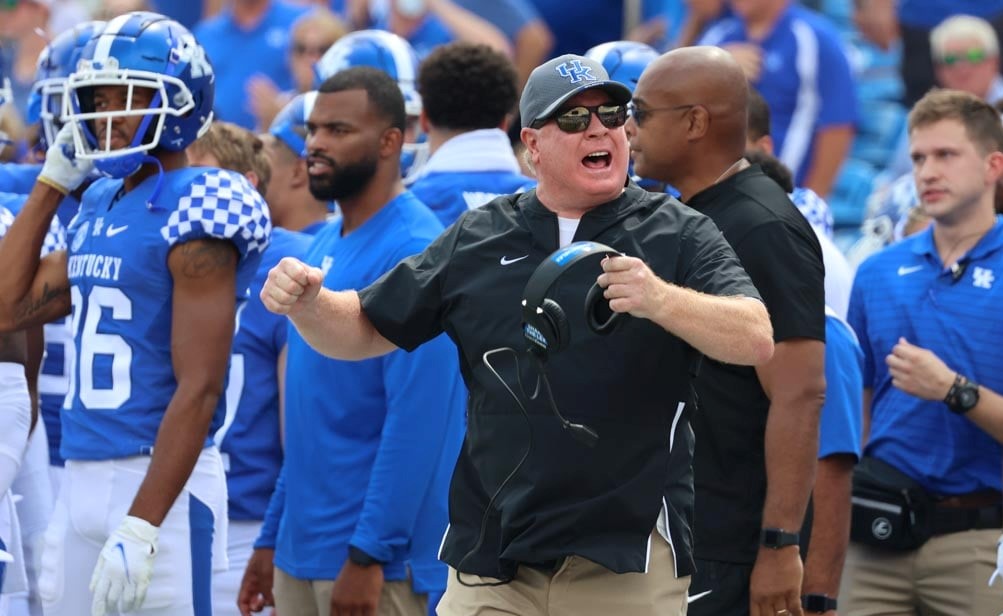 (LEXINGTON, Ky.) – Does anyone remember the volatile Mark Stoops—the one who would fly off the handle at the first sign of a missed assignment, an inopportune lapse in judgment, or a blown official’s call?

If you don’t remember, don’t feel bad because neither does Mark Stoops. The Kentucky head football coach bristled when asked about the calmer, gentler persona we saw roaming the sidelines on Saturday. Not only did he bristle, but he claimed his alleged fiery on-field rants earlier in his career were a figment of media imagination.

“That’s thanks to a perception that you guys put on me,” he said to laughter at his weekly meeting with media. I don’t ever do that. Show me a coach in America that doesn’t at some point or another [get emotional].”

Point well taken. But anyone who has followed UK’s football fortunes over the past few years knows to avoid Stoops’s angry side at all costs. Even first-year offensive coordinator Liam Coen was somewhat surprised at his boss’s calm sideline demeanor.

“I loved the dialogue that I was able to have with the staff and Coach Stoops,” Coen said immediately after the game. “He was awesome. It was nice to be around, especially after hitting adversity early. He could have turned around and gotten pissed and really angry. It wasn’t like that.”

I actually like my football coaches to a bit on the volatile side. I enjoy leaders who wear their emotions on their sleeves, who pace the sidelines, giving the officials an earful when their team’s been shafted. Stoops has been known to throw a few headphones when his blood pressure inches upwards. Who can ever forget the time he stormed onto the field, shouting at the opposing sidelines during the bowl game against Georgia Tech in the 2017 TaxSlayer Bowl? I fully expected fisticuffs to follow.

So what does Stoops attribute to becoming this gentler, kinder self? Whether he wants to admit it or not, a tincture of time and a dose of maturity can often mellow even the hardest of hearts.

“Listen, I pride myself in it, and I coach my way through it,” he said, trying to explain how he’s not the raving lunatic people perceive. “Believe me, it’s been nine years. I told you, I talk to people, I need psychologists, I need people to help me be prepared for all situations. Over time, I don’t think I’ve ever…I’ve prided myself on keeping my composure and keeping things in control. Am I perfect, no. Maybe you are, I’m not. You know what I mean? We always try to get better as well.”

I couldn’t have explained it any better myself. Let’s see what happens when the bullets start flying against Missouri this Saturday. Nicer Stoops or not, I’ll be sure to get out of his way.

Dr. John Huang is a columnist for Nolan Group Media and editor-in-chief of JustTheCats.com. His new book, CUT TO THE CHASE, is now available on Amazon. His newest Kentucky Basketball book, KENTUCKY PASSION, is scheduled for October release. If you enjoy his writing, you can follow him on Twitter @KYHuangs.