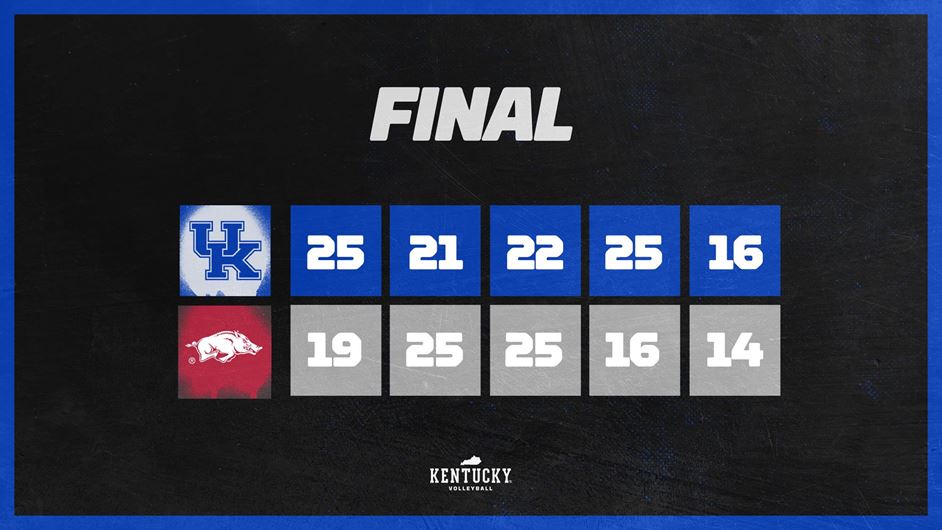 It is the second five-set win in as many nights for the Wildcats, who Saturday fended off a match point for the Razorbacks at 14-13 and rallied to win the final three points of the match to put the Wildcats on top for the second-straight night.

Stumler co-led Kentucky with 17 kills, joined by sophomore Madi Skinner as Stumler hit .234 in the match and had 12 digs for her second-straight double-double. Skinner also had a double-double with 17 kills and 10 digs Saturday night as both had three blocks.

Blocking was the key to the match as Kentucky set a new season high with 16 in the match thanks to seven from Azhani Tealer to lead all UK players and six from Bell Bell. Bell had a tremendous block at 14-14 to give Kentucky match point before a Stumler termination ended the match.

The Kentucky offense was streaky all night, but was led by the steady hands of Emma Grome who operated the Wildcats offense to a .290 hitting percentage for the match and .333 in the fifth set. Grome had 55 assists with seven digs and five blocks.

Eleanor Beavin led the Kentucky defense with 20 digs on the night, adding another feather into her cap of a sensational freshman season. Beavin also had three assists and a service ace in Saturday’s match.

Kentucky improves to 8-0 in Southeastern Conference action, the only remaining unbeaten in the league. The Wildcats are now 15-3 overall. Arkansas falls to 5-4 in the SEC and 14-6 in all matches.

UK will travel to Knoxville for a battle of the top-two teams in the SEC as UK is 8-0 and UT is 8-1. First place will be on the line Wednesday night at 6 p.m. ET on ESPNU with Sam Gore and Jennifer Hoffman on the call from Rocky Top.

Kentucky started slow out of the gates, trailing 6-1 early in the first set, but chipped away to close the gap and eventually took its first lead at 12-11 and ran off two points into a row into the media timeout at 15-13. Back-to-back blocks by RS-sophomore Bell Bell sent the Wildcats into a set-high five-point lead at 18-13, and the Razorbacks called a timeout. Alli Stumler ended one of the longest rallies of the season with a kill from the left side to give Kentucky a 22-17 lead and Arkansas requested its final timeout as a result of Stumler’s second kill of the set. Azhani Tealer ended the set from the right pin with her second kill of the match to close out a 25-19 first set for Kentucky. UK hit above .350 and held the Razorbacks to under .200.

UK was uncharacteristically sloppy to start the second set and found itself down 15-13 at the media timeout of the frame after three-successive Razorback points to lead into the stoppage of play. The two-point Arkansas lead of 15-13 was the largest for either side to that point in the second set with the first 28 points played within a four-point window. The Razorbacks caught a lucky break on a kicked ball in what appeared to be a Madi Skinner kill from the left pin, and converted it into a point and trailing 21-18, UK called its first timeout with the Razorbacks ahead by three. Kentucky fell in the crucial points down the stretch to drop the second set, 25-21.

Madi Skinner’s 11 kill of the match put the Wildcats into the lead going into the media timeout of the third set as a left-pin kill fell to the floor as UK’s lead grew to two points. To that point, Arkansas never had a lead in the third set and UK’s largest lead was three at 8-5 before the Razorbacks sided out to climb back within a pair. A 3-0 Arkansas run buoyed by UK serving woes gave the Razorbacks their first lead of the set at 17-16, and UK responded with a block by Rutherford to tie the score back up at 17 all. After another run of points by UA, Kentucky called a timeout trailing 19-17. An Azhani Tealer kill out of the middle, her seventh, pushed Kentucky into the lead at 20-19 and Arkansas promptly responded by calling its first timeout of the set. After Kentucky took a 22-21 lead, Arkansas sided out and got a kill off the Kentucky block to take a 23-22 lead over UK and Craig Skinner called his final timeout. Arkansas went on a 4-0 run to close out the set and took a two sets to one lead, 25-22.

Kentucky played its most clinical set of the weekend in set four, hitting .323 in the frame and crushing the Hogs, 25-16. With its backs to the wall, Kentucky went out to a 17-10 lead and Arkansas was forced into calling a timeout before UK extended its lead down the stretch. Arkansas’ latest lead in the set was 7-6 before UK flipped the score for good thanks to impressive killing from Alli Stumler and Madi Skinner on the pins with timely blocking from Elise Goetzinger in the middle. Kentucky ended up closing out the set 25-16 to force a fifth.

Kentucky raced out to a 4-2 lead, the first multi-point lead of the frame. After leading 4-2, Arkansas ran off four-straight points against the Wildcats to take a 6-4 lead and Kentucky called its first timeout. The Wildcats tied the set back up at 7-7 thanks to an Azhani Tealer kill before Arkansas took control at 10-12 and smelling blood. Kentucky fired back with an Arkansas service error and side out to tie the match at 12-12 and Arkansas called its first timeout. Out of the stoppage, a termination and service error put Arkansas ahead 14-13 and Kentucky called its final timeout facing a match point. Kentucky won the point to level the set at 14-14 before a huge block by Bella Bell and Alli Stumler gave UK the upper hand at 15-14 and a kill from Stumler ended the match on a rather extended rally as Kentucky put away the Razorbacks, 16-14 in the fifth set.