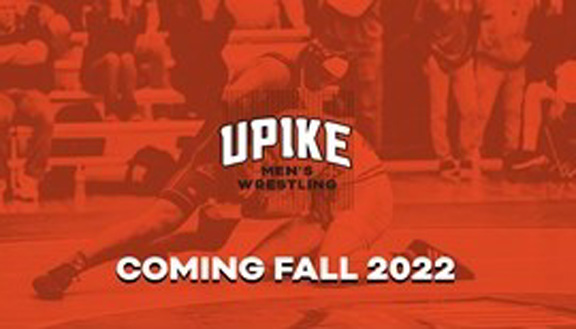 Pikeville, KY – The University of Pikeville Athletics department is excited to announce the addition of Men’s Wrestling to its lineup of programs starting in the Fall of 2022.

The move aligns with the growing status of the sport both at the state and national level. Men’s Wrestling will bring the total to 26 varsity sports offered by UPIKE.

“Adding a wrestling program is something we’ve diligently been planning and considering for some time now,” said Director of Athletics, Kelly Wells. “The sport has seen unprecedented growth in recent years, in the Mid-South Conference and across the NAIA. I’m excited to watch the program grow and reach a new community of student-athletes here at UPIKE.”

The NAIA has a rich history with wrestling, holding championships for the sport dating back to 1958. The Mid-South Conference began with men’s wrestling in the 2009-10 season, holding it’s first official conference tournament that year and the first regular season in 2011-12. 12 total members compete in the sport of men’s wrestling in the MSC, comprised of six full members (Lindsey Wilson, Cumberlands (KY), Thomas More, Life, and Cumberland (TN) and six affiliate members (Midway, Rio Grande, Southeastern, Brewton-Parker, St. Thomas, and Keiser).

The current structure of the sport in the MSC involves north and south divisions, each containing six teams. The conference holds divisional championships for both the North and South each February. The regular season typically begins in mid to late October and ends in mid-February.

UPIKE Athletics has acquired a facility that will serve as the home of the wrestling program as well as Bowling and archery. In coordination with administration, plans are moving forward for the new building and details will be released in the coming weeks.

A nationwide search is currently in progress for the first head coach of UPIKE men’s wrestling, details and application procedure can be found here. The men’s program will serve as the starting point for the Bears, with plans to offer women’s wrestling in the future.