Skip to content
You are here
HOME PAGE > 01 FEATURED > UK VB: No. 5 Kentucky Falls In Five Sets at South Carolina 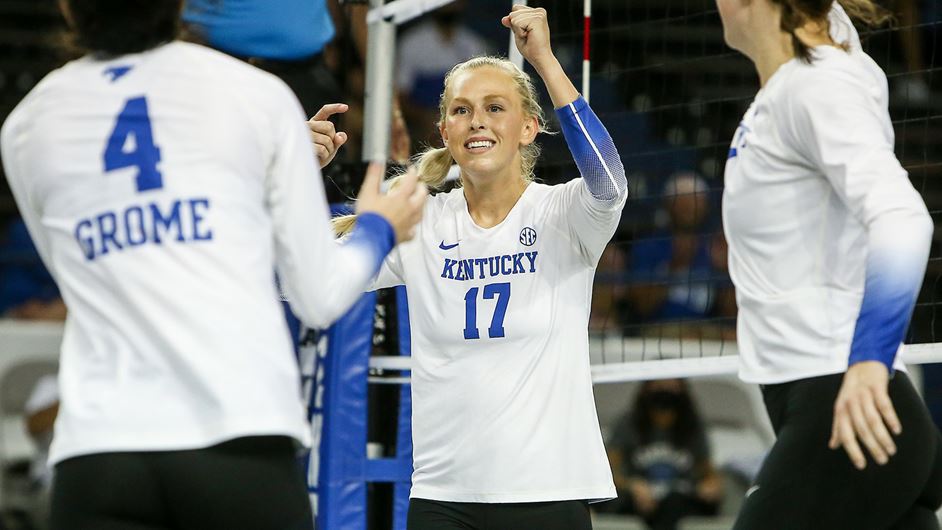 Second match of the series is Friday night at 7 p.m. ET

With the loss, Kentucky falls to 9-1 in SEC play this season and is now 16-4 on the year. South Carolina improves to 13-10 on the season and is now 5-8 in league play. The second match of the series will be Friday night at 7 p.m. ET from the Carolina Volleyball Center.

The loss was UK’s second this season in five sets, and the Wildcats are now 4-2 in five-set matches.

Kentucky got 21 kills from senior outside hitter Alli Stumler to lead all players in the match, followed by 19 terminations from both Madi Skinner and Reagan Rutherford. UK hit an impressive .345 for the match, but South Carolina made bigger defensive plays down the stretch to close out the match.

Emma Grome had a new career-high 63 assists in Thursday’s match, with eight digs and a pair of blocks. UK had eight blocks in the match as a team paced by four from Azhani Tealer to go along with her nine kills and three digs.

The Wildcats retain first place in the SEC, but its lead has now been reduced to one match, as Florida (9-2) and Mississippi State (9-2) are toed for second, one match behind UK with six matches to play in the season.

South Carolina came out of the gates strong with a quick 4-1 lead, and a lead that was extended to four at 8-4 before the Wildcats balanced themselves and climbed back into the set. UK went on a 4-0 run into the media timeout of the first half that was punctuated by a block from Azhani Tealer and Alli Stumler to give UK its first lead of the match at 15-13. South Carolina successfully won two challenges to take the lead into the final stanza of the set, leading 23-22 and Kentucky called its first halt to play trailing by a point after the sideout by USC. Out of the timeout, Kentucky won back-to-back points with a Gamecock service error followed by an over dump from Bella Bell at the net to push Kentucky to the lead at 24-23 and give the Wildcats their first set point. South Carolina followed by winning the next two points on sloppy play by Kentucky as USC arrived at set point, 25-24 and Kentucky called its final timeout. Out of the timeout, UK was out of system on set point and couldn’t get the defensive stop as USC took the opening set, 26-24. UK hit .375 in the set but USC hit over .400 and was led by seven kills from Kyla Manning. Madi Skinner had five kills to lead all Wildcats, followed by four from Stumler.

South Carolina again started the second set strong, taking a three-point lead in the early points, again forcing the Wildcats to chip away at the Gamecock edge. A huge kill from Skinner on the right pin led Kentucky into a 4-0 run thanks to the impressive serving of Lauren Tharp and the USC lead was erased as UK took a 15-14 lead into the media timeout of the second set. Out of the timeout, a nice play by Eleanor Beavin on her sixth dig led to an Azhani Tealer kill and UK had its first multi-point lead of the set at 16-14. After Tealer’s second successive kill, USC called its first timeout, trailing a set-high three points at 17-14 with UK on a 6-0 run. The run extended to 9-0 as Tealer and Stumler again teamed up on the right side for a pair of blocks and South Carolina called its final timeout with UK leading, 20-14. A net by the Gamecocks ended the set, with Kentucky’s 11-0 run midway through proving to be the difference in a 25-17 win.

Reagan Rutherford took the early control of the third set for Kentucky, leading UK out to a 10-4 lead behing three early kills from the sophomore. Rutherford’s ninth kill of the match with a .692 hitting percentage in the match to that point pushed USC into a timeout down six in the early points of the third frame. Rutherford ended the set with seven kills as she just dominated the entire frame from start to finish and guided the Wildcats to a 25-13 second-set victory, its largest margin of victory in an SEC set this season. USC only won more than two points in a row once during the set and Kentucky’s largest run of points was two separate 4-0 runs.

South Carolina responded well to dropping back-to-back sets in the fourth, taking a commanding 13-8 lead in the fourth and pushing Kentucky into an early timeout to talk things over. USC was hitting .375 in the fourth set at that point, but it was the UK offense that was the story, struggling at .075 with four errors through the first 21 points of the frame. The five-point lead for USC was its largest of the match in any set to that point in the match, leading 13-8. Kentucky fell even further behind in the fourth, trailing 20-13 and called its final timeout down by seven. UK closed the gap to as few as three points at 20-17 and 23-20, but the Gamecocks won the final two points to close out the set 25-20 and force the match to a fifth set.

Trailing 6-3, Maddie Berezowitz helped spur the first push for Kentucky in the fifth set, as she aced the Gamecocks and then followed that up with a block from Madi Skinner to tie the frame at six all. Off the 3-0 UK run, the Gamecocks won two points in a row on pin attacks and the media timeout score was 8-6, USC. Kentucky tied the set at 11-11 on an Alli Stumler kill from the left pin and after that point to square the fifth, South Carolina called its first timeout of the set with each team four points from the win. Out of the timeout, USC won back-to-back-to-back points to make it 14-11 and Kentucky called its final timeout on successive points to try and stop the bleeding. A net call ended the match.