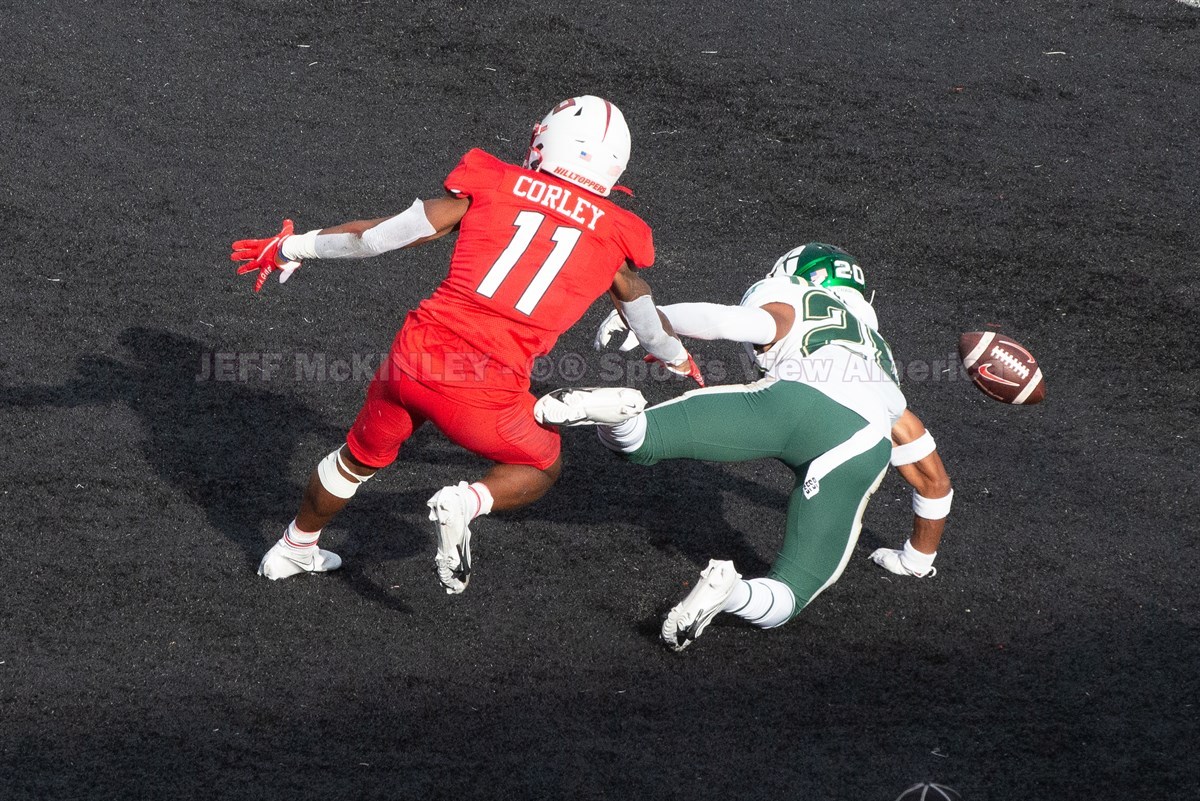 While Charlotte brings a better record (4-3) into the game they will have their hands full with the Tops(3-4) and their high octane passing game.  Grad transfer Bailey Zappe is averaging 428.6yards per game.  He throws @ 71.4% completion, 29 TD’s to only for INT’s. Charlotte is starting backup James Foster for the injured Chris Reynolds.  Reynolds before injury was already Charlotte’s all time career passer, and had thrown a TD in 12 consecutive games.

Today’s weather is probably going to put a damper on the homecoming crowd.  Cool and misty rain isn’t the best place to be in the “Open air” press box. While this is this writers first trip to Houchens Industries-L.T Smith Stadium its a very nice facility smack dab in the middle of campus with a nice Greenspace/tailgating area across the street from the open end zone.

Charlotte took the ball first but went three and out.  Punting into the wind the Toppers ran the short  kick back to the Charlotte 43.  Zappe connected with Davis in the corner of the end zone for the TD with 11:44 remaining in the first quarter.  On the touchdown play Charlotte was flagged for a roughing the passer(more like a love tap) penalty.

Charlotte moved the ball really well between the 25’s but had to settle for a Jonathon Cruz field goal. Then on the insuing Topper drive Zappe threw just his 5th pick of the season. Foster for the 49’s returned the  favor on a fourth and four play at approximately the the 30 yard line.

Aided by two pass interference call on the drive Zappe walks in from the two yard line to get the rushing TD. Toppers up 14-3 with 1:21 to go in the first stanza. And the score stays the same at the end of the period.

With 13:09 to go in the second quarter its becoming a blowout!! 21-3 and the 49’s don’t have an answer for the pinpoint accuracy of Bailey Zappe.  The dude can really thread the needle!!!

With 3:06 to play in the second quarter Charlotte’s Jonathon Cruz nails a 56 yard field goal to make it a game again at 21-13 Toppers.

With 12:34 to go in the third period Western Kentucky had their first punt of the game.

So far the only other excitement in the third period was a batted down pass when Charlotte attempted a fourth and 2 from the 31 yard line.

Through three quarters the only thing slowing down the Western offense is themselves. Multiple penalties and a few running plays just to keep the defense honest.

With all said and done The Charlotte 49’s were no match for the Big Red Machine tonight!! The homecoming crowd was announced as over 16,000.  With this being Halloween weekend i think about 6 or 7,000 of those might be Ghosts!!!

Western Kentucky lit up Charlotte for 483 total yards, including two turnovers and 7 penalties for 50 negative yards.

Tyson Helton seems to really be building a program up on the hill.