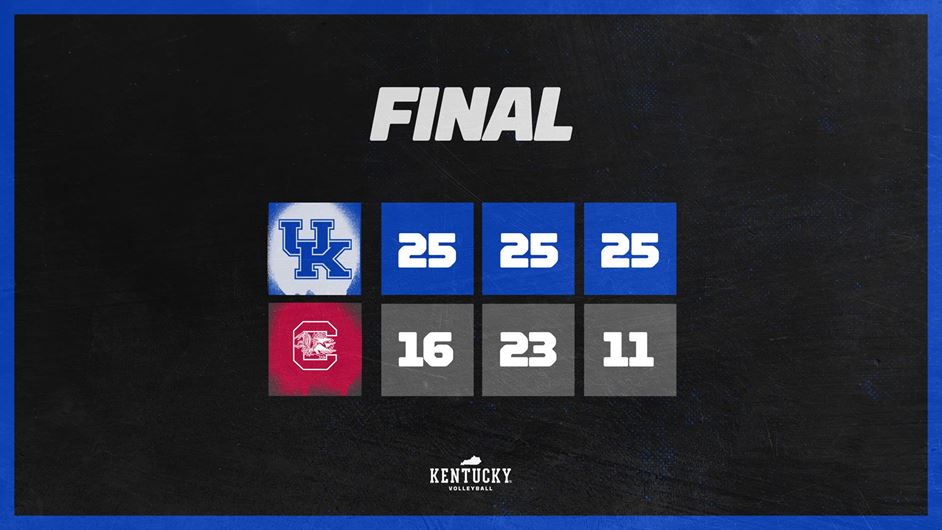 Kentucky keeps alive its one-match lead in the Southeastern Conference as it improves to 10-1 on the year in league play and now stands at 17-4 overall on the year. The Gamecocks fall to 5-9 in SEC play with Friday night’s loss.

In addition to Tealer’s 11 kills, Alli Stumler also logged double-figure scoring for the Wildcats with 10 kills and five digs in the match. Madi Skinner had eight kills, including three in the final set to go along with three blocks.

Freshman setter Emma Grome backed up her career-high 63 kills Thursday night with another solid night, recording 36 assists and four digs with a pair of kills, as well.

At the net, it was Tealer’s five blocks that carried the day for UK as part of a nine-block match for the Kentucky defense. Stumler, Skinner, Reagan Rutherford and Bella Bell all had two-plus blocks in the match for Kentucky as it held a decided advantage.

Eleanor Beavin tallied up 11 digs Friday night, marking another match this season in which the freshman libero has recorded double-digits. The Louisville, Kentucky native also had five assists and one of three Kentucky service aces.

Kentucky will play three matches next week, beginning with a Wednesday night showcase against the Georgia Bulldogs at 6 p.m. ET live on ESPNU. Courtney Lyle and USA head coach Karch Kirlay will have the call for the Worldwide Leader on Wednesday in Memorial Coliseum. Tickets are available for the match at UKathletics.com/tickets or walk-up purchases are available Wednesday at the match.

The Wildcats came out flying out of the gates to the tune of a 9-3 lead and following an Alli Stumler ace the Gamecocks called their first timeout of the match inside the first 12 points with UK leading by half a dozen. South Carolina cut the lead to two at 10-8 after the Gamecocks ran off six of seven points, but a 3-0 run later in the set pushed Kentucky into an 18-12 lead and USC called its final timeout down by six after Azhani Tealer’s third kill of the match on an extended rally. Kentucky’s lead ballooned to a set-high eight points on a 5-0 Lauren Tharp service run at 20-12 and UK saw out the rest of the opener with ease, 25-16. Kentucky held USC to .036 hitting with four kills each from Tealer and Rutherford to co-lead the Wildcats offensively, who hit .231 thanks to nine assists from freshman setter Emma Grome.

Momentum from the first set for Kentucky was quickly erased in the start of the second set by the Gamecocks, who jetted out to a 9-5 lead and Kentucky called its first timeout trailing by four. Out of the timeout, Kentucky’s Emma Grome went on a 5-0 service run to put Kentucky into the lead for the first time all set at 11-10 thanks to a Madi Skinner donut termination from the left pin. Kentucky then went on a 3-0 run to re-take the lead following a service ace from Eleanor Beavin and a Gamecock attack error as the Wildcats led 16-15 and USC called its first timeout of the frame. There was no two-point lead in the set the rest of the way until back-to-back attack errors by UK pushed South Carolina into a 23-21 lead and Kentucky called its final timeout. Out of the Kentucky timeout, UK scored on back-to-back kills to tie the set at 23-23 and the Gamecocks responded by burning their final timeout. Kentucky then got back-to-back blocks from sophomore outside Reagan Rutherford to close the set, 25-23, winning the final four points of the frame in a row.

After dropping the first two points, Kentucky ran off eight of the next nine in its favor to take an 8-3 lead and push the Gamecocks into their first timeout of the set. Azhani Tealer had a kill from the middle to up her total in the match to 10, as she was swinging at a .672 clip on 13 swings to lead all players in the match in both categories. Alli Stumler’s 10th kill came from the back row to force the Gamecocks into their final timeout as Kentucky’s lead was 12-4 on Stumler’s service run. The lead extended to 21-7 after an unsuccessful Gamecock challenge and Erin Lamb and Sophie Fischer checked into the match for Kentucky. The Wildcats got fresh faces into the match to close things out as a kill from Sophie Fischer on the right side brought up match point and an Elise Goetzinger kill out of the middle ended the match as Kentucky closed the set, 25-11.