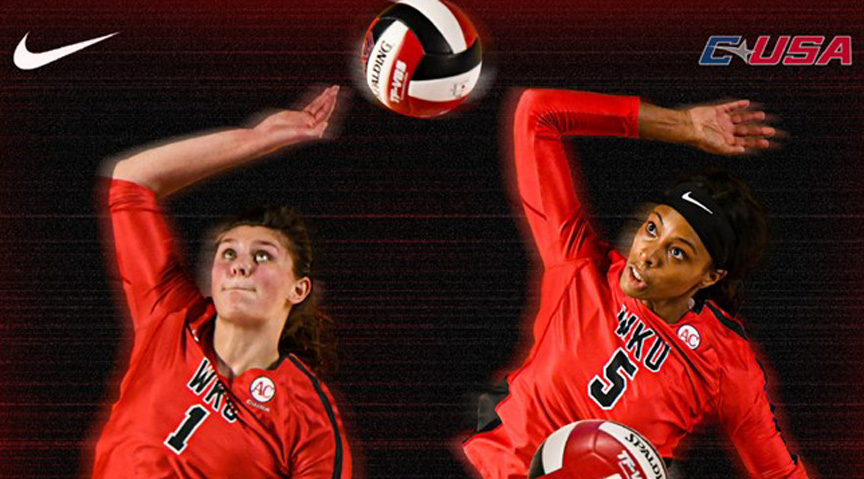 CHARLOTTE, N.C. – WKU junior Avri Davis came off the bench and would tally a career-high 14 kills to help the Hilltoppers to a four-set win at Charlotte. No. 17 WKU saw Matthews go off for 22 kills while Logan Kael racked up 20 digs for the Hilltopper defense. The Red and White worked at a .329 hitting clip while Nadia Dieudonne tallied 55 assists.

WKU is 65-2 across the 2021 calendar year and 78-4 across the last three seasons since the Hilltoppers six seniors have all been on The Hill. WKU improved to 23-1 on the season with Friday’s win along with an 11-0 mark in Conference USA.

Since joining Conference USA prior to the 2014 season, WKU Volleyball has won seven of eight possible regular season titles and six of seven possible tournament championships. Combined, the Hilltoppers has claimed 13 of 15 possible volleyball championships.

WKU scored the opening point of Friday night’s match off a Kayland Jackson kill before the 49ers took a 4-2 lead. The Hilltoppers would battle to tie things back up at 6-6 before a 3-0 Charlotte run would give the hosts the lead for good. In total, the set would feature four ties and five lead changes.  WKU was held to a .238 hitting percentage in the frame as the 49ers would take the opening set, 25-20.

A Lauren Matthews kill opened the scoring in set two before a solo block from the middle hitter knotted the score at 2-2. WKU worked ahead to an 8-5 lead, forcing a 49ers’ timeout before pushing ahead to 13-6. Charlotte took its final timeout trailing 17-9 and the Hilltoppers would lead as much as 19-10. UNCC would fight back within four at 22-18 before WKU evened the match at 1-1 with the 25-19 second-set victory.

Jackson opened third-set action with a kill before the Hilltoppers ran out to a 12-5 lead to force the 49ers’ first timeout. A 4-0 run later, WKU’s lead was out to 16-5 to force Charlotte’s final timeout. While the hosts again battled back, making their way into double digits, WKU ran away with the set, 25-14. The Hilltopper defense racked up a match-best 23 digs in the frame while holding Charlotte to a .083 rate.

Avri Davis continued her career night by opening set four with a kill. Kelsey Brangers would serve the Hilltoppers out to a 3-0 lead. WKU worked into double digits first, leading 10-7 and then 13-7 for a Charlotte timeout. The Tops’ lead grew to seven at 14-7 following a block assist from Katie Isenbarger and Davis. The 49ers battled back within four at 19-15 but a 6-0 run off Brangers’ serve would push WKU to a 25-15 decision.

Briggs racked up 16 digs to go along with eight kills, two aces, a block and an assist on the night. Jackson also tallied eight kills, as well as three blocks.

WKU registered 71 digs to Charlotte’s 58 and held the 49ers to a .186 hitting clip, well below their season average.

NEXT UP
The Hilltoppers will close their series at Charlotte on Sunday with an 11 a.m. CT first serve against the 49ers. It’ll also be the Senior Day for three Charlotte players.