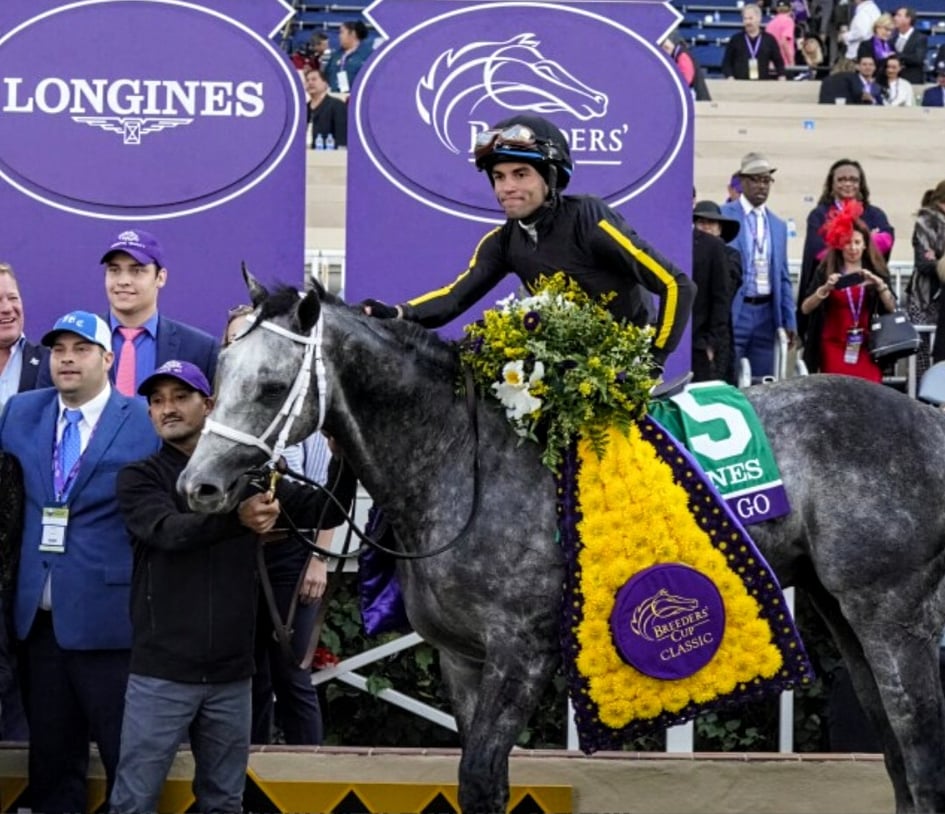 Del Mar is the most picturesque race course in America. With the waves of the Pacific Ocean crashing in the background, palm trees adorning the paddock, and perfect weather, what could possibly go wrong?

For some, it was the best of the best. The Japanese contingency finally broke their fairly significant losing streak in Breeders’ Cup races with the five-year-old mare Loves Only You in the Grade 1 Filly & Mare Turf. They were moved to tears. A short time later, they also won the Grade 1 Distaff in huge upset with Marche Lorraine. I feel certain the entire group is still in shock. Bettors, including yours truly, were flabbergasted.
Trainer Wesley Ward had an outstanding weekend, winning the Grade 2 Juvenile Turf Sprint on Friday with Twilight Gleaming, and the Grade 1 Sprint for older horses on Saturday with Golden Pal. Ward says Golden Pal is the best horse he has ever trained. The three-year-old son of Uncle Mo absolutely destroyed his competition.  Jockey Irad Oritz, Jr. was up for both victories and gave a emotional tribute to fallen jockey Miguel Mena in the winner’s circle.
Trainer Steve Asmussen, who had recently experienced a slump, got a win on Friday in the Grade 1 Juvenile Fillies with his undefeated daughter of Gun Runner, Echo Zulu. If she stays sound and in this form she will be wearing lilies on Kentucky Oaks Day. Wow, what an impressive young runner!
Bobby Flay and trainer Christophe Clement teamed up to give Clement his first ever Breeders Cup win in the Grade 1 Juvenile Fillies Turf with Pizza Bianca. Both trainer and owner were ecstatic, but the spotlight belonged to jockey Jose Ortiz. That may have been the finest ride I have seen in a Breeders’ Cup race this decade. Jose Ortiz should receive complimentary meals for life in all of Bobby Flay’s eateries!!

Hall of Fame trainer Todd Pletcher got his Breeders’ Cup win with Life is Good. Formerly trained by Bob Baffert, the Into Mischief colt schooled his competition in the Grade 1 Dirt Mile. With five wins from only six lifetime starts, this three-year-old colt is nothing short of spectacular. He literally goes to the lead and runs them off their feet.
Not surprisingly, Bob Baffert got his day in the sun when Corniche dominated the Grade 1 Juvenile. Most fans believed Baffert’s stable should not have been allowed to participate in the event. But, in his home state, with many of his former and current clients on the California Racing Board, he showed up and attempted to repair his tarnished image. Corniche is a potential superstar. So, we shall see if he remains in Baffert’s stable, given the fact that Baffert is banned from the Kentucky Derby next spring.
In the Grade 1 $6,000,000 Classic, Louisville trainer Brad Cox had the two favorites. Knicks Go finished first and Essential Quality was third. Not a bad day for a young man who grew up within walking distance of Churchill Downs. Knicks Go was uncatchable and unbeatable, covering the mile and a quarter distance in just under two minutes. He is Horse of the Year…no question.
Finally, a word about European trainer Charlie Appleby. He won both races he entered on Saturday for Godolphin Racing. Space Blues took the Grade 1 Mile and Yibir won the Grade 1Turf. As we know, Sheikh Maktoum certainly needed the money, so we are all ecstatic for him. FYI…that was sarcasm.
Sounds like a great time, right? Not so fast.
There were several defeats over the course of the two-day event that left racing fans shaking their heads. On Friday, in the very first Breeders’ Cup race,  the undefeated filly, Averly Jane, was trounced by her competition.
Likewise on Saturday, two heavy favorites were soundly beaten. Baffert’s near perfect runner, Gamine, and Steve Asmussen’s star, Jackie’s Warrior, turned in perhaps the worst performances of their lives.
However strange these huge losses might have seemed, nothing was as bizarre as the final race on Friday. Trainer Charlie Appleby had  two colts in the Grade 1 Juvenile Turf. They were side-by-side in posts one and two. Albahr, in the two hole, became agitated and reared up, went over backwards, and was writhing on the ground underneath the gate. An assistant starter ran around to the front and opened Modern Games’ gate in the one hole to prevent injury to a second horse. The vet behind the gate thought Modern Games had broken though the gate and called in an automatic vet scratch to the stewards. So, both Charlie Appleby runners were out. Or so we thought. Once the information was relayed to the vet team that Modern Games had not broken though the gate and was fine, he was allowed to run for purse money only. And, he won! Sounds like a happy ending to what could have been a terrible situation, right? Again, not so fast.
Trainer Kenny McPeek, who has never won a Breeders’ Cup race, had the second place finisher in Tiz the Bomb. So, as far as the wagering pool was concerned, McPeek had the winner. But Charlie Appleby and Modern Games got the trophy and the winning percentage of a million dollars. It was an all-around debacle, and left many bettors and fans outraged going into Saturday.
McPeek tweeted that it could only happen to him. He remains winless in Breeders’ Cup action.
In closing, let me say that I could not have turned in a worse performance as a bettor, myself. Dismal is kind. Horrific is more accurate. My husband, Gary, was equally pathetic. Needless to say, there was no celebration at The Roedemeier Ranch over the weekend. I was live in the pick-5 to Modern Games, and we know how that turned out.
Many of us must dust ourselves off now, and return to fight another day in the game we love. Life is short. And, Kentucky Derby is only six months away!!!