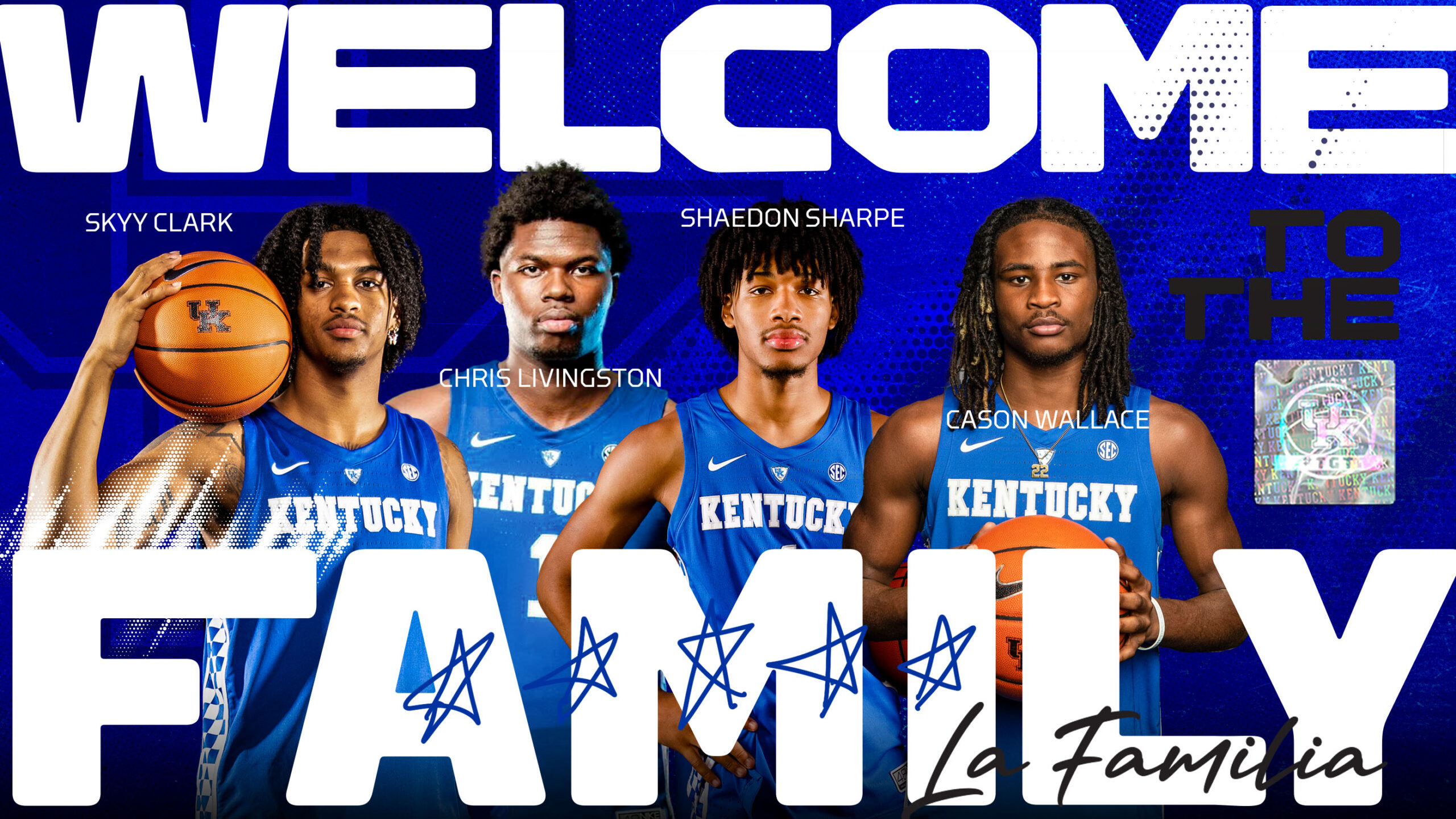 LEXINGTON, Ky. – Even by John Calipari era standards, the Kentucky men’s basketball team’s 2022 signing class is shaping up to be one of the best in school history.

Sharpe will enroll at Kentucky for the 2022 spring semester. Clarke, Livingston and Wallace will join the program for the 2022-23 season.

“I am really excited about this group,” UK head coach John Calipari said. “When you watch these guys play, the talent and upside is obvious, but what stands out to me about all four of them is how much they want this and want to be here. Their mentality and their drive separate them from their peers. They all wanted to play with one another and wanted the challenge of competing against the best every day. Big Blue Nation, I can’t wait for you to meet this group and watch them play.”

With the spring signing period still to go, UK is going to be in the mix for one of the top classes in the nation yet again. Rivals and 247Sports currently rank it as the top haul of the fall with four signees.

In every season but one of the Calipari era, the Wildcats have signed a top-three recruiting class according to the Recruiting Services Consensus Index, which tallies major recruiting rankings and plugs them into a formula to calculate a consensus ranking. With the fall additions, Kentucky has signed 66 top-50 recruits, 52 top-25 players and 28 top-10 players (according to Rivals) in what will now be Calipari’s 14 recruiting classes at Kentucky.

UK can only comment on prospects who have signed official paperwork with the university. 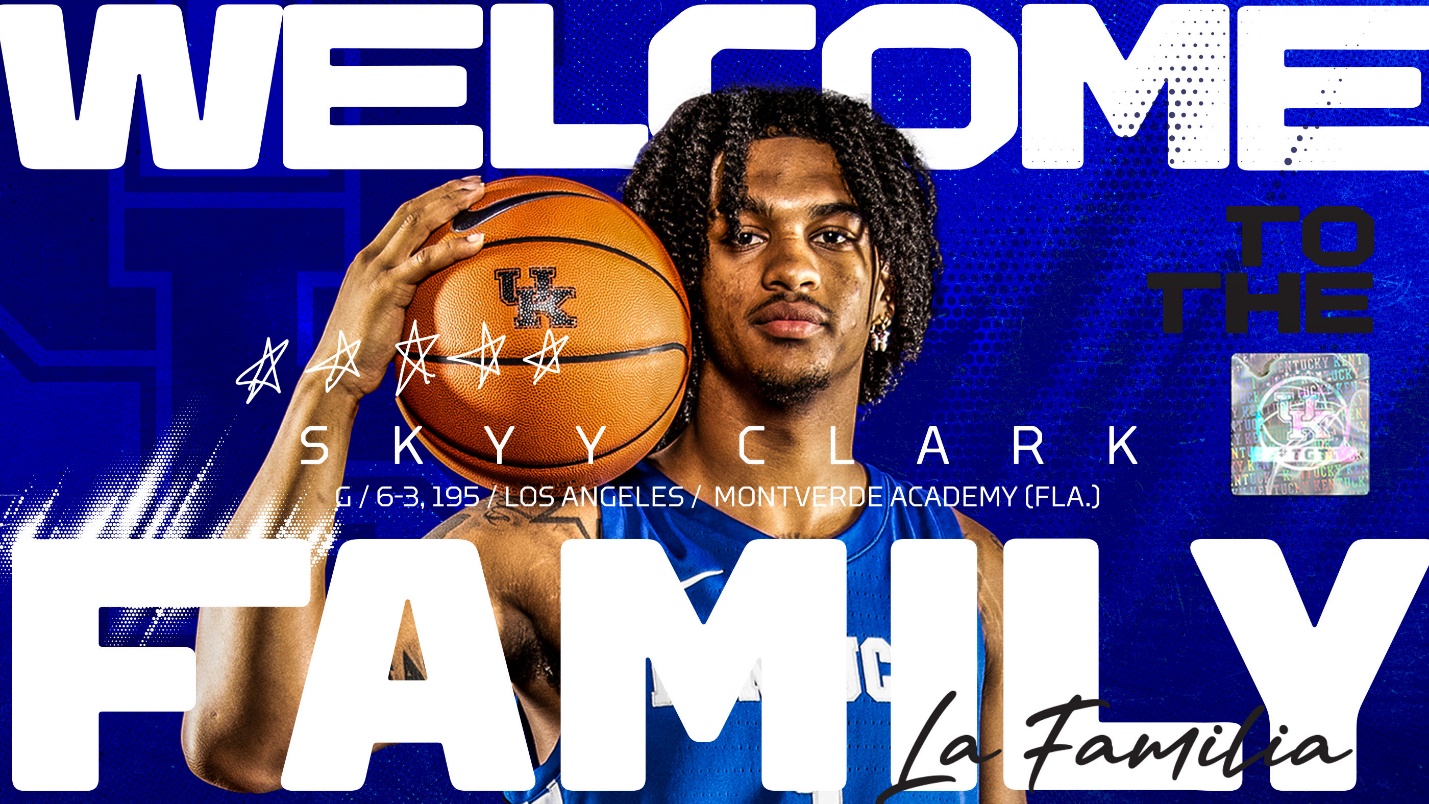 Stats: Averaged 26.4 points, 4.7 rebounds and 3.5 assists in 11 games for Ensworth High School in Nashville, Tennessee, in 2020-21 as a junior before opting out for the remainder of the season due to the COVID-19 pandemic

Notable: First commitment in the 2022 class | Tore his ACL at the beginning of the summer after transferring to Montverde Academy in Florida but is expected to make a full recovery before arriving at Kentucky

Why Kentucky: “Why Kentucky? I chose to come to Kentucky because there’s no better place to be. From the coaching staff, to the culture, to the family, to the fans, there’s nothing like being a part of La Familia.”

Coach Cal: “Skyy was our first commitment in this class and is a tremendous leader. He’s a skilled point guard who can score it, who can pass it and who can create for his teammates. He has the physicality to get on someone and really guard. He is a terrific playmaker who is really going to mesh well with this group.” 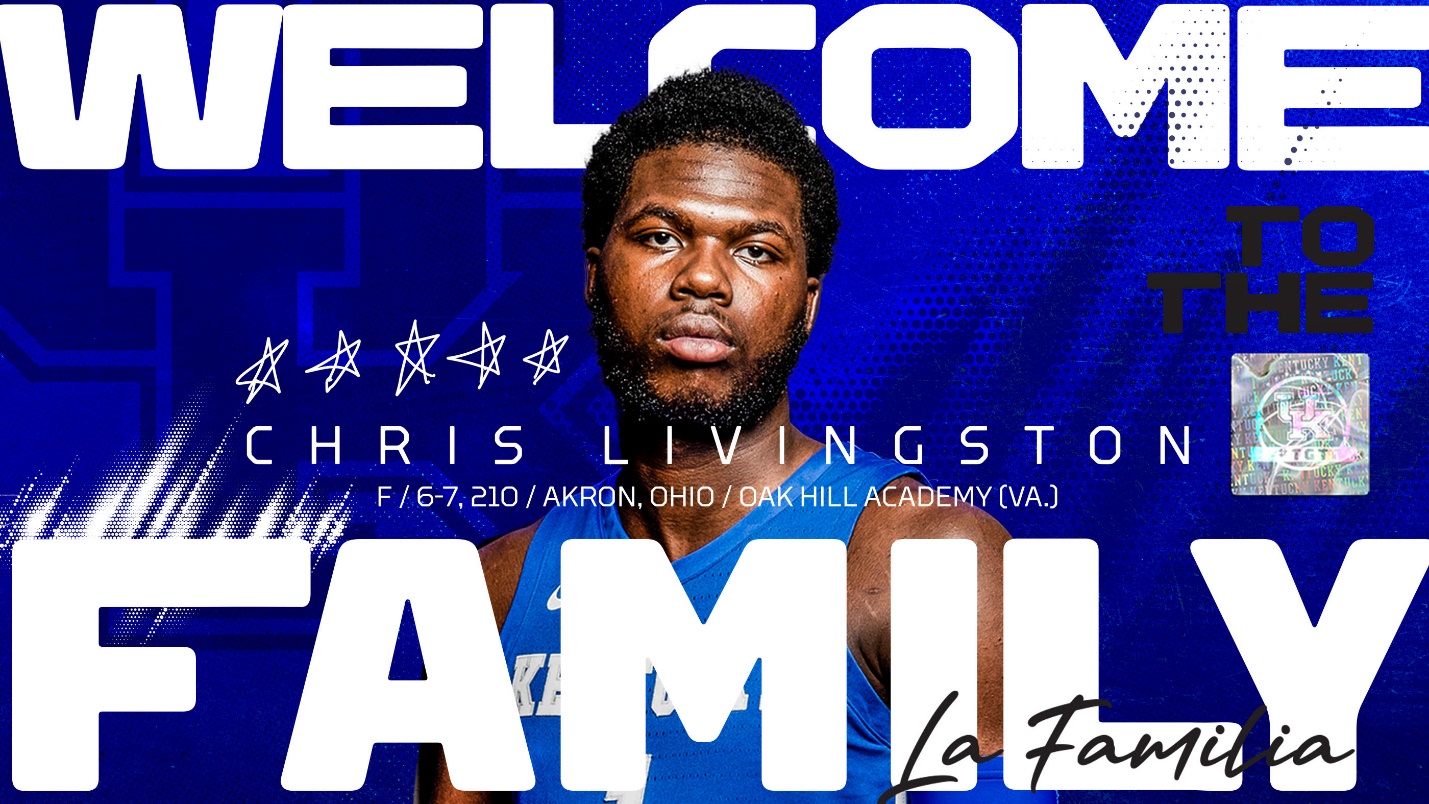 Notable: 2021 Gatorade Ohio Player of the Year and MaxPreps Junior All-America First Team | Named MVP of the 2019 FIBA Americans U16 Championship after leading Team USA to a gold medal while averaging 14.8 points and 8.0 rebounds | Transferred to Oak Hill Academy in Virginia after his junior season

Why Kentucky: “I chose to come to Kentucky to become the best version of myself on and off the court.”

Coach Cal: “Chris has everything that you look for in a wing: athleticism, speed, skill and a physicality to him. He can play and guard multiple positions and he can score the ball at all levels, but he can also impose himself physically on both ends of the floor. Chris can really be a challenge for opposing defenses.” 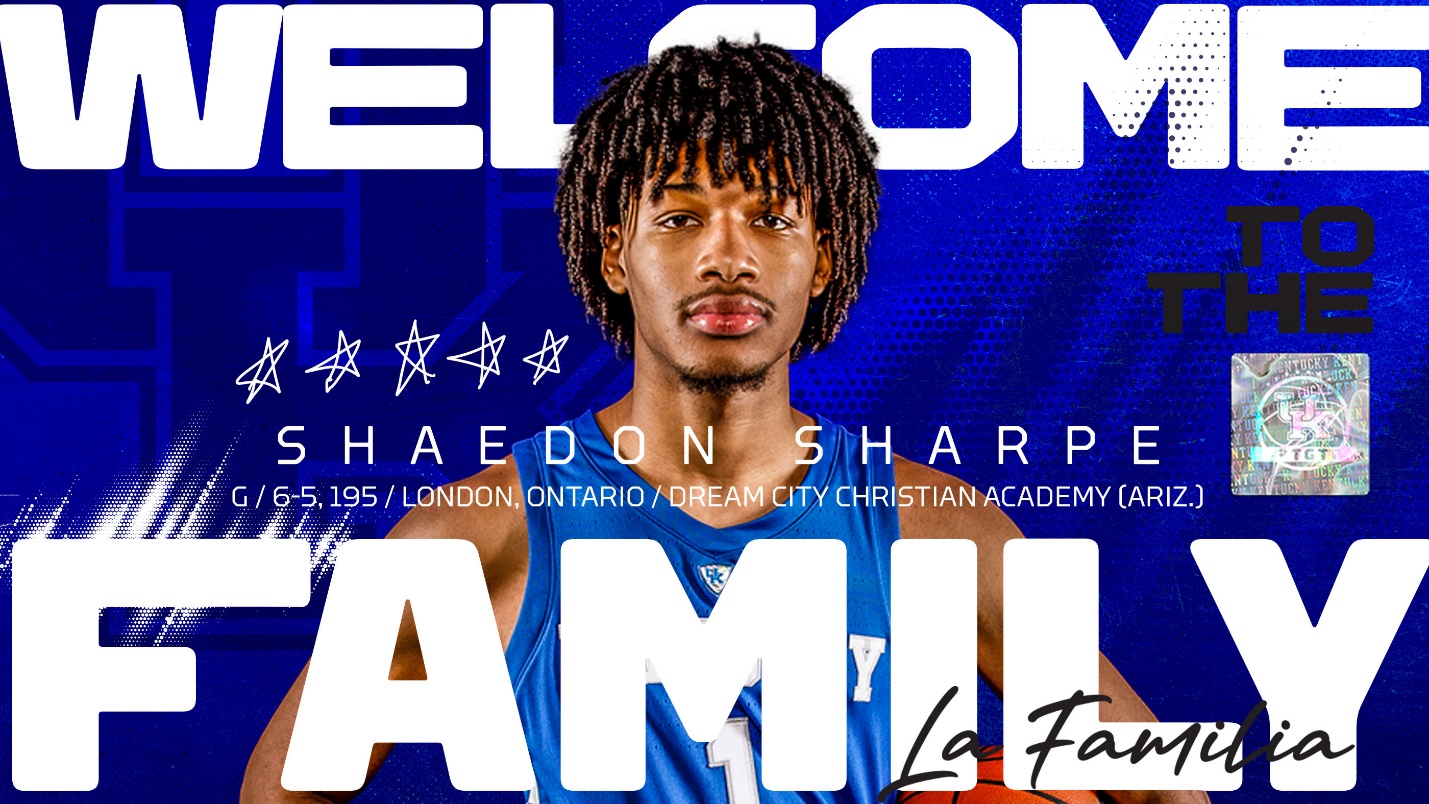 Notable: If the rankings hold, would be the first consensus No. 1 prospect to sign with Kentucky since Nerlens Noel in 2012

Why Kentucky: “I just felt like Kentucky was the best fit for my playing style and the way I play. Kentucky also feels a lot like home, so it wasn’t hard picking this school. The history that Kentucky has had with guards is just amazing.”

Coach Cal: “Shaedon has the ability to be one of those guys that we’ve had make a special impact on this program. He is an elite scorer with a ton of upside. He’s a 6-5 athlete who I would describe as bouncy. What I love about Shaedon is the work he has put in over the last year to take his game to the next level. I look forward to seeing that work ethic take on a new challenge at Kentucky.” 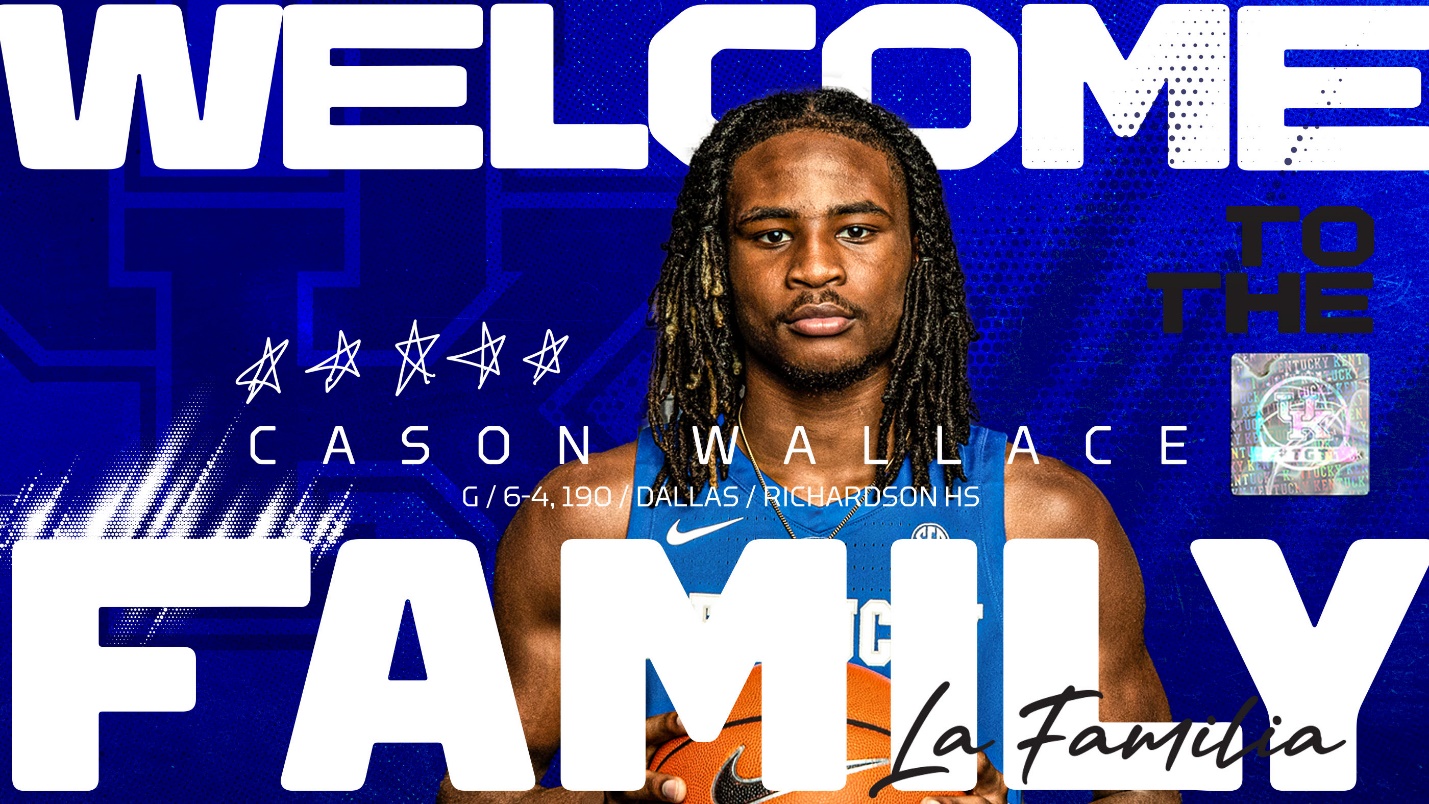 Why Kentucky: “I chose Kentucky because Coach Cal has shown the ability to get players like me to where I want to go with hard work. I understand that it will be hard and I wanted to bet on myself.”

Coach Cal: “Cason is a winner and a competitor who reminds me of Eric Bledsoe and Shai Gilgeous-Alexander. I don’t like to make a lot of comparisons like that, but he has a quiet demeanor with a game that speaks loudly. He can shoot it and create for his teammates, but what really separates him is his defense. He is already an elite on-ball defender who takes a lot of pride in that part of the game.”