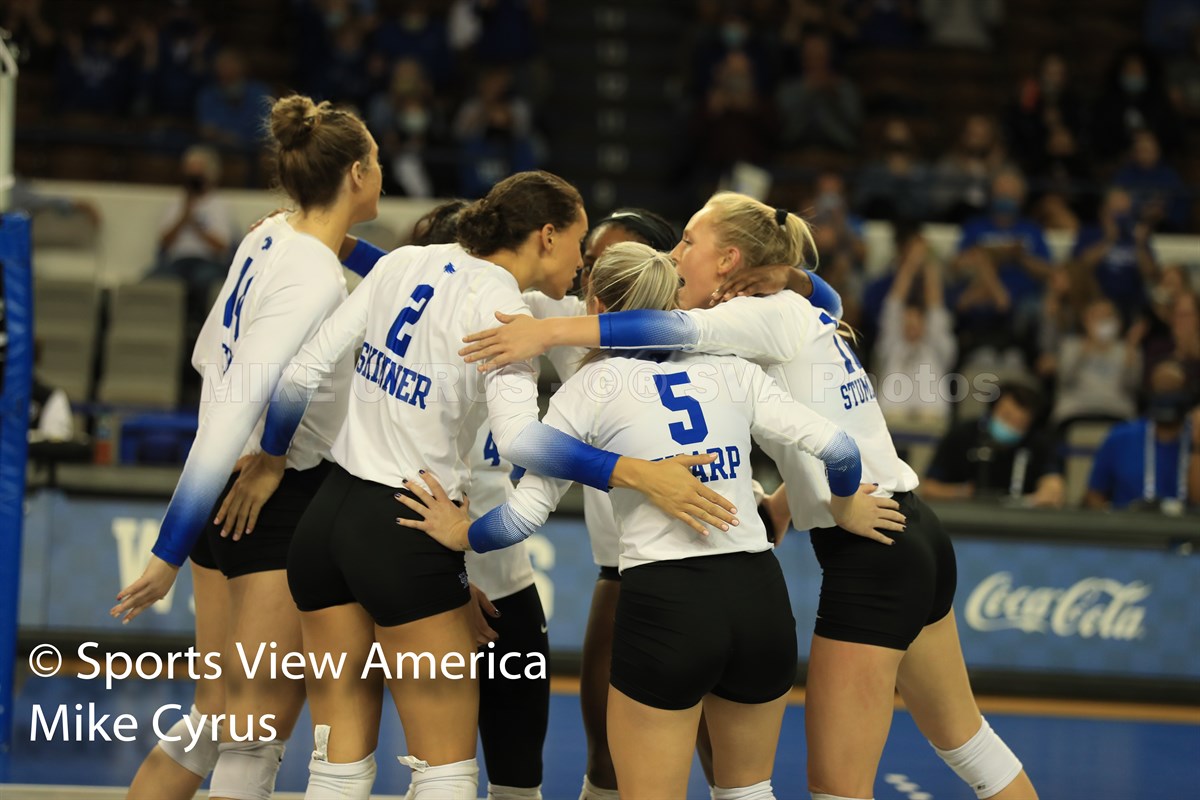 UK hit a monstrous .416 as a team Wednesday night, with all attackers hitting above .250 and registering five players who hit above .300 on one of the most clinical offensive nights of the season for Kentucky.

Emma Grome ran the Kentucky offense to the .416 clip with 39 assists in the match to go alongside eight digs and a block. Grome, one of the most talented freshmen in the country, is averaging 11.4 assists per set, good enough for sixth in the nation, and the most for any freshman setter in the country.

Defensively, it was a clinic for the Wildcats, who held Georgia to a .111 hitting percentage, hitting for a negative percentage in the first set and never hitting above .200 in any set of the match. It was a great night for senior Lauren Tharp, who tied her season-high with 14 digs in the match and set a new SEC-career high with the 14 digs, topping her previous high of 10 vs. Mississippi State in October of this season. Tharp led the team in digs in a match for the first time all season.

Junior middle blocker Azhani Tealer had another sensational night, hitting .500 for the Blue and White with nine kills on 14 swings for a .500 hitting percentage. She also had four blocks and a pair of digs as her season hitting percentage bumped up to .440 and she’s averaging 2.69 kills per set.

With Wednesday night’s result, Kentucky collects its sixth sweep in conference matches and improves to 11-1 this season. The Wildcats are 18-4 overall. Georgia falls to 8-15 and 4-8 in SEC action.

Kentucky’s longest homestand of the season in SEC play continues this weekend as it welcomes the Texas A&M Aggies to Lexington for a two-match series Saturday and Sunday. Saturday’s match will be at 4 p.m. ET on the SEC Network, followed by a Sunday showdown at 2 p.m. ET on the SEC Network with Paul Sunderland and former Penn State All-American Salima Rockwell on the call.

Thanks to a quick start defensively by Lauren Tharp and Riah Walker, Kentucky jetted out to a 10-3 lead and Georgia elected to call a timeout to stop the bleeding, down seven. At that point, it was the attacking of Azhani Tealer and Alli Stumler dominating the match, who both had three kills in the early points to start the match. A pair of Bella Bell stuffs brought Kentucky’s lead up to 16-7 and after an ace by Eleanor Beavin, Georgia called a timeout trailing 17-7. Kentucky raced to a 25-10 win behind six kills from Alli Stumler, hitting .481 on the set by also holding Georgia to a -.032 hitting percentage with only two blocks. Kentucky had four blocks in the match with a pair of blocks from three different players including Tealer, Madi Skinner and Bell.

Kentucky was again quick to jump out to an early lead in the second set, leading 10-5 after an extended-rally kill form Madi Skinner to double up the Bulldogs. Georgia called its first timeout trailing by five and Kentucky would head to the huddle hitting .500 in the set on its 10 attacks so far to that point in the set. Kentucky’s lead grew to six at 14-8 off a termination from Alli Stumler on the left pin, her eighth of the night to lead all players in the match at that time. Kentucky ran away with the second set, closing the frame on a 5-0 run and taking the 2-0 lead with a clinical and convincing 25-14 win.

It was a quick six-point lead for Kentucky in the third set, as the Wildcats led 10-4 in the early stanzas of the third to put the Bulldogs on their heels. UGA cut the lead to one, as the Bulldogs went on a match-best 6-1 run to pull to within 11-10. Kentucky responded well by running off three points in a row to make it 14-10 as the Bulldogs called a timeout down four. Kentucky’s lead ballooned to 17-12 on a 3-0 run punctuated by an Azhani Tealer kill. The Wildcats then finished the match on a 3-0 run and a Bulldog attack error ended the match with Kentucky taking the third, 25-18.