Skip to content
You are here
HOME PAGE > 01 FEATURED > Whispering About the Wildcats – Oscar Tshiebwe Leads Cats to Victory Over Mount St. Mary’s 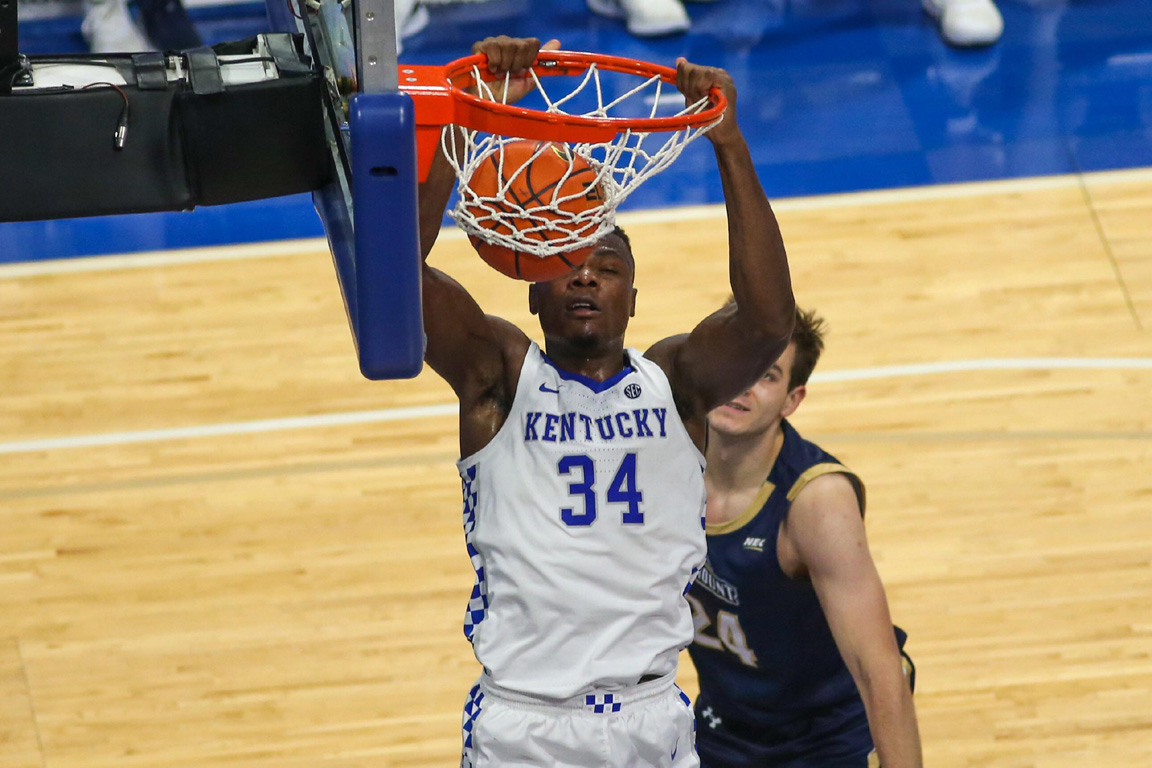 Lexington, KY 11-16-21 – The Wildcats took to the Rupp Arena floor to play against the Mountaineers of Mount St. Mary’s after the impressive win against Robert Morris Friday night. The series now stands at 3-0 after the Cats defeated the Mountaineers 80 to 55. It was another great performance by Oscar Tshiebwe who showed the fans that he has a jump shot. Tshiebwe scored 24 points and grabbed 16 rebounds and is quickly becoming a fan favorite.

Sahvir Wheeler continues to impress and is the point guard that the Wildcats were missing last season. He ended the game with 12 points and 8 assist while only 1 turnover. Tyty Washington scored 16 points on 7 of 12 shooting.

The Wildcats will take on Ohio on Friday November 19th at 7pm on SEC network. Hopefully the Cats will have the whole roster available as Jacob Toppin and Lance Ware did not play in tonight’s game. After the last two games it looks like Kentucky is on the path to making another run in the NCAA Tournament.

The game started with each team trading baskets up to the first TV timeout with the Cats holding a slight 8 to 7 lead over the Mountaineers. Oscar Tshiebwe scored six of the first eight UK points. Mount St. Mary’s scored took the lead briefly 9 to 8, but the Wildcats overtook the Mountaineers and led by 3 with 12:44 to play. The Cats lead continued to grow with Washington and Tshiebwe combining for 19 of UK’s first 21 points. Kentucky’s first double digit lead occurred at the end of the half as the Cats took a 38-27 lead into the locker room at the break.

Oscar Tshiebwe was the halftime MVP with 14 points and 7 rebounds. Tyty Washington was the only other Wildcat with more than four points, he tallied 12 in the first half.

Sahvir Wheeler scored on the opening possession of the second half and dished for an assist on the next offensive trip down the court. Kentucky played amazing defense to open the half and did not allow Mount St. Mary’s to score until the Mountaineers hit a three-pointer with 15:55 left in the game. By then the Wildcat’s had pushed the lead to 51 to 30. Mount St. Mary’s started to look exhausted as the Cats continued to be active on defense and went on an 8-0 run and pushed the lead to 29. Kentucky went on a drought offensively only making 1 of 11 shots making only 2 points in over six minutes. That allowed a 9 points run by the Mountaineers to pull back within 22 points. However, the Wildcat were too much for the Mountaineers, winning 80 to 55.