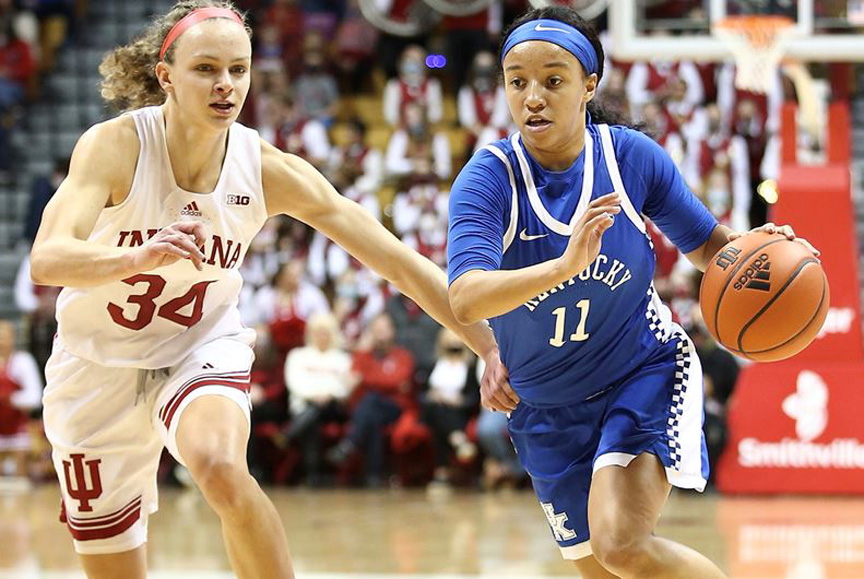 Wildcats are back in action Sunday, Nov. 21 vs. Winthrop at 2 p.m. ET inside Memorial Coliseum

Freshman Jada Walker had a career high 16 points for the Cats and Robyn Benton added 11.

The Cats got on the board first, with free throws from Treasure Hunt and Benton, then a put back by Howard, to grab a 4-0 lead. But Indiana answered with an 11-2 run, with all 11 points being scored by Mackenzie Holmes, to lead 11-6 at the first media timeout.

Indiana would extend the lead to nine, 15-6, before Kentucky got baskets from Walker and Howard to cut it to 15-10. But Indiana would hold a 20-14 lead after one period.

In the second quarter, Indiana would stretch the lead to eight, 22-14, before the Cats responded with five points in a row, three from Walker and two from Howard, to get within three, 22-19.

After three in a row by the Hoosiers, Kentucky mounted another run, sparked by its defense. UK would get two straight baskets from Walker and a jumper from Jazmine Massengill to tie the game at 25-25 with 5:51 to play in the half.

Indiana would twice stretch the lead back to six but Walker cut the lead to three, 35-32, on a layup and free throw with three seconds to play in the half. But IU’s Grace Berger hit a midcourt shot at the buzzer to give the Hoosiers a 38-32 lead at the break.

Kentucky scored the first four points of the second half, on a basket by Dre’una Edwards and a jumper by Howard, to cut the IU lead to two. But Indiana scored the next five, and the stage was set for a back-and-forth third quarter.

IU led by seven when Howard hit a three, but Holmes made a pair of free throws to make it 45-39 IU with 7:57 left in the third. Kentucky would answer with the next five points to get within one, 45-44.

In the fourth, Kentucky would never get closer than 12 points.

After playing three games in six days, the Cats will now be off until next Sunday when they host Winthrop at Memorial Coliseum. Tipoff will be at 2 p.m. ET and the game can be seen on SEC Network Plus.