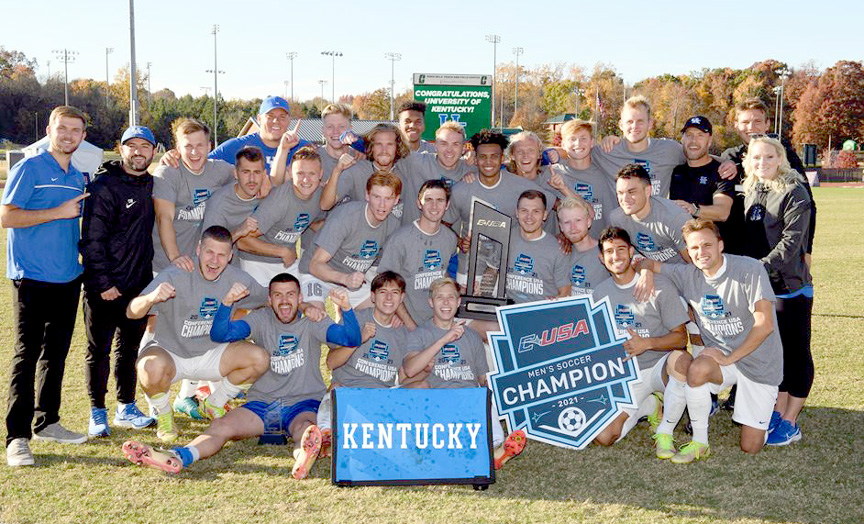 Wildcats earn second C-USA tourney title in program history
CHARLOTTE, N.C. – The Kentucky Wildcats are 2021 Conference USA champions.
Kentucky earned its second C-USA Tournament crown in program history and its 11th overall conference title on Sunday.
The 13-1-4 Wildcats, seeded fourth in the tournament and ranked 15th in the country, defeated sixth-seeded Florida Atlantic (9-6-3) by a score of 2-1 in overtime of the C-USA Championship final at Transamerica Field.
Marcel Meinzer ignited the Cats’ comeback effort with a penalty kick in the second half, while Eythor Bjorgolfsson scored the golden goal just over three minutes into overtime.
Playing in the C-USA Championship final for the first time ever, Florida Atlantic struck first on Sunday with a combination from Pontus Steffensen to Ivan Mykhailenko in the 16th minute.
After a relatively stagnant first half in which each team managed only three shot attempts, Kentucky trailed at the break for the first time all season.
But, momentum swung in the Wildcats’ favor during a second half in which Kentucky ultimately outshot Florida Atlantic 9-1.
Opportunity presented itself in the 60th minute when UK defender Luis Grassow was fouled on a run into the FAU penalty box, setting up Kentucky’s second penalty kick of the season.
Meinzer iced the kick straight down the middle, securing the first-team All-C-USA midfielder’s first goal of his senior campaign.
The score remained in a 1-1 deadlock for the final 30 minutes of regulation.
In overtime, Clay Holstad began the scoring sequence with a dribble to the right corner and an airborne cross in front of the net. Bjorgolfsson couldn’t corral the initial pass, but the unmarked Enzo Mauriz was there to follow it up on the far post.
Mauriz sent the ball back toward the middle on the ground from six yards out, where Bjorgolfsson’s outstretched right leg poked the ball over the head of goalkeeper Neil Strauber.
Bjorgolfsson was named the tournament’s Offensive Most Valuable Player, joined on the All-Tournament Team by Meinzer, Jan Hoffelner and Grassow, the Defensive MVP.
Kentucky earns an automatic bid to the NCAA Championship, where it is scheduled to make its 12th all-time appearance in the 48-team field. The official bracket will be unveiled starting Monday at 1 p.m. ET.
For the latest on the Kentucky men’s soccer team, follow @UKMensSoccer on Twitter, Facebook and Instagram, as well as on the web at UKAthletics.com.
‑ GO CATS –