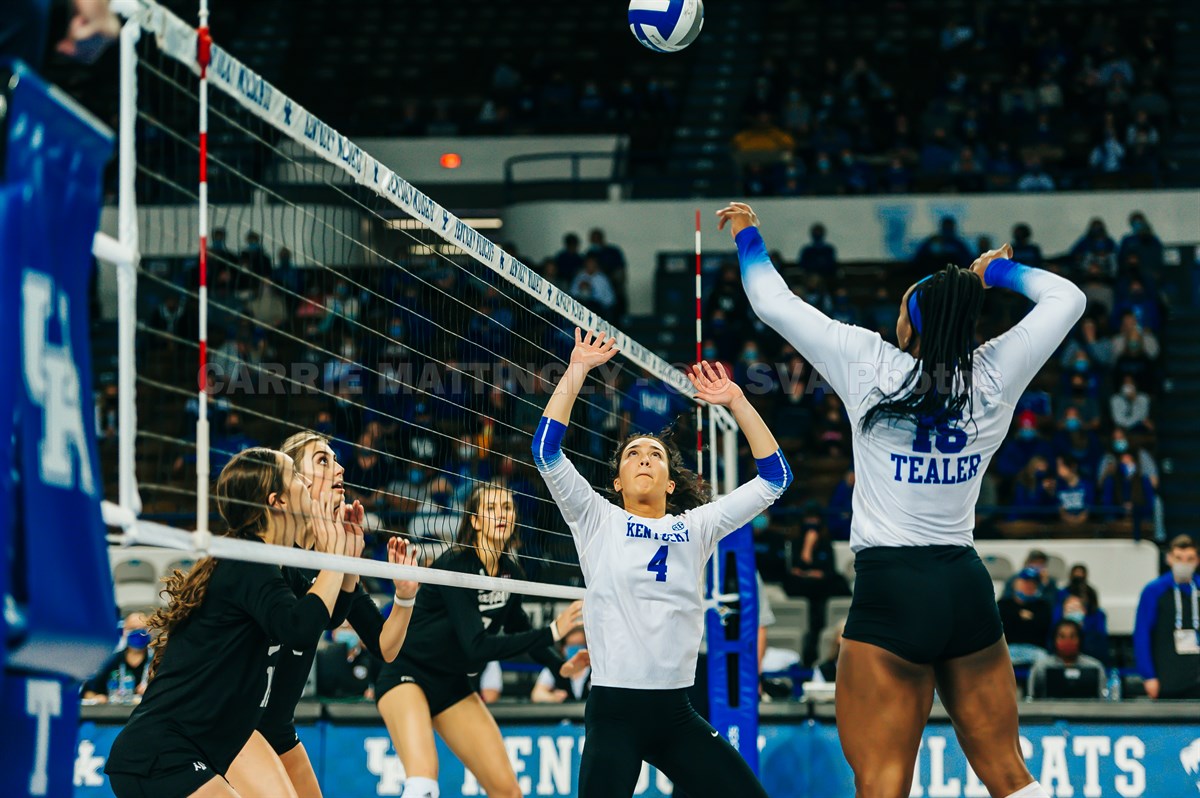 No. 7 Kentucky Uses 12 Blocks to Sweep Texas A&M on Sunday

Bella Bell has nine blocks in sweep of the Aggies

Bella Bell led the blocking effort for the Wildcats as she finished the game with nine total blocks including one solo block.  Bell’s performance is her second highest off the season, one block away from her season high of 10 against Arkansas on Oct. 22. Along with her powerful defense, Bell recorded three kills in the match.

Sophomore Riah Walker was all over the court with eight digs and one assist. Walker had a pair of aces, and was also the key culprit on a 9-0 UK run in the first set at the service line, as her service pressure had Texas A&M out of system for a majority of the afternoon.

Freshman setter Emma Grome also got in on the action as she too recorded eight digs to compliment her 29 assists on the day. Grome, who leads the NCAA’s freshman in assists per set this season, is averaging 11.8 assists per set in SEC play, and UK is the only team in the SEC with a hitting percentage as a team above .300 on the year.

With the final results from the weekend, Kentucky retains a one-match lead in the Southeastern Conference standings, sitting at 13-1 in league play. UK improves to 20-4 overall on the year. Texas A&M falls to 12-12 and 5-9 in the SEC.

Kentucky has a one-match lead with four matches to play. The Wildcats will play a two-match series next weekend on The Plains in Auburn before closing the season Thanksgiving weekend against the second-place and nationally-ranked Florida Gators. Tickets for UK’s season finale against UF are on sale at Ukathletics.com/tickets.

In the first set Texas A&M was the team to strike first, but Alli Stumler was there to make the first kill for the Wildcats and even the set at 1-1. Then play shifted to the right side as Reagan Rutherford had back-to-back kills early. Texas A&M took the momentum as the set continued, going on a 5-0 run ended by a powerful kill from Azhani Tealer. An overpass kill from Madi Skinner and monster block from Bella Bell gave the power back to the Wildcats as they regained the lead 9-8. A successful challenge by the Aggies brought them back within one with the score at 11-10. The Wildcats were able to capitalize on a service error by Texas A&M as they went on a nine-point streak emphasized by huge kills from both Rutherford and Stumler and an ace from Riah Walker forcing an Aggie timeout at 18-10.   The streak continued out of the timeout with two impressive blocks from Bell. A&M was able to find a couple points, but they were no match for Stumler after an illegal contact call against the Aggies and they took their second timeout trailing, 23-12. A sneak dump from Emma Grome sent the Cats to set point, and they won the set with a four-point run on a hitting error by the Aggies, to take the opener, 25-12.

The beginning of the second set was all Wildcats as explosive blocks from Bell, Rutherford, and Stumler kept stuffing Texas A&M’s attack as they dipped below .000 for the first time in the match. Defense was not the Cats’ only source of power as Bell and Stumler nailed kills to get Stumler close to double-digits on the day. Walker was able to continue the Kentucky lead with her second ace of the day and fifth on the weekend series. After another monster block from the Wildcats and a huge kill from Stumler the Aggies took their first timeout at 6-0, UK. Out of the timeout the blocks didn’t stop as Bell and Rutherford combined for another stuff, increasing the Cats run to seven unanswered. Texas A&M was able to get a quick point, but Tealer and Stumler were able to stop any momentum with the Wildcats 10th block of the match.  Stumler continued Kentucky’s powerful serving with an ace of her own. At 13-3, Texas A&M was unsuccessful with its second challenge. Skinner, Tealer, and Rutherford were all able to find the floor for the Cats and increased the lead to 10 at 16-6. Once again, the Bell-Rutherford block dominated the Aggie offense as the Wildcats pushed to the finish line. Another Stumler ace, impressive Skinner kill, and A&M error got Kentucky to set point and took the second set on a big kill by Grome, 25-11.

Neither team had more than a one point lead up until the Wildcats got a two-point lead at 10-8. After another Kentucky point, Texas A&M coach Laura Kuhn unsuccessfully challenged an out call at 11-8 to burn her final challenge, trailing by three. The Aggies remained within two until a monster block from Tealer and kill from Stumler gave the Cats some separation at 15-10. Out of the media timeout, a long rally was ended by Stumler’s 11th kill of the afternoon, as she was only player in the match to have double-figure kills. Tealer and Stumler put on the pressure to give the Wildcats more separation, and at 19-11, forced A&M into calling a timeout. The Wildcats were able to continue their lead out of the A&M timeout, as freshman outside hitter Erin Lamb slammed her first kill to the floor to put Kentucky up, 22-12. The impressive performance from Kentucky sent Texas A&M into a second timeout at 23-12. Lamb was able to get the Cats to match point out of the timeout and Sophie Fischer slammed home the victory with a kill to give UK the sweep, 25-14.