Skip to content
You are here
HOME PAGE / 01 FEATURED / Chase Me If You Can–By Dr. John Huang 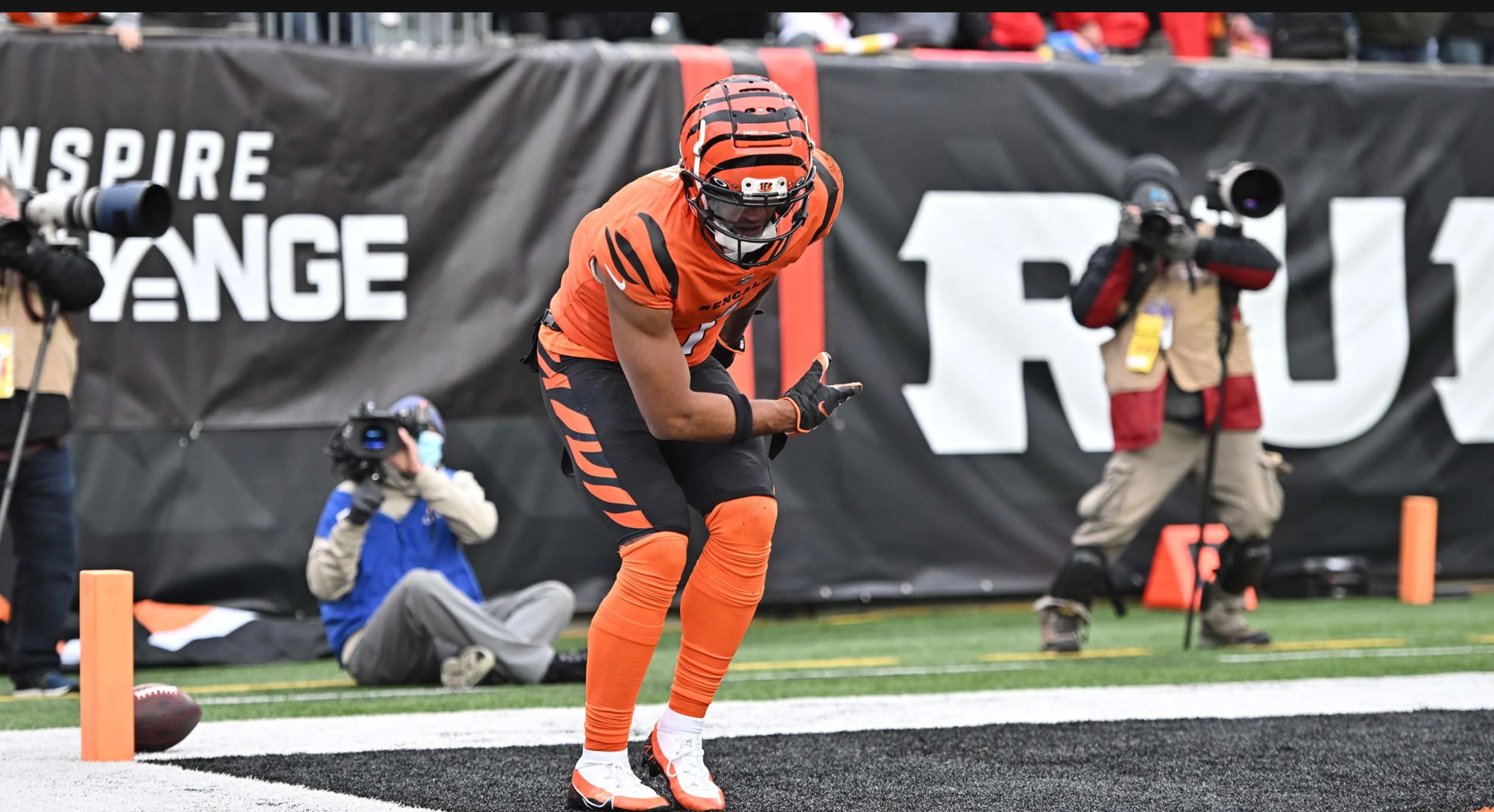 Ja’Marr Chase does the Griddy after catching an 18-yard touchdown pass from Joe Burrow in the second quarter (Photo credit Bengals.com)

I repeat—the Bengals are divisional champs, the first time as kings of the hill since 2015. It wasn’t easy and—as expected—there was plenty of drama along the way as the guys in the striped helmets scratched and clawed their way to an improbable 34 – 31 come-from-behind win over the previously red-hot Kansas City Chiefs.

Evan McPherson’s 20-yard field goal as time expired set off the victory celebration and a sigh of relief from head coach Zac Taylor.

With the score tied at 31 and 6:01 left on the clock, the Bengals (10 – 6) took the ball on their own 25-yard line and proceeded to march methodically down the field, setting up a first and goal from the Chief’s one-yard line. From there, three straight running plays netted zero yards. With less than 58 seconds left on the clock, the obvious call on fourth down would be to kick the chip shot field goal for the win, right?

Think again. With a suspect defense and still a minute left on the clock, it’s highly possible Patrick Mahomes would have pulled off one of those all-too-familiar game-winning touchdown drives to pierce the hearts of every single long-suffering Bengals fan.

So, Taylor decided to roll the dice and go for the kill. To the dismay of the 64,505 looking on incredulously in Paul Brown Stadium, Joe Mixon was stopped short of the goal line after catching a short pass from Burrow. What the heck was Taylor thinking?

But whoa…offsetting penalties gave the Bengals another shot. Surely they would kick the field goal now. But nooooo—Taylor elected to go for the jugular again. Desperate times call for desperate measures, I guess—especially when your defense can’t stop anybody. When Burrow’s pass fell incomplete again—this time to Tyler Boyd—a few “fire the guy” comments could be heard from some of my red-faced colleagues on press row.

Not so fast, my friend. Perhaps the Bengals are a team of destiny after all. Another penalty flag—this time an illegal use of hands penalty against Kansas City—came to the rescue. That beautiful yellow marker gave the Bengals four more downs from the one yard-line. That heavenly reprieve from above resulted in just enough kneel-downs to run the clock down for McPherson’s winning boot.

“You gotta go take this division,” Taylor answered, when asked about his decision to go for it on fourth down. “It’s not just kick the field goal and let Patrick Mahomes do something. I’ve got a ton of confidence in our defense to come up there. The things worth having, you gotta go get ‘em and not wait for someone to give them to you. I thought that’s what our guys did today.”

Did Taylor ever think of kicking the field goal after the offsetting penalties?

“No, If we’re going to go for it on the one, then we’re definitely going to go for it on the one inch line,” he answered adamantly. “We tried to run it in, but No. 95 Chris Jones is one of the best players we’ve ever played against, and I think he stepped up there, and their whole defense did. It’s an inch you’ve got to get–we couldn’t get it–so we went with the pass game on those last two plays. Fortunately, we got the call there at the end that allowed us to kick the field goal.”

So much for the drama. The real savior in this game was Ja’Marr Chase. I’ve watched a lot of professional football over the years, but the rookie wide receiver out of LSU’s performance today was one for the ages.

As if three touchdowns on 11 receptions weren’t enough, “Uno’s” 266 yards receiving also set a career-best single game and single season receiving record. Throw in the degree of difficulty on a couple of his grabs, and you can easily see how everybody who witnessed it left the game with mouths agape.

It takes two to tango, and Burrow—Chase’s LSU cohort—continued his amazing ascent into NFL superstardom. The 25-year-old phenom was 30-for-39 passing for 446 yards and four touchdowns. Along the way, he also broke Andy Dalton’s single-season yardage record set back in 2013.

“Having him as my quarterback feels similar,” Chase said about the NFL roll he’s on with his former college teammate. “We’re getting older and smarter, and things are working out.”

Down 28 – 17 at the half and 28 – 24 after three quarters, the “old Bengals” would have had nary a chance for a comeback. The team was 1 – 5 when trailing at the half, and Zac Taylor was 0 – 24 in his career when trailing after three quarters. With the talent this year at the offensive skill positions, however, anything seems possible with the “young Bengals.” As proof, they’re the first team this year in NFL history with a 4000-yard passer, 1000-yard rusher and two 1000-yard receivers who are all under 26 years old. That bodes well for the future.

But first things first. With the division wrapped up, the Bengals can now begin preparing for the playoff run. The last regular-season contest at Cleveland next week means nothing. The team can rest up and the coaching brain trust can start game planning for that long-awaited postseason action a fortnight from now.

The Cincinnati Bengals now can boast of a divisional title, a future Hall of Fame quarterback, an all-pro receiver, and a coaching wunderkind. It’s almost too good to be true—kind of like a dream. Enjoy the ride, and don’t wake up for at least couple of weeks.

Dr. John Huang covers professional sports for Sports View America. His latest books, KENTUCKY PASSION and FROM THE RAFTERS OF RUPP, are available in bookstores and online. You can follow him on Twitter @KYHuangs.