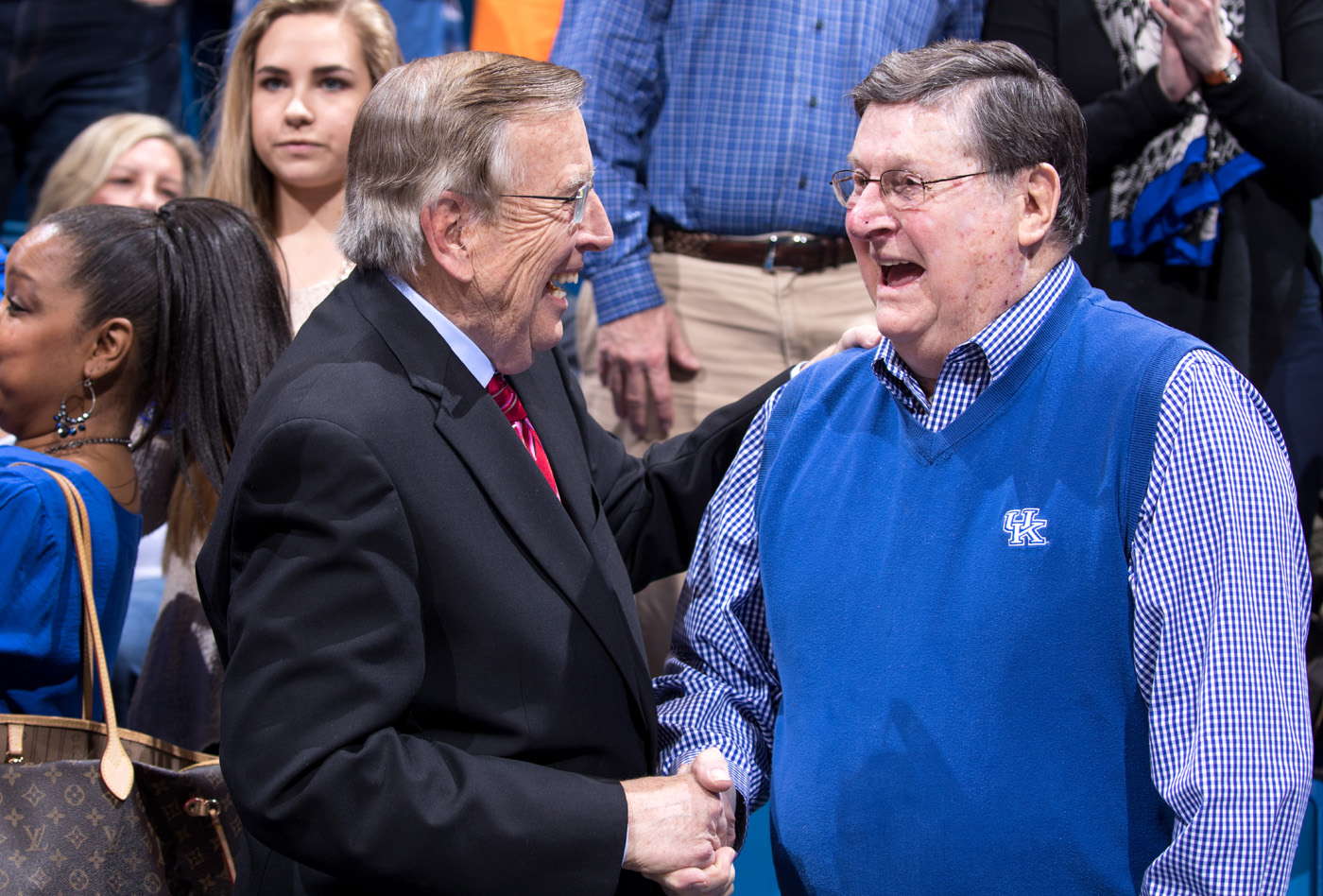 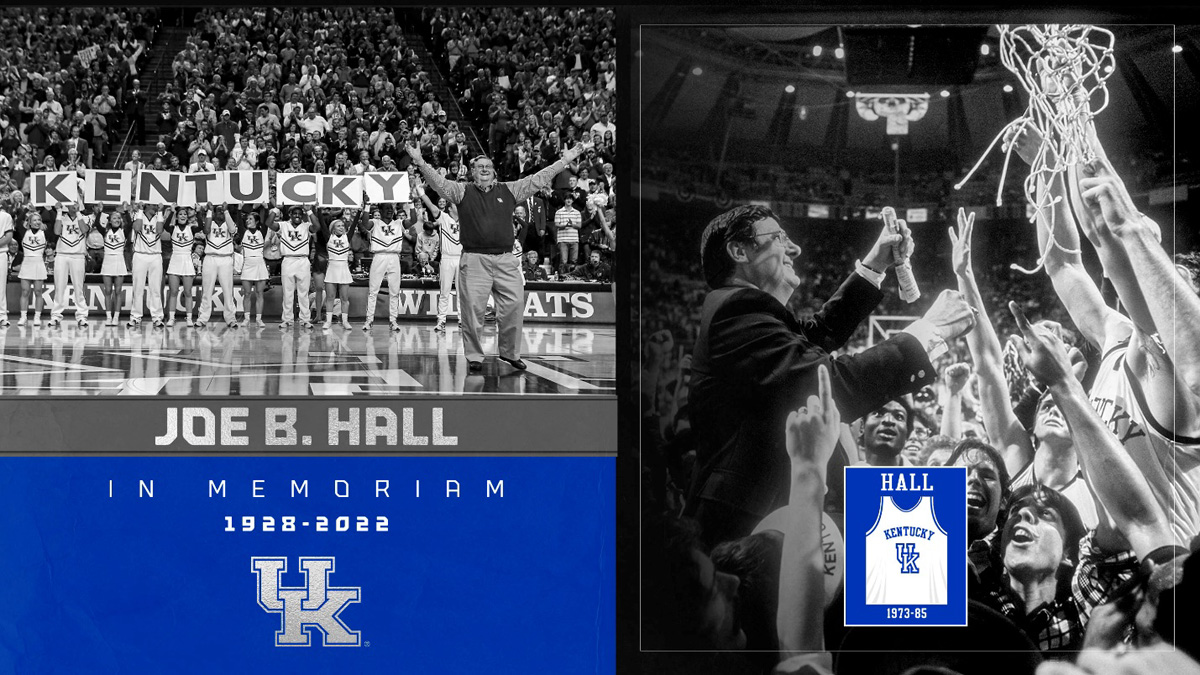 LEXINGTON, Ky. – Joe B. Hall, who faced the unenviable task of following the winningest coach in Kentucky men’s basketball history and carved out his own legacy with a national championship and three Final Four appearances, died Saturday morning. He was 93 years old.

“Coach Joe B. Hall – my friend, my mentor, and an icon in our state and in our profession – took over a program and carried on the winning tradition and legacy of excellence of Kentucky basketball,” current UK men’s basketball head coach John Calipari said. “He made it the job it is today with his hard work, his ingenuity and his great basketball coaching.

“Coach Hall always met me with a smile, including two days ago when I went to see him and hold his hand. He understood everything that was said, and as I prayed for him, he squeezed my hand tight. Coach Hall is beloved by everyone. What makes me happy on this extremely somber day is that before he left this earth, he knew how much all of us appreciated and loved him. I would ask that everyone keep him and his family in your prayers.”

Walking in the footstep of a Kentucky giant – the Baron of the Bluegrass, Adolph Rupp – Hall met the challenge head on by continuing the tradition of winning with hard-nosed defenses, stellar recruiting and development, and a passion for his players that featured a decade-plus of some of the greatest players in school history.

Hall’s crowning coaching achievement was the 1978 national championship, the school’s fifth title but the first in 20 seasons. He also guided the Wildcats to Final Fours in 1975 and 1984.

“Some people are larger than life. Others make life larger and better for all of us. In a life that knew the biggest of victories on the biggest of stages, Joe B. Hall did both,” University of Kentucky President Dr. Eli Capilouto said. “He helped coach some of the greatest figures in college sports, won championships and helped expand and enlarge the greatest tradition in college basketball. That’s the Joe B. Hall we all admired.

“The Joe B. Hall I was privileged to know was gentle and kind, unfailingly gracious and big-hearted. He told warm and funny stories, always made time for anyone and treated them all – no matter their station or walk of life — with respect and dignity. We lost a Kentucky basketball great. More importantly, we lost a great man, who lived a wonderfully big and loving life. We are deeply sad today with his passing, but much better for his living and what he gave to all of us as Kentuckians.”

Hall’s squads recorded a 172-62 (73.5%) record versus SEC competition during the regular season, winning eight regular-season titles in 13 seasons and one league tournament championship in seven tries.

“Coach Hall is an iconic figure in our state and was our greatest link to the history and tradition of Kentucky basketball,” UK Director of Athletics Mitch Barnhart said.  “The impact he made on our program, the University and the Commonwealth cannot be overstated.  As a native of Cynthiana, he lived the dream of being a Wildcat as a player, assistant coach and head coach while leading us to many of the greatest moments in our history.  He understood what it meant to the Commonwealth – he loved the University, Kentucky basketball and the people of Kentucky.

“After retiring from coaching, Coach Hall stayed close to the program, continuing to live here and giving so much to our community.  Representing this place was immensely important to him. He supported everyone in the Kentucky coaching chair and had a special bond with Coach Calipari, whom he embraced from day one and I know will dearly miss Coach Hall’s insight and wisdom. Our deepest condolences are with his family, friends and all who knew him throughout the Big Blue Nation.”

Hall, who grew up just 30 minutes north of the University of Kentucky in Cynthiana, Kentucky, began his association with UK as a student-athlete during the “Fabulous Five” era. He played one year of junior varsity and one year of varsity basketball before transferring to the University of the South in Sewanee, Tennessee, where he finished his eligibility and set a single-game scoring record. Following his college career, Hall toured Europe with the Harlem Globetrotters in 1951, but later returned to UK and completed his degree requirements.

His coaching career began at Shepherdsville (Ky.) High School in 1956. It continued at Regis College in Denver, where he spent five years (57-50 record), and Central Missouri State for one season (19-6 mark) before returning to UK as an assistant to Rupp on July 1, 1965. As an assistant, he spearheaded landing future All-Americans Dan Issel, Mike Pratt and Kevin Grevey.

Hall played a large role in the integration of Black student-athletes into the Kentucky men’s basketball program, first as an assistant coach under Rupp, then recruiting Reggie Warford as the program’s second Black recruit in his first freshman class. Four of his seven All-Americans were Black, and eight of the 13 players on his final team were Black. He also hired Leonard Hamilton, the program’s first Black assistant coach, and his 1978 national championship team was led by Jack “Goose” Givens and James Lee.

For all of Rupp’s success, the program had gone 20 seasons without a national title when Hall made the defining run of his career to the top of college basketball. In the opening game of the NCAA Tournament of that run, Hall courageously benched three starters with his team trailing at halftime. The reserves inspired a comeback, and UK pulled away. In the national title game, Kentucky defeated Duke 94-88 led by 41 points from Givens, still the most points scored by a Wildcat in an NCAA Tournament game.

“I was honored to have had an opportunity to play for Coach Hall, but the honor really grew when we got older and I got to know him as a friend as opposed to just a coach,” Givens said. “I wish I would tell you all the things I learned from him – not just about basketball – but about life and being a man. The friendship that we had the last 10 years of his life were some of the best days that I ever had with him. I’m going to miss him, but I hope and pray that my life is as long and as full as his life was.”

As successful as Hall was as head coach, assistant and player at Kentucky, he was revered in the latter stages of his life for his unwavering love of UK. Long after his coaching days, Hall remained a fixture at practices and games.

After Calipari was hired, Hall famously calmed Calipari down after his first practice when it became apparent to the new UK head coach he had his work cut out for him with a roster rebuild.

“The first practice I went to there were 22 guys,” Calipari said. “I thought I had a football team. I’m like, who are all these guys? There were 22 of them. I said, ‘Hold on. Hold on.’ He’s sitting there watching me do it. I was trying to figure out who’s who. I knew Patrick (Patterson) and a couple of the guys, but when it was done, and I go into the room with my hands like this [motions to covering up his face]. ‘Oh my God, what did I do? What have I done?’ And he walks in and puts his hand on my back, and he says, ‘You don’t worry. You are going to be great here. You watch. Don’t worry about one day.’ And that’s what the first thing was that he said to me. I’m just telling you, I’ve done this a long time. It is very unusual for the last coach to want the next one to win. There’s only going to be a few of us that are that way.”

As Hall became a mentor to Calipari, Calipari returned the favor by making sure Hall was embraced by the program. Hall had an open invitation to practice, and he took Calipari up on the offer by routinely attending multiple practices a week. He also had season tickets at midcourt just a few rows up, was the “Y” multiple times at UK games and never wasted an opportunity to let Calipari know that he should try his vaunted 1-3-1 zone defense. He remained a key figure in the Lexington and Cynthiana communities late in his life.

“Coach Hall will forever be remembered for his success in keeping the Kentucky men’s basketball tradition alive following Adolph Rupp,” said former player and UK Athletics Hall of Famer Kyle Macy. “Very few coaches have been able to follow a legend with the success Coach Hall did. His homegrown love and respect for the Kentucky program constantly motivated him to achieve that success. On a personal level, I have not only lost my former coach, but someone I considered a good friend. He will be missed.”

The revival of the Kentucky-Louisville rivalry happened under Coach Hall. Although the Wildcats lost to Louisville in the 1983 Mideast Regional finals – called the “Dream Game” – Hall’s team defeated the Cardinals twice the next season, including in the 1984 NCAA Tournament. The series has been played in every season since.

Once a rival with former Louisville head coach Denny Crum, the two would go on to team up for a five-days-a-week radio show for more than a decade that lasted until 2014.

Hall was a winner on the court, but his players best remember him by his impact in the community and his love for the state in the latter stages of his life.

The tradition of Midnight Madness started under Hall, when fans got a first glimpse in October of the team’s first practice. It has since evolved into Big Blue Madness, a celebration at a packed Rupp Arena to mark the start of the men’s and women’s basketball seasons.

Hall was key in the creation of the original Wildcat Lodge, the dormitory for the men’s basketball team that was just a few hundred feet away from the Wildcats’ practice facility at Memorial Coliseum. It was named in his honor. The new dormitory, the Wildcat Coal Lodge, features a bronze statue of Hall out front.

Hall was preceded by his wife of 55 years, Katharine, who died in 2007. His is survived by three children, daughters Judy Derrickson and Kathy Summers, and son, Steven Hall, and three grandchildren and three great grandchildren.

Funeral arrangements will be forthcoming.