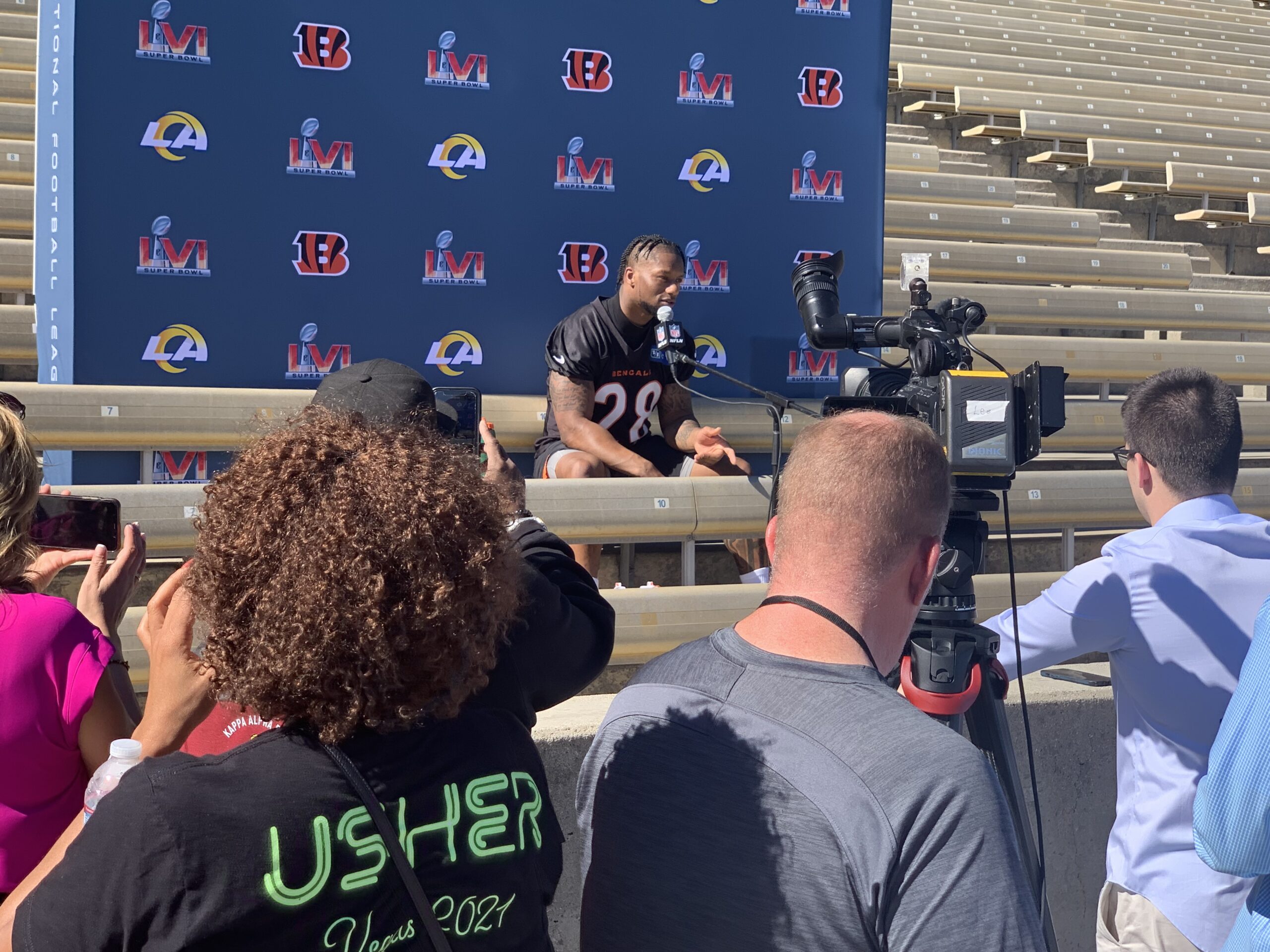 (Los Angeles, Ca.) – The Cincinnati Bengals appeared focused, locked, and loaded just a scant forty-eight hours leading up to Super Bowl LVI. The team no one thought was championship caliber at the beginning of the season is now suddenly poised to become king of the football hill.

If eighty-five degrees and possible record temperatures at SoFi Stadium isn’t enough to turn up the heat on Sunday, then pregame predictions by Tyler Boyd and Joe Mixon surely seared and sizzled your ear drums. The two key veteran players spoke to reporters on Friday at the only scheduled in-person media session prior to the big upcoming game.

At age twenty-seven, Boyd is the “old man” of this Bengals’ youth-laden receiving corps. He led the team in catches in each of the past three seasons (2018-20). This year, despite taking on a secondary role behind Ja’Marr Chase and Tee Higgins, Boyd still managed 828 yards on 67 receptions with 5 touchdowns. The second-round pick in the 2016 NFL Draft is only one of six Bengals ever to top 1000 receiving yards in consecutive seasons.

So how would the sixth-year player from Pittsburgh draw up the final script of such an unlikely Super Bowl season?

Fighting through adversity has been a key talking point from nearly every player interviewed this week. A team that went from league laughingstock (2 – 14 record in 2019) to laughing all the way to the league championship game definitely has a story worth telling. There’s a “team-first” narrative that is compelling and all pervasive.

“This moment for all of us has been huge because we never really had a successful season,” Boyd continued. “Getting to this moment is very joyful for us…As for the play-by-play [of how the game on Sunday finishes out], I think the best play in football is us being up and the clock is going down. And Joe [Burrow] lines up out there, and he says, ‘Hut,’ and takes a knee.”

That’s not exactly the answer I expected. I thought it’d be along the lines of a “Burrow to Boyd catch-and-run TD” just as the clock hits zero. Like I said, it’s a “team-first” culture with this entire Zac Taylor crew.

During the Friday media session on the beautiful UCLA campus, Joe Mixon was also toeing the company line. The fifth year running back from Oklahoma’s off-the-field problems have been scrutinized and well-documented in the past. I’ve seen him transformed, since, into a respected and mature team leader. His battle back from adversity culminated in a Pro-Bowl selection this year. Mixon also threw in some love to the fans when describing his ideal Super Bowl script.

“It feels like a fairy tale story,” he explained. “I’m really living the dream. I wouldn’t trade this for nothing, man. It’s the best feeling to come out here and potentially win the Super Bowl—to be able to give the city its first Super Bowl win. I just know what it means to true die-hard Bengals’ fans, and I’m here to do whatever I can to put us in the best position to win.”

These Bengals’ players have shown repeatedly over time that they can handle the big stage. The biggest question remaining now is whether they’ll be able to handle Aaron Donald and the formidable Rams’ pass rush. Although four-point underdogs going in, I think the team’s resiliency and pride will ultimately pull them through. My script says that the game ends off a last-second interception of an errant Matthew Stafford pass. After a scintillating 24 – 20 win, the Lombardi trophy comes to Cincinnati for the first time ever.

“At the end of the day, a lot of the people can’t make it out,” Mixon shouted out to all the fans back in the Queen City. “But at the same time, we’re going to hold it down for you all. We’re going to bring that trophy back to the city. We’re planning to have that parade on Wednesday.”