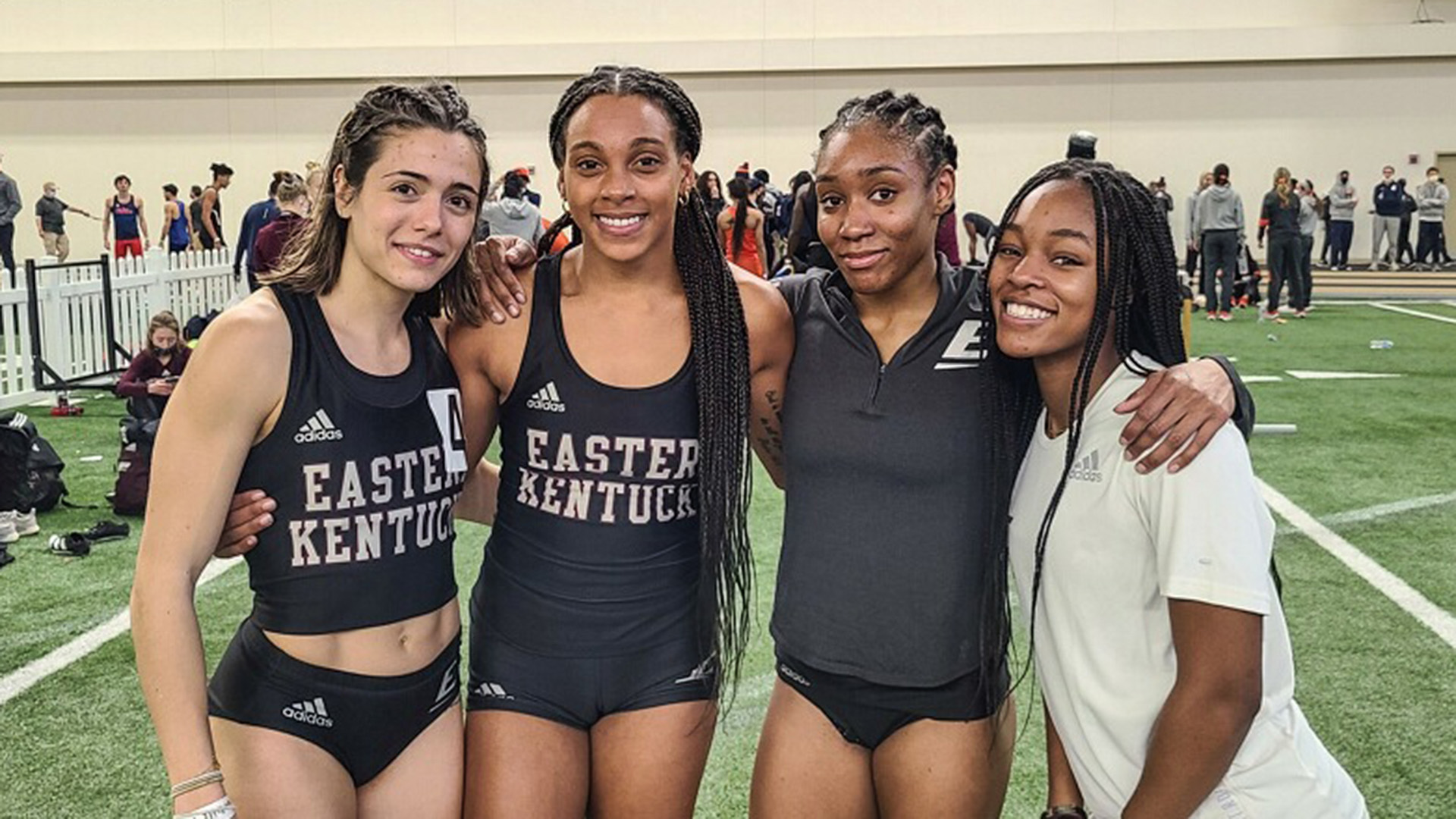 Senior Felicia Phillips kicked off the record breaking by winning her heat of the women’s 400 meters at the Music City Challenge on Saturday in Nashville. Her time of 55.33 edged the previous indoor school record of 55.55, set by Bianca Forbes in 2012.

It is currently the fastest 400 meters time in the ASUN this season.

Phillips then teamed up with seniors Quantasia Perry and Alicia Recio and freshman Aniya Matthews to take down the long-time EKU women’s 4×400 meter relay record at the conclusion of the meet. The quartet won their heat with a blistering, ASUN-best time of 3:46.63. That mark bested the previous school record of 3:47.54, a record which had stood since 1990.

A couple hours later, in Boston, All-American Ahmed Jaziri (re)wrote his name in the record books. Jaziri demolished his own school record in the men’s 3,000 meters with a time of 7:47.34 at the BU Valentine Invitational. The native of Rades, Tunisia finished third overall, and was the second collegiate finisher, in a race in which Notre Dame’s Yared Nuguse broke the NCAA record in the event (7:38.13).

Jaziri’s time is a six-second personal-best and the fastest in the ASUN this season by 16 seconds. It also broke the Tunisia record and gives Jaziri the World Championships standard in the event.

Three Colonels broke into EKU top-five lists at the Music City Challenge on Saturday. Recio ran a personal-best time of 2:11.75 in the women’s 800 meters. That is No. 5 all-time at EKU and is currently No. 4 in the ASUN this season.

Freshman Jan Badia-Celma followed that up by winning his heat of the men’s mile with a time of 4:06.14. That is one of the fastest miles ever clocked by an EKU freshman and it currently ranks No. 4 in the ASUN this season.

Near the end of Friday night, Christian “Joy” Scott ran a personal-best 24.88 in the women’s 200 meters. That puts her at No. 6 in the ASUN so far this season.

Grace Kilroy started Saturday off on the right foot for the Colonels. She dropped a near-15 second personal best in the women’s 3,000 meters, clocking a time of 9:45.21.

Pedro Garcia-Palencia and Nikodem Dworczak built off that momentum by running personal bests in the men’s 3,000 meters. Garcia-Palencia went 8:15.44, while Dworczak was not far behind in 8:18.48.

Badia-Celma then doubled back from his mile on Friday night to run a personal-best 1:51.68 in the 800 meters on Saturday. That time currently ranks No. 3 in the conference.

In field events, Samuel Carter highlighted the meet for the Colonels, posting a big personal best of 47-11.75 in the men’s triple jump. That mark moves him up to No. 2 in the ASUN this season.

The EKU track and field team has this upcoming weekend off before competing in its first-ever ASUN Indoor Championships February 25-26 in Lynchburg, Virginia.