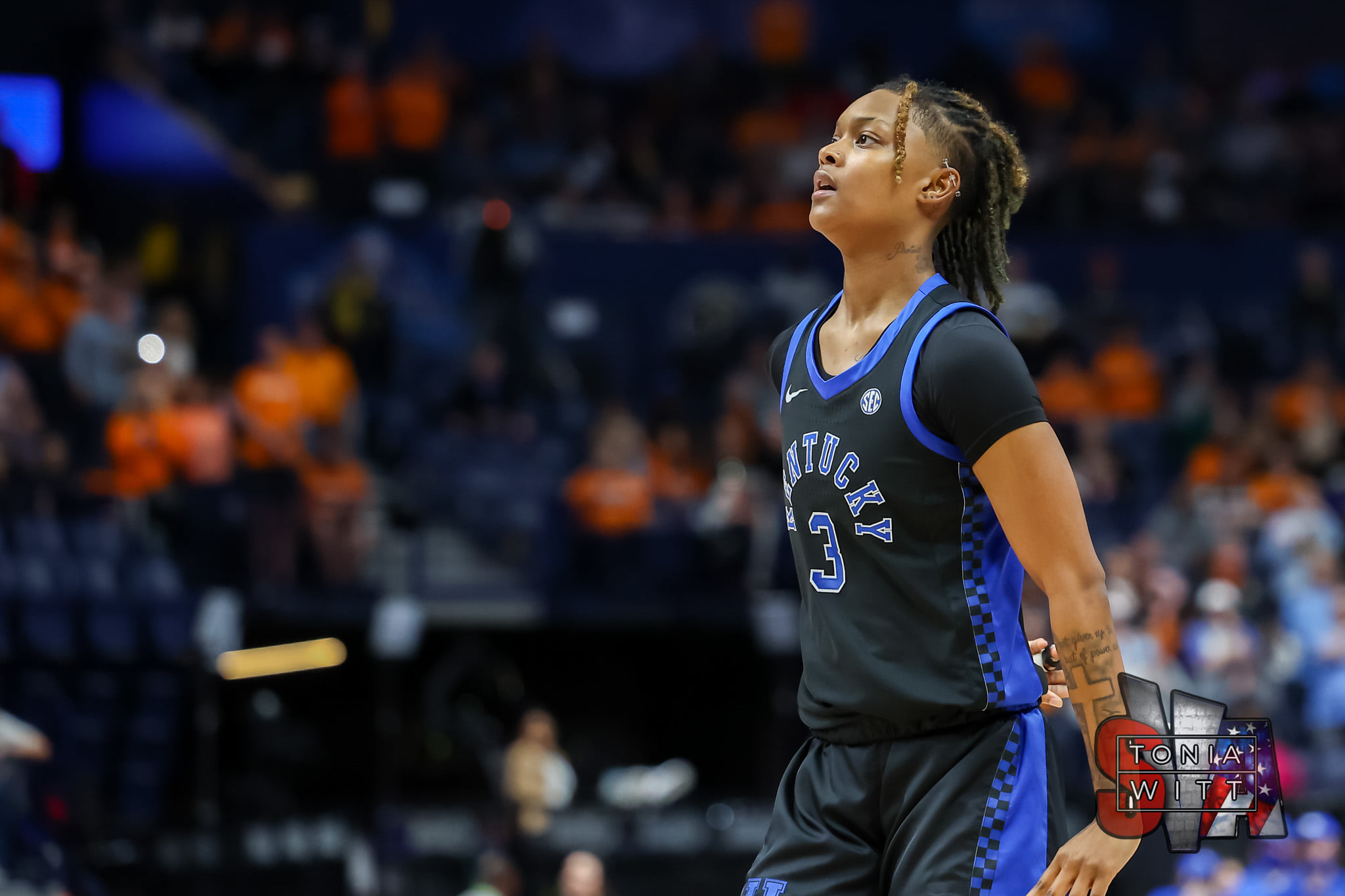 For the first time in 40 years, Kentucky has won the SEC Tournament title

NASHVILLE – Dre’una Edwards hit a three-pointer with 4.2 seconds remaining, lifting Kentucky past No. 1 South Carolina 64-62 on Sunday in the championship game of the Southeastern Conference Women’s Basketball Tournament.

Edwards’ three capped an 11-0 run that helped UK overcome a double-digit, fourth-quarter deficit to win. Kentucky scored 14 of the last 16 points in the game to win.

Edwards led the Cats in scoring with 27 points, 19 of which came in the second half. For the game, she made 11 of 21 from the field, including three of five from behind the arc, and both of her free throws. She added nine rebounds, an assist and a blocked shot.

South Carolina (29-2) scored first on an Aliyah Boston basket but Kentucky answered on a Treasure Hunt three. After Zia Cooke hit a three for the Gamecocks, Howard tied the game on a left-side jumper. The game would also be tied at 7-7 before Boston got a layup and free throw to make it 10-7 South Carolina.

After Kentucky cut the advantage to 10-9 on an Edwards basket, South Carolina scored five in a row to grab a 15-9 edge. But Kentucky answered that with layups by Olivia Owens, Edwards and Edwards again to tie the score at 15-15.

Boston would score again to give the Gamecocks a 17-15 lead, but Kentucky got a jumper from Edwards and a free throw from Howard to take an 18-17 advantage with 1:19 left in the first. South Carolina would score the final two baskets of the period to lead 21=18 after 10 minutes of play.

Both teams had trouble scoring to start the second period. Kentucky went more than six minutes before scoring, falling behind 28-18 in the process. Robyn Benton finally ended the drought with a runner to cut the deficit to 28-20. Howard would hit a free throw to cut the deficit to seven but South Carolina got the final bucket of the half to take a 30-21 advantage into the break. Edwards led UK with eight points in the first half.

In the third period, Kentucky scored first on a three by Edwards. Boston then scored on a layup for South Carolina, but Edwards answered with a layup of her own to make it 32-26 Gamecocks. It was at that point that South Carolina went on a 7-0 run to extend the lead to 39-26 with 6:24 left in the period.

Kentucky would briefly stop the run on a pair of Edwards free throws but the South Carolina onslaught continued. The Gamecocks would score six of the next eight points to lead 45-30 with 4:45 to play in the third.

The Cats, however, mounted a run of their own to stay within striking distance. UK went on an 8-2 run to get within nine, 47-38, with 2:39 left in the third. Howard would do her best to keep the Cats close, scoring Kentucky’s last five points of the period, but South Carolina led 55-43 after three quarters.

South Carolina scored the first two points of the fourth period on a pair of Boston free throws. But Kentucky would score the next seven on layups by Edwards and Howard, then a three from Edwards, cutting the deficit to 57-50 with 6:49 to play.

The Cats would continue to chip away at the South Carolina lead. A Benton three cut it to 60-53. Then, after a Boston jumper, the Cats got a layup from Hunt, another from Howard and another from Edwards to make it 62-59 with 1:50 to play.

Kentucky got within one on another Edwards layup, this one with 1:13 to play. After a defensive stop, the Cats got possession with 43.9 seconds remaining. But South Carolina forced a turnover and took over with 18.3 seconds left.

UK fouled South Carolina’s Cooke with 16 seconds left and she missed both free throws. Kentucky called timeout with 11 seconds to go, setting up the final play where Edwards would hit the three from the top of the key to give the Cats a 64-62 lead.

South Carolina had no timeouts remaining, so the Gamecocks could only muster a half-court heave at the buzzer, that missed, on their final possession.

Kentucky will next play in the NCAA Tournament, with the opponent and location to be determined. The NCAA Women’s Basketball Tournament Selection Show will be next Sunday, March 13.