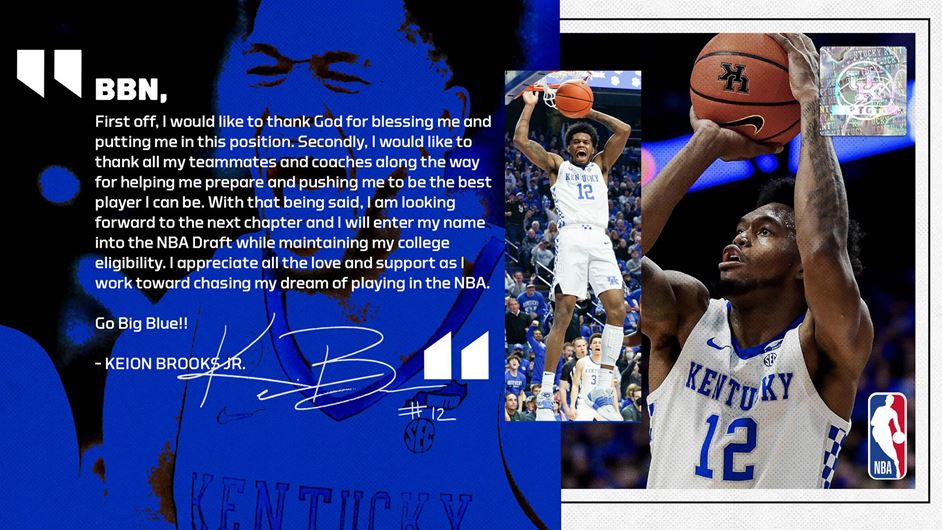 Brooks does not plan to hire an agent at this time, although he can sign with an NCAA-certified agent, receive feedback and still return to school. The deadline to return to school is June 1.

“First off, I would like to thank God for blessing me and putting me in this position,” Brooks said. “Secondly, I would like to thank all my teammates and coaches along the way for helping me prepare and pushing me to be the best player I can be. With that being said, I am looking forward to the next chapter and I will enter my name into the NBA Draft while maintaining my college eligibility. I appreciate all the love and support as I work toward chasing my dream of playing in the NBA.”

Players can submit paperwork to receive evaluations from the NBA and participate – if invited – in the NBA Draft Combine which is slated to take place May 16-22.

At this time, Brooks plans to utilize the current rules in place.

“The rules in place for these young men to make decisions are there for a reason and Keion is utilizing it exactly the way he should,” UK head coach John Calipari said. “He has made strides during his time here and has continued to improve every year. His thoughtfulness and maturity not only as a player, but as a man, will allow him to go through this process and make the best decision for his future. He and his family know they have my full support with whatever they decide.”

Brooks has appeared in 80 games and made 42 starts for the Wildcats during his three-year career. He has steadily improved in every facet of the game each season.

As a junior, Brooks averaged a career-high 10.8 points per game and shot a career-best 49.1% from the field. He also produced career bests in steals, blocks, assists, 3-pointers, and total rebounds.

He was tabbed the Southeastern Conference’s Player of the Week after leading the Wildcats in scoring at 19.5 points per game in a pair of victories on Jan. 25 and 29. Brooks was sensational for Kentucky in a career performance on the road at No. 5 Kansas. The Fort Wayne, Indiana, native scored a career-high 27 points and added eight rebounds as UK won 80-62 over the Jayhawks to help the SEC secure a 6-4 win in the Big 12/SEC Challenge.

Brooks scored 15 straight points for UK at one point in the second half as the Wildcats staved off a Kansas rally that got within 14 points, but no closer, in the second half. He made 9 of 10 at the free-throw line, both career highs.

Brooks scored in double figures in 17 games this season and started all 33 games in which he appeared.

Furthermore, he has been an exceptional leader off the court as well. He’s a two-time SEC Academic Honor Roll member. During his sophomore season, he was one of 11 Division I men’s basketball student-athletes to serve on the National Association of Basketball Coaches Player Development Coalition, providing the NABC with valuable perspective and feedback on college basketball-related issues.