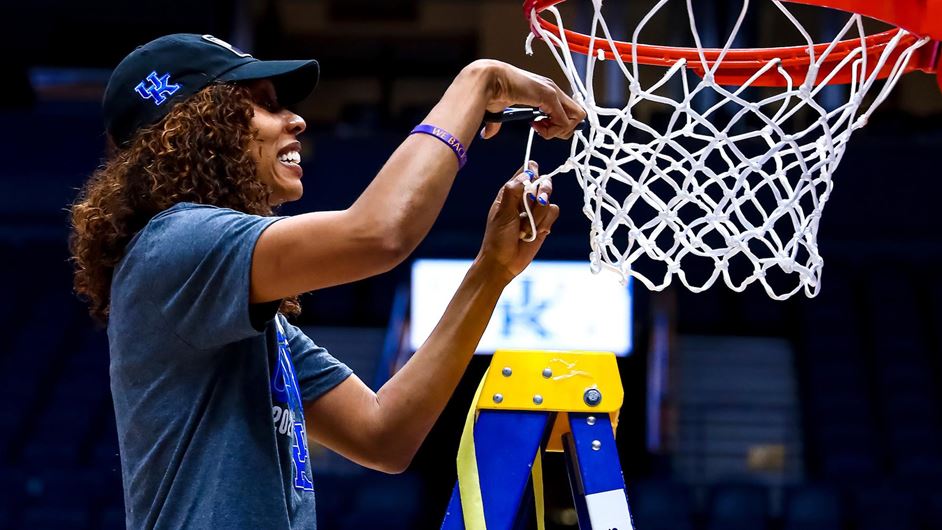 LEXINGTON, Ky. – After leading Kentucky to its first Southeastern Conference Tournament title in 40 years and becoming the program’s first head coach to lead the Wildcats to the NCAA Tournament in consecutive seasons to start a tenure, Kyra Elzy has signed a contract extension through the 2027 season.

University of Kentucky Director of Athletics Mitch Barnhart announced the amendment to the contract Monday. The completed amendment will be posted on the UK Office of Legal Counsel’s website.

On the way to the title, Elzy led Kentucky to wins over Mississippi State, No. 6-ranked LSU, No. 18-ranked Tennessee and No. 1-ranked South Carolina. Elzy became the fifth coach in league history to win the tournament title in the first two seasons on the job, joining Joe Ciampi (Auburn), Jim Foster (Vanderbilt), Melanie Balcomb (Vanderbilt) and Holly Warlick (Tennessee).

The turnaround for Kentucky this season overall was amazing. The Wildcats sat 9-11 overall and 2-8 in the SEC on Feb. 10 and ended the season winning 10 of its last 11 games and earned a six-seed in the NCAA Tournament after claiming the SEC’s automatic qualifying spot. The 10-game winning streak was the most for Kentucky under Elzy, while all 10 wins were against league foes, marking only the second time in program history the Wildcats have achieved that feat. During the stretch, five straight games were won by 15 or more points, marking the first time in program history UK has done that against league opponents.

Elzy is 37-21 in her two seasons at the helm of the program. In her first season, the native of LaGrange, Kentucky, was tabbed the Women’s Basketball Coaches Association Spalding Maggie Dixon NCAA Division I Rookie Coach of the Year.

The successful first season of the Elzy Era was highlighted by UK earning a top-20 listing in the Associated Press Top 25 and USA Today/Coaches Top 25 all season long. During the 2020-21 season, Kentucky defeated five ranked opponents, including back-to-back wins against top-15 teams for the first time since 2013. The two wins led Elzy to be named the espnW National Coach of the Week and the United States Basketball Writers Association tabbed UK its first-ever team of the week. UK was one of 10 teams in the nation to have four wins against top-25 NCAA NET teams entering the tournament. Elzy also became the first UK women’s basketball head coach to lead her team to the NCAA Tournament in their first season at the helm.

The national prominence of Kentucky women’s basketball the last decade has been a direct reflection of Elzy’s leadership. In her decade-plus with the program, Elzy has helped the Wildcats to eight NCAA Tournaments, including two Elite Eight appearances. In 2012, Elzy helped guide Kentucky to the SEC Regular-Season Championship, which was the program’s first since 1982. All told in Elzy’s tenure on the Kentucky sideline, the Wildcats have won 224 games, including 95 league games and 33 victories over ranked opponents. Six times Elzy has helped Kentucky to a 20-win season, including 28 wins in 2010 and 2012.

“I will always believe that there is no better place in the world for a young woman to live out her academic and athletic careers than the University of Kentucky. I want to thank Mr. Barnhart, President Capilouto and our women’s basketball administrator Tiffany Hayden for believing in me and having a shared vision for this great program. I am 100 percent confident in what we offer our student-athletes here at Kentucky. Our coaches and staff commit ourselves daily to our players. Their individual successes, on and off the court, is our collective success as a program. As seasons come and go, our focus and commitment haven’t and won’t waver from the expectations set for this program. We have a core group of talented and driven players returning along with an exciting group of signees that cannot wait to wear those eight letters across the front of their jersey. They model the core values our program will continue to be built on: Accountability, Hard Work, Discipline, Servant Leadership and FAMILY. We are counting down the days until we can all be together again inside Memorial Coliseum. Until then, we will continue to work to bring home more championships.”

“We’re excited to extend Kyra and continue our investment in women’s basketball and in her as a coach and positive role model in our community. After the adversity the team faced throughout the season, the turnaround at the end of the year was impressive – defeating the eventual national champion and winning our first SEC Tournament Championship in 40 years, a strong step in building the championship vision we all have for this program.”