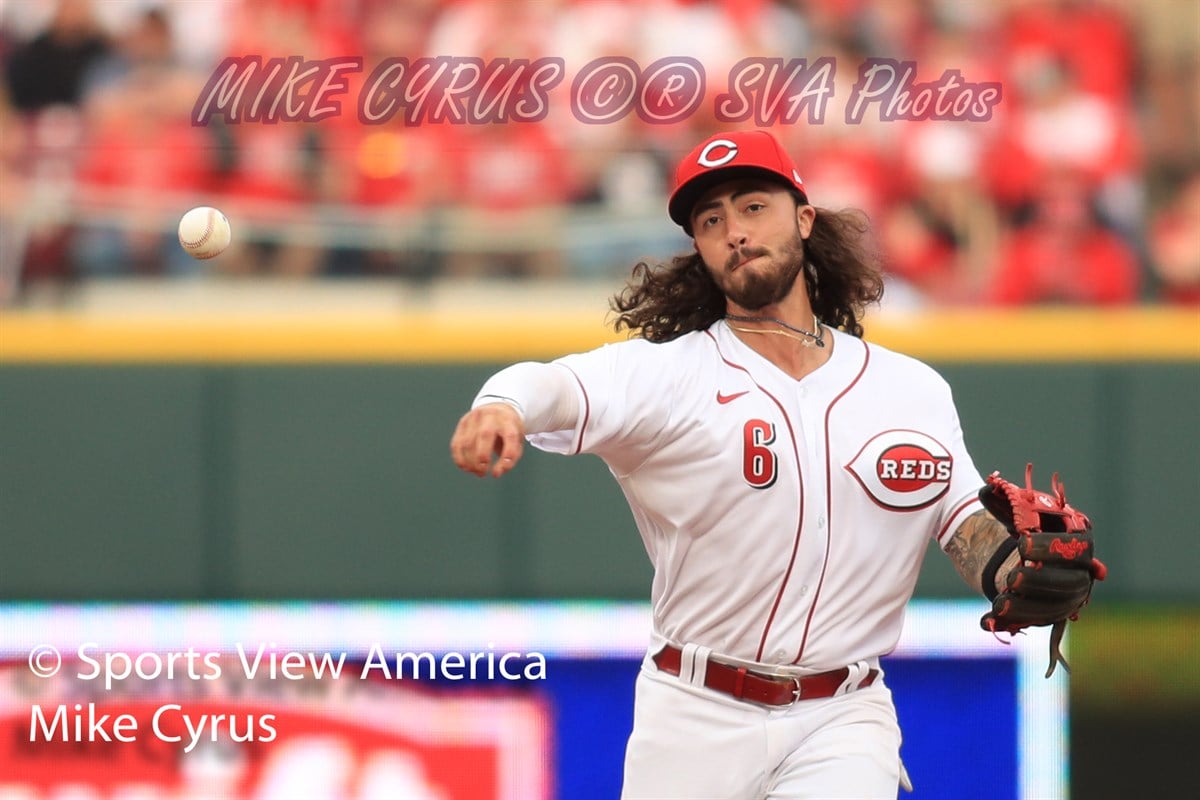 Jonathan India looks to build upon his NL Rookie of the year season on a team searching for offense firepower (Photo Mike Cyrus).

“It’s a big day, a dream come true,” said Nodolo. “Not the result I was looking for. But other than that, I’ll go back, look at video, look at what I did do good. Take that away and just build off of what we need to do for next time.”

You only get one Major League debut, and Nodolo seemed to fully savor the moment as he posed for pictures with family and friends outside the locker room. Was he nervous at all the night before his big start?

“I slept pretty good,” he explained. “My routine’s the same for every game. The rain didn’t affect me at all, especially since it wasn’t that long. I think my routine and everything was good to go.”

“I thought he handled it extremely well,” said Bell, who’s entering his fourth season at the helm. “I thought the composure was there. He had an inning where he lost the strike zone a little bit. But he wasn’t wild. He wasn’t missing by a ton. He was pulling his slider a little bit. He seemed calm. He handled it well. It’s gonna happen. I actually think it was a step for him to get this game in and have some struggles but bounce back. In some ways, it was really a successful debut.”

Jake Fraley’s solo homerun in the bottom of the fifth and Tyler Stephenson’s two-run shot in the eighth were the lone offensive bright spots for a Cincinnati team sporting a dearth of firepower and a multitude of unanswered questions across their pitching staff.

The loss drops Cincinnati to 2 – 4 in a season that promises a plethora of ups and downs. The Guardians, meanwhile, improve to 4 – 2 on the year.

By the way, I’ll never get used to the Guardians nickname. They’ll always be the Indians in my book. Can you imagine Charlie Sheen entering the stadium to Wild Thing with Guardians blazoned across his chest? It just wouldn’t work.

A lot of things didn’t work for Cincinnati today. Their bats remained largely silent, and I’m just not sure where their offense is going to come from this year. Gone are Eugenio Suarez 3B, Nick Castellanos RF, Jesse Winker LF, and Tucker Barnhart C from a team that could at least score some occasional runs. Of course, Joey Votto is still around for his 16th season, and Jonathan India—last year’s NL Rookie of the Year—looks to build upon his blossoming young career. Nick Senzel—if he can stay healthy—and the two Tylers (Stephenson and Naquin) will be counted on heavily to get their bats going.

Despite the questionable moves by management, my hope is that there’ll still be enough talent and moving pieces to keep the team competitive. I realize I’m a lot more optimistic than many. Other media colleagues—including Jeff Drummond of Cats Illustrated—have chosen to boycott the Reds for their supposed long-running apathy in putting together a winning product on the field. Cost-cutting is one thing, but team president Phil Castellini sticking it to a loyal fan base is another thing altogether.

Hmm? Perhaps I should feel guilty for following along. To be honest, I missed covering the team during the year of Covid and really looked forward to getting back to a Major League ballpark. Although Castellini walked back his comments and later apologized, maybe we’re all just enabling his haughtiness and arrogance with our coverage and attendance.

“We’re focused on moving forward,” Bell said, when I asked him about the Castellini comments. “This clubhouse—that’s my focus. We’ve got a lot to be grateful for, a lot to be thankful for, a lot to be positive about. We got a whole season ahead of us to do great things. Not only for our team but for the city and our fans. So, I’m looking forward to doing our part.”

They say that winning cures all. With this year’s Reds, I’m taking it one step at a time and keeping my expectations in check. It’s way too early to be making any snap judgments, but here’s hoping they still have a pulse by the end of the month.