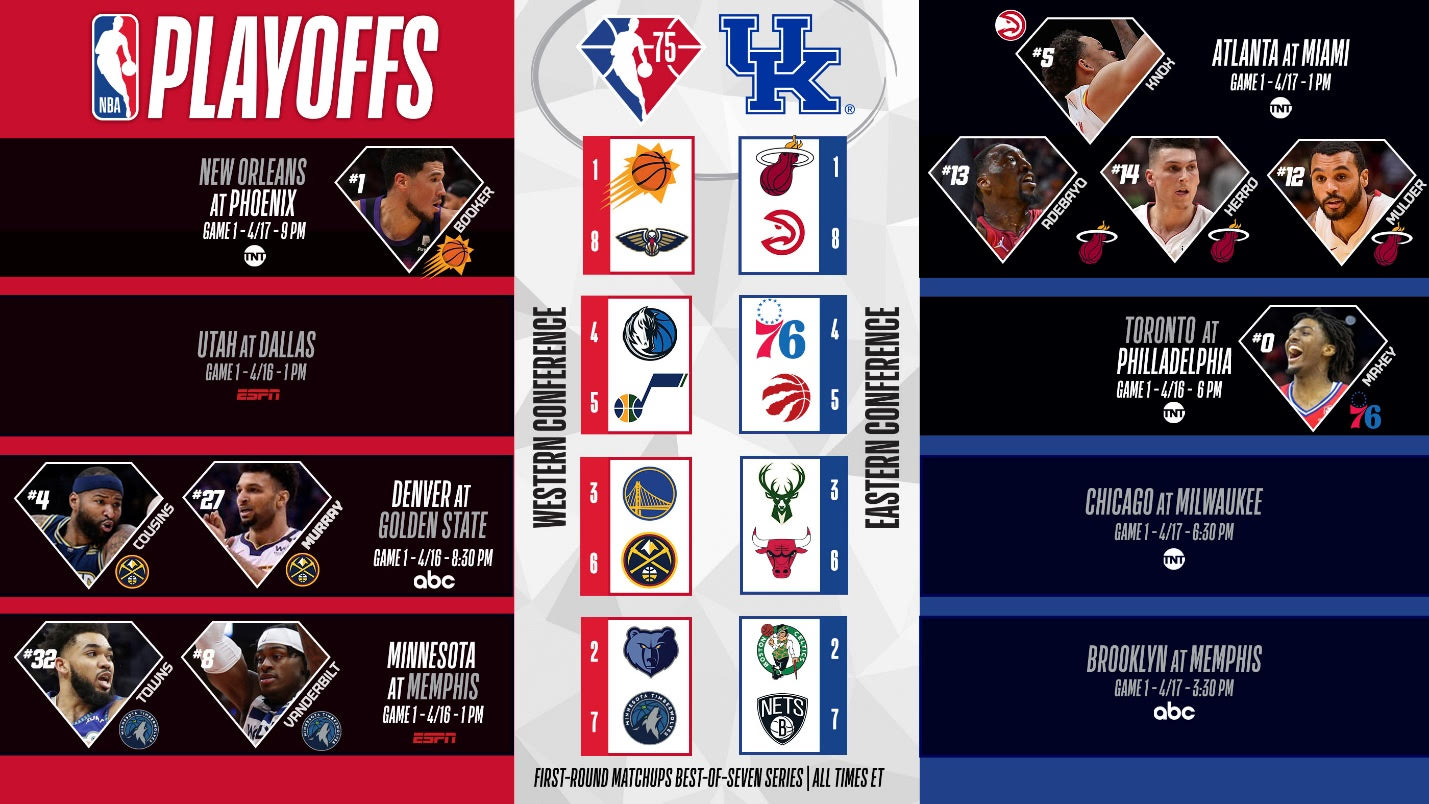 LEXINGTON, Ky. – After leading the NBA with the most players on opening-day rosters and the most to play in this year’s NBA All-Star Game, it should come as no surprise that the Kentucky men’s basketball program will also lead the way with 10 players participating in the 2022 NBA Playoffs. The Playoffs begin Saturday.

Kentucky’s 10 players led the Southeastern Conference which has 43 total players participating in the 2022 NBA Playoffs, the most of any conference.

Play gets underway on Saturday. Towns and Vanderbilt will be the first to tip off as the Timberwolves visit Memphis at 3:30 p.m. ET with the game airing on ESPN. Maxey’s 76ers and Cousins and Murray’s Nuggets will also play on topening day.

Booker’s Suns own the No. 1 overall seed in the Western Conference and finished the season with the best record in the NBA during the regular season. The Suns will have the final game of the weekend at 9 p.m. on TNT on Sunday. The Heat and Hawks open the Sunday television window at 1 p.m.

A staggering 27 players from Kentucky were on 2021-22 NBA opening-day rosters (including two-way and inactive lists), the most of any school. The number grew to 32 players throughout the regular-season as several players earned roster spots and 10-day contracts throughout the year.

Kentucky has enjoyed unprecedented success at putting players in the NBA under John Calipari. In the 12-plus seasons of the Calipari era, 43 players have been selected in the NBA Draft, more than any other school. Included in the recent run are 32 first-round picks, three No. 1 overall selections (Anthony Davis, Towns and John Wall) and 21 lottery selections. A staggering 27 players from Kentucky were on 2021-22 NBA opening-day rosters (including two-way and inactive lists), the most of any school.

Calipari’s players are not only reaching the next level, but they are also succeeding when they do. Since 2010, eight Calipari-coached players have garnered 28 All-Star selections. Derrick Rose (from Memphis) was named league MVP in 2011. Five of his players have been tabbed All-NBA (Rose, Wall, Davis, Cousins and Towns), three have been named NBA Rookie of the Year (Rose, Tyreke Evans and Towns), Julius Randle was tabbed the NBA’s Most Improved Player in 2021 and 15 players from Calipari’s first 11 teams at Kentucky have made the NBA All-Rookie teams.

Using figures compiled by basketball-reference.com and spotrac.com, Calipari-coached players only (which includes Rose but not Rajon Rondo) have amassed nearly $3.4 billion in career NBA contracts. In the 12 seasons Calipari has been the head coach at Kentucky, his players have totaled nearly $3 billion in NBA contracts.

Calipari and Kentucky had multiple players selected in the first round of the NBA Draft in 11 straight seasons and have at least one first-rounder in 12 straight, the only program since the draft went to two rounds in 1989 to accomplish such a feat. No other school or coach in the country has had a first-round pick in each of the last 12 seasons. Calipari is the only coach in the history of the sport to have four players drafted No. 1 overall (Rose – 2008, Wall – 2010, Davis – 2012, Towns – 2015).

Of the 70 players who have finished their college careers at Kentucky under Calipari (through the 2020-21 season), 43 were selected in the NBA Draft, a 61.4% success rate. Another eight of those made the NBA, and the majority of the rest were walk-ons.