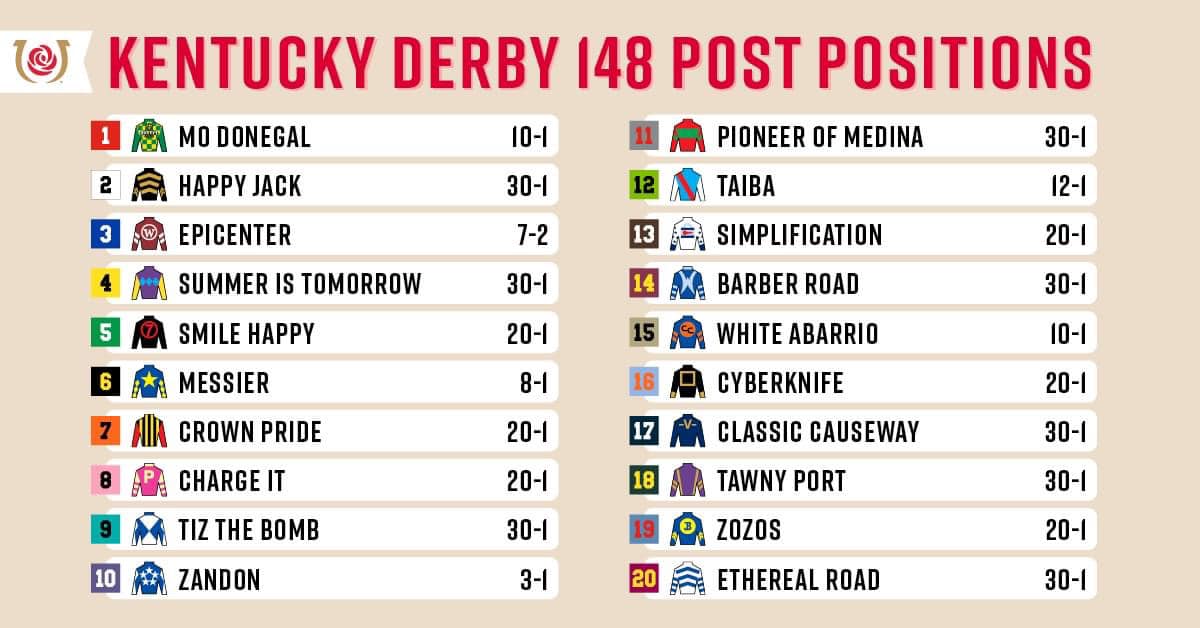 If you ask most trainers and owners of the serious contenders about their post position draws for the 148th running of the Kentucky Derby, you would probably find little discontent. In my humble opinion, the connections for Charge It, Zandon, and Crown Pride should be thrilled, while those of Epicenter and Mo Donegal most certainly would have preferred a different post.

Quote of the day goes to Epicenter’s trainer, Steve Asmussen, who said, “You don’t know what posts to complain about until after the race is run”. Obviously, he would have preferred a post in the middle. And, while jockey Joel Rosario is arguably one of the best jockeys in this country, his gate breaks sometimes leave us scatching our heads.
I am not at all opposed to the draws for Taiba, Simplification, and White Abarrio, either, as they are outside and should have options for tactics and less chances for immediate traffic trouble.
I am a bit surprised that Mike Battaglia made Zandon the morning-line favorite over Epicenter. Yes, he rallied from a troubled trip to win the Bluegrass Stakes, and had an amazingly impressive last work. But he was soundly beaten by Epicenter in the Risen Star and nosed out by Mo Donegal in the Remsen.
Post-time favorite may be a function of  how much Jim “Mattress Mack” McIngvale wagers and on whom. The Texas billionaire reportedly plans to put more than three million dollars on Epicenter. That would undoubtedly make him the favorite when the gates open. I remember a year when Michael Jordan moved the odds on the toteboard at the last minute, and that did not end well for him.
Final thoughts on post positions:
*** The 17 hole has never won the Kentucky Derby. That honor goes to Classic Causeway this year and I feel fairly confident the streak will remain unbroken.
*** The 6 hole is 2 for 92 since 1930. Messier has a decent shot as a legitimate contender. He could make it 3 for 93.
*** Posts 5 and 10 have produced the most winners with 9 and 10, respectively. However, recent wins have come more from the outside.
*** Inside posts produced winners many years ago. But, in recent history, the rail has been the kiss of death. Running head on into the rail is not conducive to a win. The new gate is supposed to alleviate that situation to some degree. Jury is still out as it is relatively new.
***  For every path off the rail, a horse has to run more than 25 feet farther. Do the math. Drawing post positions 15-20 and being unable to tuck in ( getting hung out wide)  makes for a much longer race. And, at a mile and a quarter, that can be a game changer.
I know there are folks out there who wager on a specific number, regardless of the horse. There are some who bet the grays. Some who bet the color of the silks or the name. As a handicapper and student of the game, I rarely (if ever) go that route. However, if it works for you and makes it fun, go for it!
Once again, Happy Derby! And as my equine artist friend, Jaime Claire Corum says, “May the horse be with you!”